Home | News | Scientific News | A ‘butterfly effect’ discovered, through which a single change at telomeres controls the ability of cells to generate a complete organism

eLife. A ‘butterfly effect’ discovered, through which a single change at telomeres controls the ability of cells to generate a complete organism 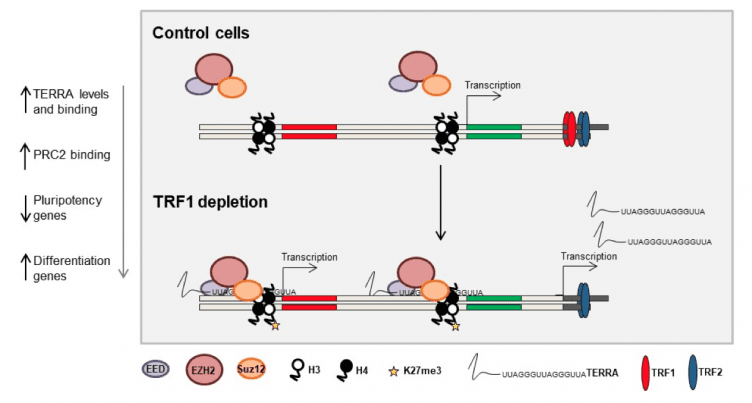 Model of the role of TRF1 in controlling pluripotency. In normal iPS cells (induced pluripotent stem cells) TRF1 is highly expressed, the Polycomb (PRC2) complex (encompassing EDD, EZH2 and Suz12) is weakly bound to the genome and pluripotency genes are expressed. After TRF1 depletion, TERRA increases its expression, this event results in PRC2 recruitment to genes involved in the control of pluripotency and differentiation and establishment of the K27me3 epigenetic mark, altering their expression. /CNIO

The TRF1 protein is only present at telomeres, but it has an effect on the entire genome that is essential for the pluripotency state

The new result is published this week in the journal eLife

Pluripotent cells can give rise to all cells of the body, a power that researchers are eager to control because it opens the door to regenerative medicine and organ culture for transplants. But pluripotency is still a black box for science, controlled by unknown genetic (expression of genes) and epigenetic signals (biochemical marks that control gene expression like on/off switches). The Telomeres and Telomerase Group, led by Maria Blasco at the Spanish National Cancer Research Centre (CNIO), now uncovers one of those epigenetic signals, after a detective quest that started almost a decade ago.

It is a piece of the puzzle that explains the observed powerful connection between the phenomenon of pluripotency and telomeres -protective structures at the ends of chromosomes-, a kind of butterfly effect in which a protein that is only present in telomeres shows a global action on the genome. This butterfly effect is essential to initiate and maintain pluripotency.

The DNA of telomeres directs the production of long RNA molecules called TERRAs. What the CNIO researchers found is that TERRAs act on key genes for pluripotency through the Polycomb proteins, which control the programs that determine the fate of cells in the early embryo by depositing a biochemical mark on the genes. The on/off switch that regulates TERRAs, in turn, is a protein that is only present in telomeres; this protein is TRF1, one of the components of the telomere-protecting complex called shelterin. The new result is published this week in the journal eLife.

Why is a telomere gene required for pluripotency?

It has been known for about fifteen years how to return the power of pluripotency to cells by acting on certain genes. However, the researchers noticed that this recipe did not work if the TRF1 gene was turned off. Moreover, TRF1 was one of the most activated genes when pluripotency was induced. These facts intrigued the researchers. Why was TRF1, a gene whose product is only found in telomeres, activated so much, and how could this be essential for pluripotency?

“We could not understand how a gene that deals with telomere maintenance has such a profound effect on a global process like pluripotency,” says Maria Blasco, Head of the Telomeres and Telomerase Group at CNIO.

To find an explanation, they decided to carry out a random search by analyzing the changes in the expression of the entire genome when the expression of TRF1 was prevented – something like blindly casting a large net into the sea to see what is in it. “We saw that TRF1 had an enormous, but very organized, effect,” explains Blasco.

The expression of many genes was altered, and more than 80% of them were directly related to the phenomenon of pluripotency. The researchers also noted that many of these genes were regulated by Polycomb, a protein complex that is very important in the early stages of embryonic development and that directs cells to specialize into the different cell types of the adult body.

The link is TERRA

But they still did not understand what the link between Polycomb and TRF1 was. Last year, however, Blasco’s Group discovered that the TERRA molecules that are produced in telomeres communicate with Polycomb and that together they are involved in building the telomere structure.

The researchers decided to analyze the interaction between TERRA and the entire genome, and sure enough, they found that TERRA stuck to the same genes that were regulated by Polycomb. This suggested that TERRA was the link between TRF1 and pluripotency.

TRF1 “exerts a butterfly effect on the transcription of pluripotent cells, by altering the epigenetic landscape of these cells through a novel mechanism, which involves TERRA-mediated changes in the action of Polycomb,” the researchers write in eLife.

As Rosa Marión, first author of the study, explains, “these findings tell us that TRF1 is essential for reprogramming specialized cells and for maintaining pluripotency.” The study has been funded by the Spanish Ministry of Science, Innovation and Universities, the National Institute of Health Carlos III, the Community of Madrid, World Cancer Research and the Botín Foundation and Banco Santander through Santander Universities.