Cancer Cell. A new strategy to prevent the most aggressive tumours from generating resistance to chemotherapy 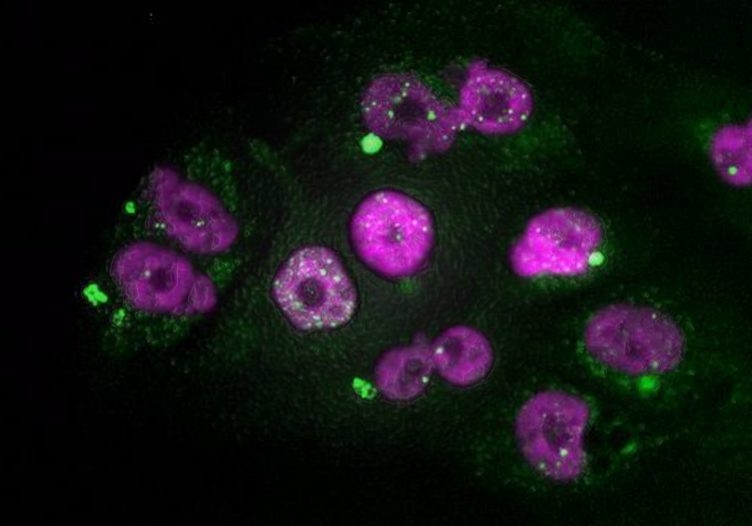 Pancreatic adenocarcinoma tumour cells showing signs of damage in the DNA of the nucleus (white dots) and micronuclei (in green), after treatment with taxol followed by CDK4/6 inhibitors. /CNIO

CDK4/6 inhibitors are effective in certain types of cancer because they stop the multiplication of tumour cells, but they cannot be used together with chemotherapy since chemotherapy only acts against cancer cells that are actively multiplying

The researchers decided to change this approach and use CDK4/6 inhibitors not together with, but after chemotherapy. This strategy prevents tumour cells of pancreatic adenocarcinoma, one of the most aggressive tumours with the worst prognosis, to recover from the damage caused by chemotherapy; these positive results have been observed both in mice and in tissues of patients

This strategy can open new avenues to improve the effectiveness of therapies in thousands of patients who are currently being treated for various types of cancer with classical radiotherapy or chemotherapy; the authors intend to test this approach in clinical trials, starting with trials for breast and lung cancer

One of the most frequent problems when treating cancer is that the tumours develop resistance to therapies, that is to say, at some point treatments cease to be effective to stop tumour growth. This is especially relevant in patients with aggressive diseases such as pancreatic cancer or patient with metastases, who for this reason often undergo frequent changes in treatment. Now, a study led by the Spanish National Cancer Research Centre (CNIO) in collaboration with researchers from the Weill Cornell Medicine Center and Pfizer Inc. (United States), proposes a novel combined approach to avoid pancreatic cancer resistance to chemotherapy, and thus achieve that the treatments eliminate these tumour cells effectively. The work will be published in the journal Cancer Cell.

In recent years, drugs have been developed that inhibit the action of CDK4 and CDK6 and are very effective in stopping the growth of advanced breast cancer. Their clinical use, in combination with hormone therapy, has been approved in the United States since 2015 and in Europe since 2017 for patients with this type of cancer. The success of this combination has made it the standard treatment for these patients. However, until now it was not clear if these benefits could be extended to other types of cancer.

“A problem with CDK4/6 inhibitors is a consequence of their mechanism of action that prevents tumour cells from multiplying,” explains Marcos Malumbres, Head of the CNIO Cell Division and Cancer Group and principal investigator of the project. “Most of the current chemotherapies –involving, for example, platinum or taxol derivatives–, act only on tumour cells that are dividing. Therefore, if we inhibit CDK4/6 and thus prevent these cells from dividing, we prevent chemotherapies from working properly. For this reason, until now it was believed that we could not combine CDK4/6 inhibitors with classical chemotherapy.”

Not at the same time, but after

During her predoctoral work at the CNIO, researcher Beatriz Salvador decided to design a new strategy in which CDK4/6 inhibitors would be used not at the same time as chemotherapy, but after chemotherapy to prevent the recovery of tumour cells. The results of the study show that administering CDK4/6 inhibitors after the drugs commonly used against various metastatic tumours prevents tumour cells from resisting these treatments and growing again after chemotherapy.

The study was carried out both in genetically modified mouse models and in mice with grafts from patients with pancreatic adenocarcinoma, one of the most aggressive tumours with the worst prognosis. While tumour cells treated with taxol or other agents repair the damage caused by these therapeutic agents in a few days, subsequent treatment with CDK4/6 inhibitors prevented this repair of the tumour cells and caused them to continue accumulating damage, thus preventing that they started growing again. “All animals treated with this combination showed a stable tumour, while mice that were not treated this way died rapidly,” continues Malumbres.

Classical chemotherapy is still the most common treatment for patients with metastatic cancer, not only for breast and pancreatic cancer but for most tumour types. “Being able to use CDK4/6 inhibitors to prevent tumour cells from recovering from these treatments can open new avenues for improving the effectiveness of these therapies in various types of cancer that are currently treated with classical radiotherapy or chemotherapy,” Malumbres says. That is, this finding could have a positive impact on thousands of patients who are currently being treated with these therapies. “However, this strategy must be validated in the clinic. We are currently in contact with pharmaceutical companies to address this proposal in clinical trials, probably in breast and lung cancer.”

This study was funded by the Spanish Ministry of Science and Innovation, the National Institute of Health Carlos III, the European Regional Development Fund, the Community of Madrid, Pfizer Inc. and the Spanish Association Against Cancer (AECC).