The work validates the c-Raf protein as a therapeutic target, identified a few years ago by the same CNIO researchers

Tumour regression has been associated with low long-term toxicity

A study published in Cancer Cell by researchers from the Molecular Oncology Programme at the Spanish National Cancer Research Centre (CNIO) shows how the elimination of the c-Raf kinase by genetic manipulation causes the regression of Kras oncogene-driven advanced lung tumours in a genetically designed mouse model that faithfully reproduces the natural history of this tumour. It has also been shown that the elimination of the c-Raf protein produces very tolerable toxic effects. This opens up a new possibility for the development of therapies against tumours for which there are still no selective medicines and must therefore be treated with cytotoxic drugs, that, as it is known, are not effective and produce abundant side effects. 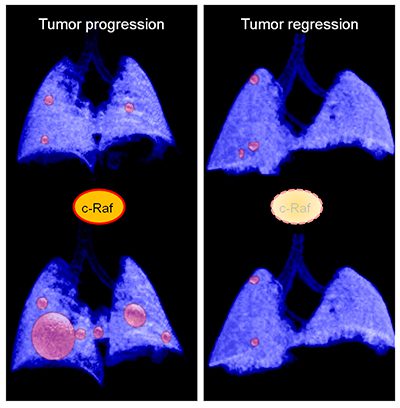 One in four human solid tumours harbours mutations in KRAS, some of them, such as pancreatic, lung and colorectal adenocarcinomas are associated with very poor prognosis. The alteration of this gene directly and indirectly affects cell proliferation and differentiation through the activation of multiple signalling pathways, key events in tumour development. However, there are no approved compounds in the clinic that selectively target these pathways present in these carcinomas. Blocking these oncogenic signalling pathways without affecting normal homeostasis is “one of the greatest challenges of precision medicine,” the authors note. In the case of KRAS signalling, the attempts made to date to inhibit the MEK and ERK kinases, although effective in preventing the development of the tumour, have been associated with unacceptable toxicity. Lung cancer is the leading cause of cancer-related deaths worldwide, accounting for an estimated 1.8 million new cases per year. Non-small-cell lung carcinoma (NSCLC), which is the most frequent subtype of lung cancer, also carries mutations in KRAS in up to 30% of the cases. Additionally, the 5-year survival rate for lung cancer remains below 15%, thus underscoring the urgent need to improve the current treatment for these cancer patients.  In this new study, researchers have genetically engineered a new mouse model that has allowed c-Raf to be eliminated not only in advanced lung tumours but systemically throughout the body of the animal, and thus be able to predict the potential toxicity of drugs that block the activity of c-Raf may have: “That is, a scenario that makes it possible to translate these results to the clinic in the near future”. As explained by Monica Musteanu, one of the paper´s lead authors, this study shows that the elimination of c-Raf “provides a significant therapeutic benefit that results in the regression of most tumours with very acceptable levels of toxicity”. However, the authors warn that in this study, the therapeutic effect observed requires the elimination of the protein, something that at the moment is not possible to achieve by pharmacological strategies. Since c-Raf is a protein kinase, in principle, the results described in this study could be validated by using selective inhibitors of this enzyme´s activity. In fact, the main priority of the authors at this time is to determine to what extent the therapeutic activity observed depends on the c-Raf kinase activity. The results derived from these ongoing studies will serve to define what pharmacological strategy may be applied in the future to treat cancer patients. This research has been funded by the European Research Council, EU-Framework Program, Spanish Ministry of Economy, Industry and Competitiveness, Autonomous Community of Madrid, AXA Research Fund, Spanish Ministry of Education, Instituto de Salud Carlos III.