The new cellular mechanism, called the endocycle, encourages the formation of platelets, the cells needed to coagulate blood

In mouse models, endocycles can help to control thrombocytopenia, a disease caused by a deficit in platelet production that causes heavy haemorrhaging

Thrombocytopenia is a disease characterised by a lower platelet level than normal. Platelets are tiny cells that participate in the coagulation of blood. Patients usually suffer uncontrolled bleeding that gives rise to hematomas and haemorrhages, and even death. Understanding how these cells are produced by the body, then, could be of great use for alleviating the illness, whose incidence increases exponentially in those patients who undergo chemotherapy. Such is the gravity of the symptoms in these patients that they can even lead to the suspension of the treatment.

A study published today by the Spanish National Cancer Research Centre’s Cell Division & Cancer Group in the prestigious journal Developmental Cell describes how the cells that give rise to platelets, megakaryocytes, can be reprogrammed artificially into platelets to rebuild their levels in the blood. As Marcos Malumbres, the study’s lead researcher, says, “the results can not only help treatment of thrombocytopenia, but also encourage the design of improved therapies to treat cancer.”

Platelets are produced in a very peculiar, rare way in humans, or even in other animal cells: megakaryocytes grow during their development to a point in which they become giant cells and then they ‘break’ to form miniscule cells called platelets. This growth impulse occurs via several rounds of duplication of the genetic material that produce large cells with a greater number than usual of complete sets of chromosomes.

AN ALTERNATIVE SOURCE OF PLATELETS

Via the use of genetically modified mice, Malumbres’s group has explored the cellular growth agents that orchestrate this process. “Whilst the elimination of the main proteins that regulate megakaryocyte growth generates, as we thought, a reduction in the production of platelets, this didn’t happen when we removed Cdk1 [a key protein for the process],” says Malumbres, adding that even “when Cdk1 was absent, the megakaryocytes were able to grow in size in a similar way to normal cells.”

Marianna Trakala, the first author of the research, studied how it was possible for megakaryocytes to increase in size to produce platelets using advanced video-microscopy techniques. “This analysis revealed that cells deficient in Cdk1 underwent cellular reprogramming towards a process known as ‘endocycles’, which can also be seen in other types of cells, such as certain cells in the placenta,” says Trakala. Endocycles allow megakaryocytes to increase in size in a different manner than normal. “This behaviour is the result of cell plasticity responding to different stress situations.”

The identification of this new way of generating platelets is not just simple scientific curiosity, but it could have medical applications: “We immediately asked ourselves if by reprogramming the cell cycle towards endocycles we could correct the thrombocytopenia induced in other models,” says Malumbres. To that end, his group, working together with Juan Méndez, Sagrario Ortega and Mariano Barbacid’s CNIO groups, eliminated Cdk1 in mice with severe thrombocytopenia. The loss of Cdk1 was able to increase the number of platelets and reduce thrombocytopenia in these animal models.

As the authors of the study mention, the ability of these cells to undergo reprogramming can be useful in different situations in which thrombocytopenia recovery is necessary. The results, they believe, could also help to “design better cancer therapy treatments by describing the different requirements that normal or tumour cells have towards cell cycle regulators. Blocking Cdk1 or other cell cycle proteins is lethal for tumour cells but does not affect megakaryocytes; this suggests possible uses for already available inhibitors against these factors in different neoplasms such as pro-megakaryocytic leukaemias.”

The study has been funded by the La Caixa Foundation, the Ramón Areces Foundation, the Ministry of Economy and Competitiveness, the Community of Madrid and the European Union. 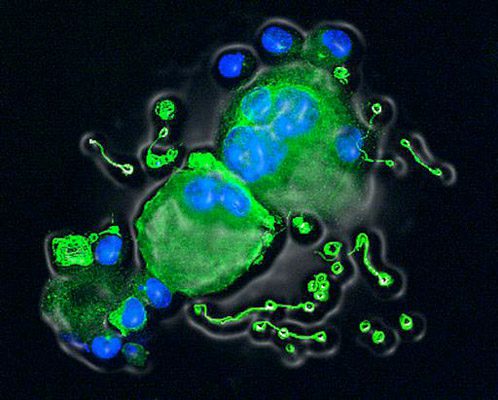