Home | News | Basic Research | The CNIO opens up a new avenue for combating the deterioration in blood stem cells caused by ageing, chemotherapy and radiation therapy

Nature Communications. The CNIO opens up a new avenue for combating the deterioration in blood stem cells caused by ageing, chemotherapy and radiation therapy

By increasing the levels of CHK1, a gene implicated in supervising DNA replication, they were able to alleviate the foetal anaemia suffered by the mouse embryos and prevent death in 40% of the cases

This is a first step towards the development of potential treatments for anaemia caused by a deficient activity of these stem cells, such as the aplastic anaemia in cancer patients receiving chemotherapy and radiation therapy

A research conducted by Juan Méndez, Head of the DNA Replication Group of the Spanish National Cancer Research Centre (CNIO), sheds light on the molecular mechanisms of ageing of the stem cells responsible for regenerating blood cells and opens up a new avenue for reducing their progressive functional decline with age. In the medium or long term, it may also pave the way for the development of therapies to control aplastic anaemia, one of the most common side effects of chemotherapy and radiation therapy affecting cancer patients undergoing treatment. The study will be published this week in the journal Nature Communications.

In 2014, Méndez participated in an international study led by researchers from the University of California San Francisco (USA), published in Nature, in which they discovered the cellular mechanism responsible for the deterioration with ageing of the stem cells that generate red blood cells, platelets and white blood cells that make up the immune system. Now, CNIO researchers have managed to replicate this new phenomenon in mouse embryos.

To do so, in these embryos, they reduced the levels of the MCM3 gene, one of the components of the MCM complex responsible for separating the two strands of the DNA double helix during replication. DNA replication is an essential process by which, when a cell is about to divide, it makes an exact copy of its genome, so that each of these copies will be passed along to its two future daughter cells. The cells need to maintain high levels of MCM during the DNA copying process; otherwise a phenomenon known as replication stress takes place, which can cause irreversible damage to the genome.

“When we reduce the levels of the MCM3 gene in the entire organism, we observe that replication stress especially affects the stem cells that give rise to the other blood cells and, in particular, the red blood cell precursors,” explains Méndez. “In adult organisms, the production and maturation of red blood cells takes place in the bone marrow, but during embryonic development it occurs mainly in the foetal liver. In animals with MCM3 deficiency, the stem cells of the foetal liver are deteriorated and the embryos develop a severe form of anaemia that prevents them from being born. We could say that replication stress turns foetal stem cells, which should be in perfect working order, into very old cells. We have verified this finding in transplantation experiments, where foetal cells with replication stress were unable to adequately reconstitute the blood system in the recipient animals.”

The researchers managed to prevent embryonic lethality by increasing the levels of another gene, CHK1. “CHK1 is one of the genes responsible for protecting cells from replication stress. It supervises DNA replication: when something goes wrong, CHK1 slows down or halts cell division until the problem has been resolved.” The mice subjected to replication stress due to the loss of MCM3, but with higher levels of CHK1, showed less pronounced anaemia, with 4 of every 10 embryos developing normally and completing their gestation.

According to the authors of the study, “an interesting implication of this work is that the type of anaemia caused by replication stress is very similar to the aplastic anaemia that arises as a complication in patients receiving chemotherapy or radiation therapy, precisely because these treatments introduce massive damage in the DNA of proliferating cells. A path to be explored in future studies will be to extend these results to novel therapies against this anaemia, while also contributing to mitigating the effects of ageing on blood stem cells.”

The first three authors of this paper are predoctoral researchers Silvia Álvarez, Marcos Díaz and Johanna Flach. Researchers from the Genomic Instability Group, led by Óscar Fernández?Capetillo, the Spanish National Cardiovascular Research Center (CNIC) and the University of California Francisco, UCSF (USA) have collaborated in the project. This research was funded by the Spanish Ministry of Economy and Competitiveness. 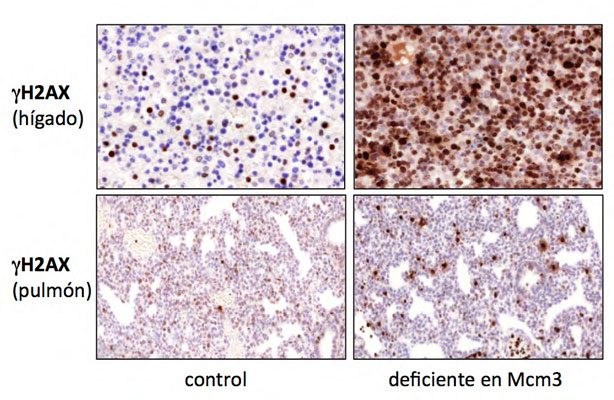