The mutation found in the POT1 gene, causes a rare hereditary syndrome in which patients present multiple tumours, including cardiac angiosarcoma (CAS)

It is now possible to identify carriers and intervene early. Currently, familial CAS patients have a poor chance of survival (four months on average) because the tumour is diagnosed when it is in an advanced phase

The work is a collaboration between the Human Genetics Group, headed by Javier Benítez, and the Telomeres and Telomerase Group, headed by María Blasco, and will be published this week in ‘Nature Communications’

A few years ago, Javier Benítez, director of the Human Genetics Group at the CNIO, received a call from Pablo García Pavía, from the Cardiology Unit of the Puerta de Hierro University Hospital. This cardiologist was treating two brothers with a rare form of cancer, cardiac angiosarcoma (CAS). Could the experts in genetics do something? “At that time we tried a few ideas, but unsuccessfully,” says Benítez. We have had to wait for modern genome analysis techniques to discover the brothers’ genetic problem. The finding opens a way to identify CAS families who are carriers of a mutation in the gene responsible for the disease. Family members could then benefit from an early diagnosis and the appropriate treatment.

Researchers in Benítez’s group recently reSevaluated the case of the brothers with CAS. After sequencing their exome — the part of the genome that is translated into protein and therefore the one that most influences the state of the organism —, they found that the cause of the illness was a mutation in a gene called POT1.

The identification of this gene led them directly to another CNIO group, the Telomere and Telomerase Group, headed by María Blasco. POT1 is one of the proteins that comprise the protective shield around telomeres — the structures that protect the tips of chromosomes — and it has recently been identified as responsible for other forms of hereditary cancer: melanoma and familial glioma. Blasco’s group is not only one of the leading groups in the field of telomeres, but has also participated — together with the groups headed by Carlos López-Otín and Elías Campo — in the first description of the mutation of this gene in human cancer (chronic lymphocytic leukaemia).

Cardiac angiosarcoma is a rare but malignant disease. In the case of hereditary CAS, the median survival expectancy is only four months because the disease is diagnosed at an advanced stage. Until now, no related gene has been identified.

CNIO researchers also observed that hereditary CAS occurs in families with a high incidence of other types of cancer. This is similar to what is observed in people affected by the so-called Li-Fraumeni syndrome, which is caused by a mutation in the tumour suppressor gene — nicknamed the genome guardian — P53. However, POT1, but not P53, was found mutated in the families affected by CAS.

The discovery of the new mutation proved to be even more significant from a clinical perspective, given that it identified carriers at risk of developing cardiac angiosarcoma and possibly other tumours.

As Benítez explained, “in the past, we simply didn’t have anything that could help in identifying these people at risk, because there were no markers for familial CAS or for families with a syndrome similar to Li-Fraumeni without P53 mutations. This study uncovers one of the genes that explains the high incidence of cancer in some of them.”

“The translation of these results into the clinic is immediate,” says Blasco. “In fact, we are already helping families that carry this mutation.”

The CNIO Familial Cancer Consultancy, headed by Miguel Urioste at the Fuenlabrada Hospital, is already evaluating about a dozen families. A Monitoring Unit for asymptomatic carriers has also been established at the Puerta de Hierro University Hospital. The aim is to offer these people genetic counselling and clinical surveillance for early detection and treatment.

The researchers hope this discovery will make it possible to identify more carriers who are unaware of their risk. With this in mind, national and international groups and centres dedicated to familial cancer research in general, and cardiogenetics in particular, have been approached to notify them of this finding and to expand the study with more cases and families.

Oncologists, cardiologists, geneticists and pathologists should also be informed so that they can send in samples of the cases they encounter among their patients.

AN ESSENTIAL SEQUENCE FOR CHROMOSOME STABILITY

This research project confirms that POT1 plays a novel role in the development of different forms of hereditary cancer.

The key is in the telomeres. When anomalies occur in the telomeres, the chromosomes become unstable, which, in turn, leads to extended genomic instability. POT1 is a central component of the telomeres that functions incorrectly when mutated.

The mutation identified in this case is located in a region of POT1 that is highly preserved from an evolutionary point of view and, therefore, very important. The experiments carried out on structural models as well as in cells, by Oriol Calvete and Paula Martínez, respectively, reveal that this mutation prevents the protein synthesised by POT1 from binding the telomeres. This results in high genomic instability and, consequently, a greater risk of cancer.

Martínez and Blasco are working on an animal model for this mutation, with the aim of developing novel treatments against human tumours that carry the mutation.

Another line of study that opens up is to try to understand the role played by this mutation in non-familial sporadic cardiac angiosarcoma.

This work has been funded by the Government of Spain, the Centre for Biomedical Network Research on Rare Diseases (CIBERER), FEDER funds, the European Union, the Botín Foundation and Banco Santander through Santander Universities, among others. 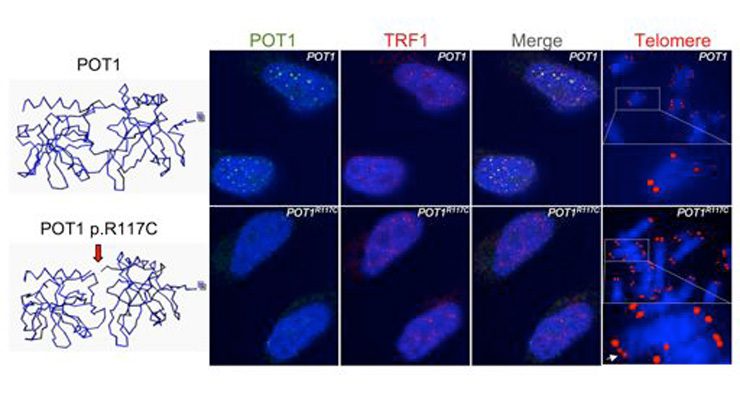 The replacement of the amino acid arginine by a cysteine at position 117 in POT1p.R117C produces conformational changes in the protein that are incompatible with an efficient connection to the telomere, inducing an aberrant telomere elongation and fragile telomeres in the mutated cells. /CNIO 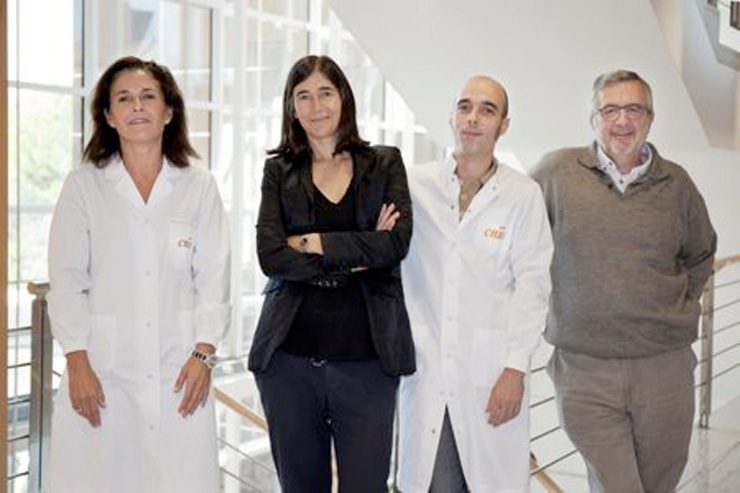