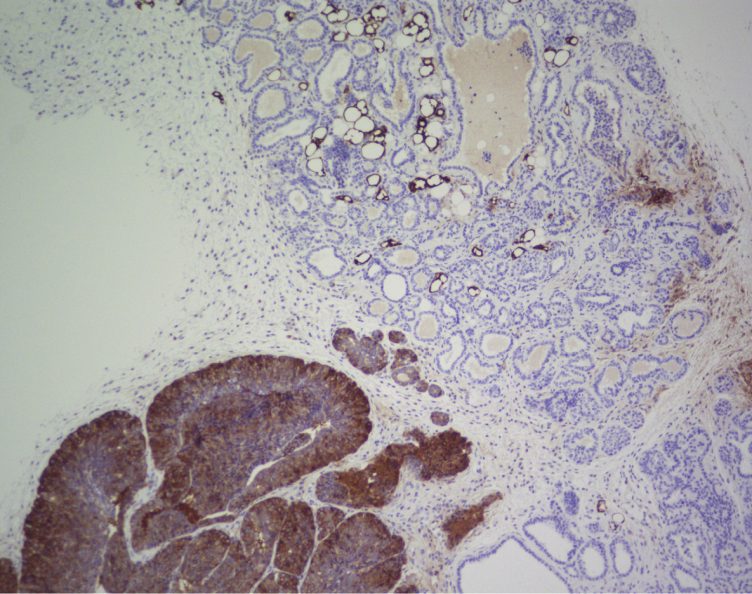 The CNIO team found that the enzyme FASN, overexpressed in many types of cancer, is crucial for one of the essential processes to occur by which a normal cell becomes cancerous

The body’s process for manufacturing fatty acids is regulated by the enzyme FASN. In normal cells, this is not a very active process – except occasionally in the liver and adipose tissue – since most of the fatty acids we need for cell maintenance are obtained from the diet. However, it is known that FASN is overexpressed in many types of cancer, such as prostate, breast, thyroid, colorectal, bladder, lung, and pancreatic cancer. Therefore, even though its relationship with the disease is still poorly understood, scientists from around the world are studying FASN as a potential target for cancer treatment. Now, a team of researchers led by Miguel Quintela-Fandino, Head of the Breast Cancer Clinical Research Unit of the Spanish National Cancer Research Centre (CNIO), has discovered the link between FASN and cancer and has shown that therapies that inhibit FASN are highly effective in early stages of cancer to prevent the development of tumours in mice and cell cultures, but not to treat tumours once they have already appeared. The results are published in Nature Communications.

One of the main findings of the study is that the importance of FASN for the development of cancer is not related to its ability to generate fatty acids. Until now, it was thought that tumour cells over-activate FASN to generate energy, build their cell membranes, etc. “In this work, however, we show that cancer continues to capture these fatty acids from circulating blood,” explains Quintela, leader of the study. “Therefore, FASN’s function of synthesising fatty acids is not necessary for cancer cells.”

Cancer does need FASN to help it arise. The researchers discovered that FASN is essential for one of the key processes – known as the hallmarks of cancer – in the transformation of a normal cell into a cancer cell: anchorage-independent growth – that is, being able to grow without being attached to a solid surface, a capacity that a normal cell does not have. “Together with other signs -such as the ability to invade and resistance to programmed cell death-, a key feature that defines that a cell is transforming into a malignant cell is that it can grow autonomously and separate itself from the tissue to which it is anchored,” explains study leader Quintela. “As soon as they separate, normal cells enter a process called anoikis and die, while tumour cells can continue growing.”

Without FASN there is no tumour

Working with a transgenic mouse model that develops an aggressive type of breast cancer, the team found that by eliminating FASN the tumours did not appear. Quintela explains why: “Anchorage-independent growth increases the amount of free radicals produced by the mitochondria, and after reaching a certain level these would suffocate the cancer cells and they would die. How do the cells avoid this? By using FASN, since FASN regulates a process called reductive carboxylation that eliminates this excess of free radicals. Therefore, when we blocked FASN in our study, free radicals accumulated in an uncontrolled manner, which prevented the growth of tumours.”

The team confirmed these results in cultures of normal mouse cells in which they overexpressed known oncogenes – such as KRAS (involved in lung cancer) or PyMT and HER2 (involved in breast cancer) – to induce the transformation of normal cells into malignant cells. By eliminating the expression of FASN, normal cells did not transform into cancer cells, even though the oncogenes were overexpressed.

Researchers around the world are studying the potential of FASN to treat certain types of cancer. However, the results of the CNIO team suggest that its effectiveness is preventive, not therapeutic. “In our mouse model, which develops a highly penetrant form of breast cancer, areas where FASN was present developed cancer, whereas tumours did not develop in areas where we blocked FASN, and survival increased by 68%,” says Quintela. “But when we tried to inhibit FASN in already established tumours, there was a small transient effect that hardly affected tumour progression.” In the following steps of the investigation, the team will try to study the implications of these findings for metastasis and the immune system’s response to tumours. In the future, the potential of these findings for application in risk populations could also be analysed.