Cell Reports. The CNIO discovers a link between a rare form of anaemia and cancer

More than 20% of people affected by Diamond-Blackfan anaemia, a rare disease, develop various types of tumours throughout their lives

The finding, published today in the journal ‘Cell Reports’, could potentially improve current treatments for this type of anaemia, which, to date, are only effective in resolving the haematological disorders

Researchers from the Tumour Suppression Group at the Spanish National Cancer Research Centre (CNIO), headed by Manuel Serrano, have discovered the molecular mechanisms that determine cancer predisposition in patients with Diamond-Blackfan anaemia (DBA). To achieve this, they have created the first animal model that recapitulates key characteristics of this type of anaemia in humans, including high cancer susceptibility. The finding, published today in the journal Cell Reports, could potentially improve current treatments for this disease, which are effective in resolving the haematological disorders but not in preventing the greater predisposition to cancer.

DBA is a rare type of anaemia that affects 5 people per million. It is characterised by blood disorders, short stature and malformations in the heart, palate and hands. Previous observational studies had reported that around 20% of these patients develop various types of cancer during their first 46 years of life; in particular, lymphomas — tumours of the blood — but also solid tumours such as colon cancer, osteosarcoma and gynaecological cancers. Other studies had developed animal models that recapitulate the characteristics of this type of anaemia, but not the predisposition to cancer.

Now, CNIO researchers have achieved this by working on the RPL11 protein. They have discovered that mice with partial deficiency of RPL11 (i.e. one of the two copies of the gene is faulty) not only suffer from the incorrect generation and maturation of red blood cells (causing anaemia), but are also predisposed to lymphomagenesis — the development of lymphomas.

INFLUENCE ON THE ‘GUARDIAN OF THE GENOME’

DBA patients display alterations in ribosomal proteins, those that belong to the ribosomes, the organelles within cells that are responsible for synthesising proteins. However, when other research groups generated animal models with mutations in some of these proteins, those animal models experienced haematological disorders that are typical of anaemia — red blood cells are not produced or do not mature properly — but cancer predisposition was not reported. CNIO researchers decided to work specifically on the ribosomal protein RPL11 to try to recapitulate this feature in their animal model, and they were successful.

Manuel Serrano, who has led the study, explains why they chose to focus on this protein: “Cells need the ribosomes to function properly in order to proliferate and grow; we knew that when something goes wrong in these organelles, RPL11 operates as a switch that activates the p53 gene to stop the cells from proliferating and forming tumours; this mechanism is called ribosomal stress. P53 is one of the main tumour suppressor genes identified to date, to the extent that its relevance in preventing cancer has led to it being named the guardian of the genome. This important function made us think that the protein could play a crucial role in the cancer predisposition observed in patients with DBA: if RPL11 is mutated, it loses the ability to activate p53 to prevent tumours caused by cellular damage.”

In addition to impairing the normal function of the p53 tumour suppressor gene, mutations in RPL11 also increase the levels of the MYC oncogene, a protein that, when produced at abnormally high levels, can promote the development of tumours. “We believe that in DBA both factors combined contribute to induce the development of cancer,” says Lucía Morgado-Palacín, researcher and lead author of this paper. “One of the next steps in the research would be to confirm that this p53 malfunction and the high levels of MYC are also present in human patients suffering from this type of anaemia.”

If the results of the research are confirmed in humans, it could represent a qualitative leap in the treatment of Diamond-Blackfan anaemia. “Today, they are administered corticosteroids and given blood transfusions — which only relieve the symptoms of the anaemia by increasing the levels of red blood cells — or they undergo a bone marrow transplant, the definitive treatment. However, none of these therapies addresses the observed cancer predisposition in these patients. Our animal model will be very useful to study if any of the existing cancer therapies might be effective against this characteristic of DBA,” says Gianluca Varetti, CNIO researcher who has also participated in the study.

The study has been funded by the Ministry of Economy and Competitiveness, the European Research Council (ERC), the Community of Madrid, the Botín Foundation and Banco Santander, through Santander Universities, the Ramón Areces Foundation and the AXA Foundation. 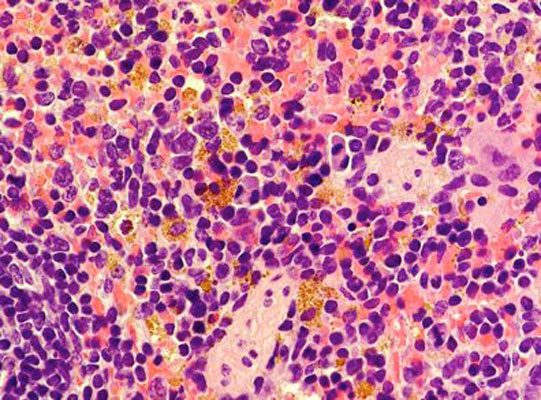 Histological section of the liver from mice deficient in RPL11. The gold aggregates correspond to haemosiderin, which in turn evidences the anaemia of these mice. /CNIO