Nature. A gene that increases the risk of pancreatic cancer controls inflammation in normal tissue

Inflammation is a defensive response of the body to aggression, but when it persists it can be harmful and can even predispose the subject to cancer. Hence, it is crucial to understand fully the relationship between inflammation and cancer. A group of researchers at the Spanish National Cancer Research Centre (CNIO) has now discovered an unexpected link between the two processes: in the pancreas, one of the genes that increases the risk of developing pancreatic cancer also controls inflammation. This finding offers “a major conceptual change”, explains Paco Real, Head of the Epithelial Carcinogenesis Group at the CNIO, which, as well as helping to understand the origin of tumours, suggests new strategies to improve the prevention of pancreatic cancer. 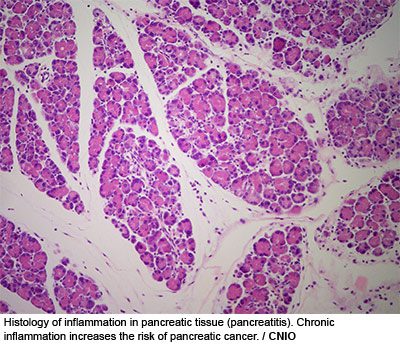 The research is published on the 14th of February in Nature magazine, which also comments on the findings in its News & Views section. The change in paradigm brought about by this result is related with the concept of inflammation itself. Inflammation is generally considered a defensive response organised by the cell starting from zero when there is an external aggression, but CNIO researchers see it now as “a defensive mechanism that the cell keeps suppressed, unless it is required”, Real states. The new findings show the specific control mechanisms that suppress inflammation in normal pancreas. Starting with this conceptual change, the CNIO group has also discovered that, at least in the pancreas, molecular mechanisms involved in the normal functions of healthy tissue, such as cellular differentiation, also suppress inflammation. In other words, the normal functioning of the cell involves keeping inflammation under lock and key. These results help understand previous findings by the same researchers showing that, in mice without the mechanism that inhibits inflammation, the pancreas is prone to develop a cancer induced by mutations in the KRAS gene –a key gene in pancreatic cancer–. “We see that when cells are not correctly differentiated, a state of pre-inflammation occurs, and we know that in this context, cells are more sensitive to mutations in the KRAS; it’s as if the cells move to the starting grid, ready for inflammation and cancer”, explains Real. The mechanism that controls inflammation is a gene called NR5A2. Researchers have studied its function in depth in mice and have verified that the results can be extrapolated to humans. As Real explains, “in mice, when there are normal levels of NR5A2, inflammatory phenomena are suppressed, whereas when levels of NR5A2 fall, inflammatory programmes are activated and the risk of developing pancreatic cancer increases; in humans, individuals with low levels of this same gene in the pancreas display a very similar state of pre-inflammation to that detected in mice”. It is no coincidence that NR5A2 is the switch that turns inflammation on, given that in humans, variants in this gene have been identified that increase the risk of pancreatic cancer. These variants are frequently found in the population: having these variants is not sufficient to cause pancreatic cancer, but we now know that they are associated with a trigger of the initial stages of inflammation and an increased risk if they also occur alongside other circumstances, such as KRAS mutations. This fits in very well with clinical observations: pancreatic cancer frequently occurs in patients with a genetic predisposition, mutations in the KRAS gene, and in those with pancreatitis, inflammation of the pancreas. Now researchers are faced with two new strategies to make further progress. One is to determine whether the existence of a genetic link between inflammation and cancer is also found in other organs; the other is to try and apply the new knowledge to the prevention of pancreatic cancer, which currently has one of the worst prognoses, partly due to its late diagnosis. The researchers think that detecting initial states of inflammation would also provide useful ‘warning signs’. But for this, they need to be able to detect those signs using a simple blood test: “The pancreas cannot be biopsied, as other more easily accessible tissues can. We are going to try and detect this pre-inflammatory state in the blood, first in mice and then in humans”, says Real. Paco Real leads also a group at the the CIBERONC, the Centro de Investigación Biomédica en Red de Cáncer. In this paper have also participated the Genes, Development, and Disease Group, the Genetic and Molecular Epidemiology Group and the Confocal Unit at the CNIO. This research has been funded by the Spanish Ministry of Economy, Industry and Competitiveness, the Instituto de Salud Carlos III, European Union Seventh Framework Programme, Worldwide Cancer Research (WCR), the Fondo de Investigaciones Sanitarias (FIS), EUPancreas COST Action, the Intramural Research Program of the U.S. National Institutes of Health (NIH),  the National Cancer Institute, the European Science Foundation (ESF), Fundación Juegaterapia and the Spanish Association Against Cancer (AECC).