Cancer Cell. A CNIO team discovers that a derivative of vitamin B3 prevents liver cancer in mice.
Study published today in the journal ‘Cancer Cell’

Dietary supplements of nicotinamide riboside, a derivative of vitamin B3, prevent the development of liver tumours and induce tumour regression in mice

Liver cancer is one of the most frequent cancers in the world, and with the worst prognosis. According to the World Health Organisation (WHO), in 2012, 745,000 deaths were registered worldwide due to this cause, a figure only surpassed by lung cancer. The most aggressive and frequent form of liver cancer is hepato- cellular carcinoma (HCC); little is known about it and there are relatively few treatment options.

Researchers from the Spanish National Cancer Research Centre (CNIO), have produced the first mouse model that faithfully reproduces the steps of human HCC development, from the appearance of the first lesions in the liver to the development of metastasis. The results, published today in the prestigious journal Cancer Cell, indicate that diets rich in nicotinamide riboside, a derivative of vitamin B3, protect these mice from developing HCC in its most initial stage, when genotoxic stress is damaging cellular DNA. They also show a curative effect of the diet in those mice that had previously developed the disease.

One obstacle to the study of human HCC is the absence of mouse models that replicate the disease, which could be used to investigate molecular pathways or new therapies. Given that human HCC is associated to alterations in hepatocytes survival, and that the URI oncogene plays a role in this process, the researchers genetically engineered mice that contained high levels of URI only in the liver, in a controlled manner over time.

At 30 weeks, the mice with high levels of URI generated sporadic tumours in the liver and even metastasis when the induction lasted longer. The study details how deficiency in nicotinamide adenine dinucleotide (NAD+), a universal compound found in living organisms that is needed to burn calories via cell metabolism, orchestrates the development of the disease.

“An increase in URI reduces cellular NAD+ and as a consequence produces genotoxic stress and DNA damage,” says Nabil Djouder, leader of the study and Head of the Growth Factors, Nutrients and Cancer Group in the BBVA Foundation–CNIO Cancer Cell Biology Programme. “It is still not totally clear, however, why the deficit in NAD+ causes these lesions,” he adds.

The appearance of DNA damage is the first link in the chain of events that activate the carcinogenic process in the liver, even before apoptosis or cell death, as has been described in the literature. “We normally say that oncogenes induce DNA damage. Now we may be able to say, more appropriately, that oncogenes induce NAD+ depletion [or deficits in NAD+] which causes DNA damage,” says Djouder.

The inverse relationship between NAD+ and cancer awakened the curiosity of the researchers: could an increase in NAD+ have beneficial effects on the disease? When the scientists supplemented the diet in genetically modified mice with nicotinamide riboside, a derivative of vitamin B3 that increases intracellular levels of NAD+, they did not observe tumour development. Surprisingly, when they gave this diet to mice that had already developed the disease, the size of the tumours was reduced and they eventually disappeared.

The results have been reproduced in other types of cancer such as pancreatic cancer. “We observed the same results in mice with pancreatic adenocarcinoma with regards to DNA damage, so we could conclude that this treatment is effective on tumours caused by oncogene-induced DNA damage and thus, deficit in NAD+,” says Krishna Tummala, first author of the study.

In addition to working with the mouse model, the authors have collated the results of nearly a hundred human samples. “Those from patients with HCC contain URI levels that double those of healthy samples,” according to the article. The data, which also associates URI with a worse prognosis or evolution of the illness, suggests that the gene could be a possible new HCC marker, and nicotinamide riboside boosting NAD+ levels may have a human relevance.

Several epidemiological studies coincide in associating diets low in tryptophan –a NAD+ precursor– with an increased incidence of certain types of cancer. It has also been observed that daily supplements of vitamin B3 in populations with chronic nutritional deficiencies, reduces the incidence of some cancers including oesophageal cancer.

Despite the results, the researchers underline that the efficiency of NAD+ enhancing nutritional supplements to protect healthy cells from chemotoxic stress as a combined therapy in oncology still needs to be demonstrated. Djouder’s team is collaborating with the CNIO Clinical Research Programme, lead by the oncologist Manuel Hidalgo, to broaden these studies in mice and evaluate the possibility of carrying out clinical trials in humans in the future.

This work is the result of a multidisciplinary collaboration between the Bioinformatics and Proteomics CNIO Units, the Royal London Hospital and the University College London NHS Trust in UK. It has received funding from ‘La Caixa’, the Ministry of Economy and Competitiveness, Worldwide Cancer Research, and the European Foundation for the Study of Diabetes (EFSD). 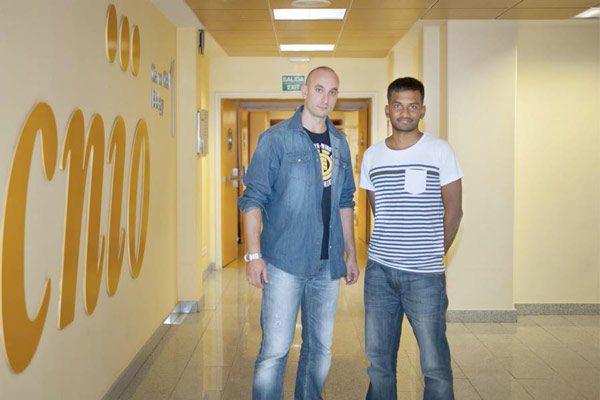