Developmental Cell. A connection between senescence and stem cells caused by a breast cancer-initiating protein 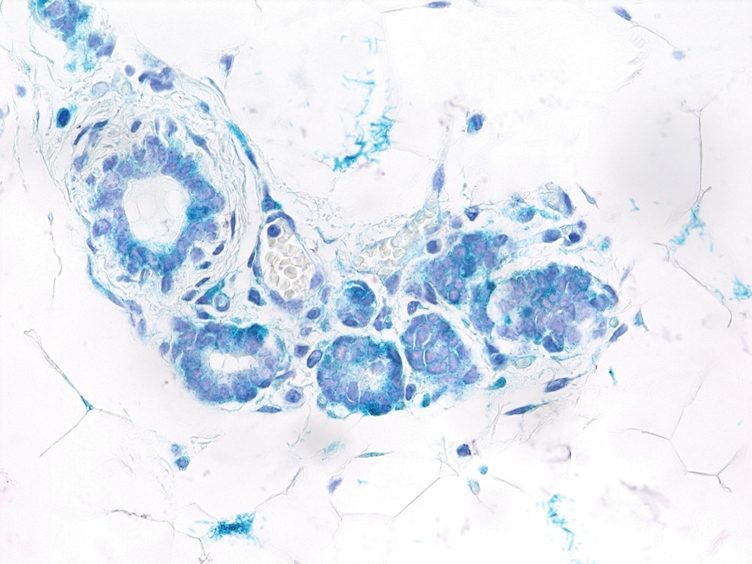 High levels of RANK protein, a breast cancer initiator, trigger senescence, which plays a protective role in the early stages of tumours and delays their onset

In more advanced stages of the disease, RANK-induced senescence becomes a double-edged sword and promotes an increase in tumour progression and aggressiveness

Early diagnosis and improvement of breast cancer treatments have reduced breast cancer mortality in recent years, with survival rates reaching 85% today. In spite of these data, breast cancer was still the most frequently diagnosed tumour in the world in 2020, mainly due to increased population screening and social factors such as ageing. RANK protein plays a key role in the development of these tumours. Located in the membrane of cells, when it binds to its partner RANKL, it sends signals that stimulate the development of the mammary gland. When these proteins do not work properly, breast cells begin to divide and multiply uncontrollably, resulting in breast cancer.

Researchers from the Spanish National Cancer Research Centre (CNIO) and the Bellvitge Biomedical Research Institute (IDIBELL), led by Eva González-Suárez, Head of the Transformation and Metastasis Group at the CNIO, have found that the hyperactivation of the RANK pathway plays a double function in breast cells: in the early stages of cancer, it activates senescence, which has a protective effect and delays the appearance of tumours; in more advanced stages, RANK-induced senescence favours the accumulation of stem cells in the breast tissue, which promotes tumour growth and increased aggressiveness. The results of the work are published this week in the journal Developmental Cell.

The authors describe throughout the paper how this double activation of senescence and tumour stem cells occurs in response to high RANK levels, using mice that produced large amounts of this protein in the epithelial cells of breast tissue. “We observe that high levels of RANK protein induce senescence and at the same time an accumulation of stem cells, which in principle seems contradictory, but is not,” explains González-Suárez.

RANK proteins have been linked to bone tissue remodelling, and blocking these proteins by means of inhibitors such as denosumab antibodies has been shown to be effective in the treatment of bone-related pathologies such as osteoporosis and bone metastases.

These proteins also participate in the development of the mammary gland, which occurs mainly in women during puberty, pregnancy and the menstrual cycle in response to sex hormones. When these proteins do not work properly, breast cells begin to divide and multiply uncontrollably. “In this paper, we have detected abnormally high levels of RANK in pre-neoplastic lesions in patients with breast cancer,” the researchers report. How does RANK act on epithelial cells in the mammary glands to promote cancer?

In 2010, González-Suárez first described the key role of this protein in the development of breast cancer and proposed that drug inhibition by means of RANKL inhibitors could prevent breast cancer. Over the course of a few years, “we demonstrated its therapeutic potential for the treatment of breast tumours by reducing recurrence and metastases, both because of its role in tumour cells and because of a reactivation of the anti-tumour immune response,” the researcher said.

A protective mechanism that becomes harmful

Senescence is a process historically associated with the protection of cells and tissues. Cells begin their senescence programme in response to stimuli such as the activation of oncogenes – cancer-promoting genes –, the absence or failure of anticancer genes, or the shortening of telomeres – the protein structures that protect the ends of chromosomes. All of these stimuli are harmful, and senescence causes cells to enter a state of lethargy to facilitate cell integrity.  But today it is known that, in addition to the protective role of senescence against the development of diseases such as cancer, it can be a double-edged sword and favour pathological processes; for example, in obesity and diabetes, it promotes the disease, increasing insulin resistance and inflammation.

In the paper published in Developmental Cell, the researchers have found that, in the early stages of breast cancer, high levels of RANK protein in the breast epithelium in mice induce senescence and a delay in tumour development. In contrast, in more advanced stages of tumours, they observed that senescence favoured the accumulation of stem cells in the breast tissue, leading to increased tumour growth and aggressiveness.

“The mammary gland contains stem cells, which are like primitive cells that have the ability to differentiate into different cell types and promote tumour formation and increase their metastatic capacity,” says González-Suárez. The researcher had already seen in previous studies that RANK promotes stem cell properties in the mouse mammary epithelia. Now, the authors of the study have for the first time in breast cancer linked senescence to an increase in the stem cell properties of RANK regulated tissue, and how this leads to an increase in tumour progression and aggressiveness.

In this sequence of events in which RANK is activated, the team has observed that in the earliest stages of the disease, senescence was activated primarily in the luminal cells of the breast epithelium, those that are most exposed to the lumen of the breast ducts.

In the work they suggest that these senescent, non-tumour cells release a series of substances that act in a paracrine way – at a distance from neighbouring cells- on luminal and basal cells, the latter of which are far from the lumen of the ducts. In response to this stimulus, luminal and basal cells acquire stem cell characteristics, and despite the misleading initial delay, the resulting tumours are more aggressive, growing rapidly, causing lung metastases.

Previous studies by González-Suárez and other research groups suggest that RANK inhibitors could prevent breast cancer and improve the prognosis of patients. “Preventive clinical trials on this type of compounds are currently underway in a subgroup of BRCA1 gene mutation-bearing women, who are at high risk of developing breast tumours. The inhibition of RANKL offers a much less aggressive alternative to mastectomy. Other trials are testing the potential of RANKL inhibitors to improve survival in breast cancer, among other tumours,” explains González-Suárez

This work has been funded by the Spanish Ministry of Science and Innovation, the National Institute of Health Carlos III, the European Regional Development Fund., the European Research Council, and TV3’s Fundación La Marató.