Nature Communications. A CNIO team uses organoid technology and single-cell RNA sequencing to advance in the study of bladder cancer 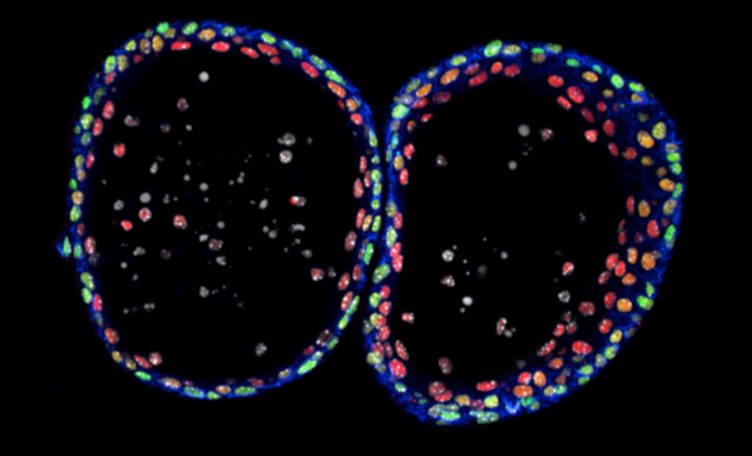 Bladder cancer research has been hampered by the inability to establish stable long-term cultures of normal urothelial cells, responsible for 90% of these tumours

The CNIO researchers used organoid technology to establish long-term cultures of normal mouse urothelial cells that maintain their identity, from which they identified a population of proliferating stem cells -important for the origin of bladder cancer- that could not be studied until now

Investigation of biological mechanisms in urothelial tissue -one of the three types of tissue that make up the urinary system- has always been very limited due to the lack of technologies that allow working with stable and long-term populations of the cells that compose it. As a consequence, the mechanisms underlying diseases such as bladder cancer -90% of these tumours originate in urothelial cells- or cystitis remain poorly understood. Now, scientists from the Epithelial Carcinogenesis Group led by Paco Real at the Spanish National Cancer Research Centre (CNIO) used innovative organoid technology to achieve stable long-term cultures of mouse urothelial cells. Subsequently, they characterised the organoids by sequencing the RNA of individual cells and identified a small population of stem cells -proliferative cells- that gives rise to the organoids and that could not be studied until now. This will allow working with this population and usher in a new era in the study of diseases of the urinary system. Researcher Catarina P. Santos is the first author of this study, which will be published in the journal Nature Communications.

Urothelial tissue is one of the three tissue types that make up the organs of the urinary system; it forms a layer that lines the bladder, kidneys, ureters and urethra. These cells are of great importance in the development of bladder cancer since their uncontrolled proliferation causes 90% of these tumours. These cells also play a role in other diseases, such as cystitis, which is very common, especially in women.

The in vitro study of these tissues has been hampered by the impossibility of achieving stable long-term cultures. “Until now, you could only keep the cells in culture for a few days or weeks, and you could hardly work with them because the cells quickly lost their personality,” explains Real. “With this new technique, we were able to keep the cells in culture for more than a year and, more importantly, the cells retain the properties of the original tissue.”

Organoid technology allows cell cultures to grow in a three-dimensional matrix called Matrigel. Its advantage over traditional cultures in Petri dishes –which are two-dimensional– is that the three-dimensional structure is more similar to the conditions in which cells grow in the body itself. This technology could boost the generation of organs for transplantation in the future.

The researchers went a step further and, thanks to single-cell RNA sequencing, were able to identify the nature of the urothelial stem cell population of these organoids that can proliferate and give rise to cancer. Until now it was not possible to expand, analyse and describe this cell population because it accounts for less than 1% of the total bladder tissue. This makes it very difficult for researchers to work with these cells and, consequently, to make progress in the study of diseases resulting from their incorrect functioning. “Now we don’t have to hope to be able to find them in human tissue anymore, but we can look for them directly because we have more information about their identity,” says Real. “We can also see how they resemble and how they differ from tumour cells because tumour cells also proliferate inappropriately and they may share some similarities. This will give us clues as to what changed in those cells that led to the formation of a tumour.”

New impetus for research into diseases and tissue regeneration

The team also showed that the acquisition of functional properties is dependent on Notch, a gene that in bladder cancer functions as a tumour suppressor: Notch activation causes cells to differentiate, which is a normal function of the cell that serves as a protection mechanism against tumour growth. “We show for the first time that this route, which, in collaboration with researcher Manuel Serrano, we had previously demonstrated to be altered in bladder cancer, plays a role in normal tissue and conditions its differentiation, and that this is probably the reason why it also plays a role in tumours,” continues Real. “When this pathway is inactivated, the cells cannot differentiate well and would be more susceptible to developing cancer.”

These findings are not only of benefit for bladder cancer research but also for other pathologies of this organ, such as cystitis. “Our work enables researchers who are investigating other pathologies to have stable cell populations in large numbers to study these diseases. In addition, our technique for expanding cell populations can be important for tissue regeneration after surgery.”

As next steps in this research, Paco Real aims to perform the same procedure on human cells, genetically manipulate them, and then induce damage to analyse their behaviour in pathological situations and unravel their repair mechanisms

This study was carried out in collaboration with the group of Alberto Muñoz at the Biomedical Research Institute and with the support of the CNIO Genomics and Confocal Microscopy Units.The study has been funded by the Spanish Ministry of Science, Innovation and Universities, the National Institute of Health Carlos III, CIBERONC and the Spanish Association Against Cancer (AECC).