Nature. A CNIO team is the first to produce embryonic stem cells in living adult organisms.
Study published in Nature is another step towards regenerative medicine

Manuel Serrano’s group manages to reproduce a technique in mice that, applied in vitro, won Shinya Yamanaka the Nobel Prize in Medicine in 2012

A team from the Spanish National Cancer Research Centre (CNIO) has become the first to make adult cells from a living organism retreat in their evolutionary development to recover the characteristics of embryonic stem cells. The results have just been published online by Nature.

Researchers have also discovered that these embryonic stem cells, obtained directly from the inside of the organism, have a broader capacity for differentiation than those obtained via in vitro culture. Specifically, they have the characteristics of totipotent cells: a primitive state never before obtained in a laboratory.

The study, carried out by CNIO, was led by Manuel Serrano, the director of the Molecular Oncology Programme and head of the Tumoural Suppression Laboratory. The study was supported by Manuel Manzanares’s team from the Spanish National Cardiovascular Research Centre (CNIC).

Embryonic stem cells are the main focus for the future of regenerative medicine. They are the only ones capable of generating any cell type from the hundreds of cell types that make up an adult organism, so they are the first step towards curing illnesses such as Alzheimer, Parkinson’s disease or diabetes. Nevertheless, this type of cell has a very short lifespan, limited to the first days of embryonic development, and they do not exist in any part of an adult organism.

One of the greatest achievements in recent biomedical research was in 2006 when Shinya Yamanaka managed to create embryonic stem cells (pluripotent stem cells, induced in vitro, or invitroiPSCs) in a laboratory from adult cells, via a cocktail of just four genes. Yamanaka’s discovery, for which he was awarded the Nobel Prize in Medicine in 2012, opened a new horizon in regenerative medicine.

CNIO researchers have taken another step forward, by achieving the same as Yamanaka, but this time within the same organism, in mice, without the need to pass through in vitro culture dishes. Generating these cells within an organism brings this technology even closer to regenerative medicine.

The first challenge for CNIO researchers was to reproduce the Yamanaka experiment in a living being. They chose a mouse as a model organism. Using genetic manipulation techniques, researchers created mice in which Yamanaka’s four genes could be activated at will. When these genes were activated, they observed that the adult cells were able to retreat in their evolutionary development to become embryonic stem cells in multiple tissues and organs.

María Abad, the lead author of the article and a researcher in Serrano’s group, said: “This change of direction in development has never been observed in nature. We have demonstrated that we can also obtain embryonic stem cells in adult organisms and not only in the laboratory”.

Manuel Serrano added that: “We can now start to think about methods for inducing regeneration locally and in a transitory manner for a particular damaged tissue”.

Stem cells obtained in mice also show totipotent characteristics never generated in a laboratory, equivalent to those present in human embryos at the 72-hour stage of development, when they are composed of just 16 cells.

In comparison with the cells obtained with the technique developed by Yamanaka, the stem cells obtained by CNIO therefore represent an even earlier embryonic state, with greater capacity for differentiation.

“This data tell us that our stem cells are much more versatile than Yamanaka’s invitroiPSCs, whose potency generates the different layers of the embryo but never tissues that sustain the development of a new embryo, like the placenta”, said the CNIO researcher.

The authors emphasise that the possible therapeutic applications of their work are still distant, but they admit that, without doubt, it might mean a change of direction for stem cell research, for regenerative medicine or for tissue engineering.

“Our stem cells also survive outside of mice, in a culture, so we can also manipulate them in a laboratory”, said Abad, adding that: “The next step is studying if these new stem cells are capable of efficiently generating different tissues such as that of the pancreas, liver or kidney”.

The study was financed by the Ministry of Economy & Competitiveness, the European Research Council, the Madrid regional government, the Botín Foundation, the AXA Foundation and the Ramón Areces Foundation. 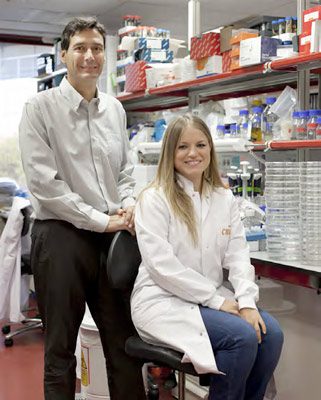