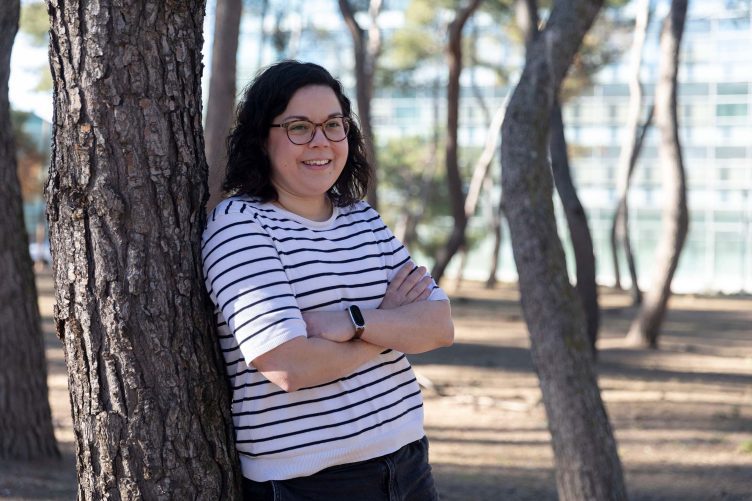 “We want to broaden the network of hospitals that might benefit from genetic counselling and to conduct studies in families with tumours for which no genetic causes have been identified so far”
About 10 percent of tumours are hereditary, but only 30 to 40 percent of the genes responsible for them have been identified
Dr Currás is a medical doctor specialising in thyroid, adrenal and neuroendocrine tumours. For the past four years, she worked at the Navarra University Clinic in Madrid

Maria Currás Freixes (Barcelona, 1983) joins the team at the Spanish National Cancer Research Centre (CNIO) as head of the Familial Cancer Clinical Unit. This Unit will work to broaden the network of hospitals that might benefit from genetic counselling and to improve genetic diagnostics in order to better identify the genes responsible for the predisposition to familial cancer.

“Being at CNIO gives you the chance to keep abreast of the state of the art of cancer research, which helps you identify new cancer genes and unravel their clinical characteristics. In addition, you have access to the CNIO platforms, which enable you to take part in Spanish and international projects,” Dr Currás remarks.

The Familial Cancer Unit provides innovative technologies to the National Health System and the scientific community, works with hospital services by offering genetic counselling to patients and their families (Familial Cancer Clinical Unit), and carries out genetic studies in families with suspected hereditary cancer syndromes (Hereditary and Familial Cancer, Hereditary Endocrine Cancer Group). The Unit also  identifies new hereditary cancer genes, which are then the focus of clinical studies aimed at helping families.

Since 2005, the Unit, working with the Fuenlabrada University Hospital, has offered genetic counselling to more than 5000 patients and their families.

The most common types of hereditary cancer include some types of breast, ovarian and colon cancers, melanoma, endocrine tumours and tumour syndromes. One of Dr Currás’ goals is to increase her Unit’s activity in order to contribute to the genetic study of some types of familial cancer, like pancreatic and stomach cancer, which have seen a rising incidence in the population.

Since April 2020, the Familial Cancer Unit has been working with the Human Genotyping Unit in the identification of markers that can be used to stratify the population and predict which individuals may be at higher risk of developing serious symptoms of Covid-19.

Maria Currás obtained her MD from the Universitat Autònoma de Barcelona in 2007 and completed her residency in Endocrinology at San Carlos Clinical Hospital in Madrid. In her final year of residency, she joined the Hereditary Endocrine Cancer Group at the CNIO, led by researcher Mercedes Robledo.

Supported by a Severo Ochoa predoctoral fellowship she completed her thesis in the same group, where she studied the genetic basis of pheochromocytoma and paraganglioma, two rare neuroendocrine tumours characterised by genetic heterogeneity and clinical unpredictability. Her research helped to establish molecular diagnostics standards for these types of neuroendocrine cancers, which have been applied not only in Spain but also internationally

After finishing her PhD, she worked in medical care in the area of endocrinology in several hospitals – Villalba, Rey Juan Carlos (Móstoles) and Navarra University Clinic (for the past four years) –, focusing on thyroid, adrenal and neuroendocrine tumours.