Maria A. Blasco, director of the CNIO, winner of the VIII Fundación E. Rodríguez Pascual Award 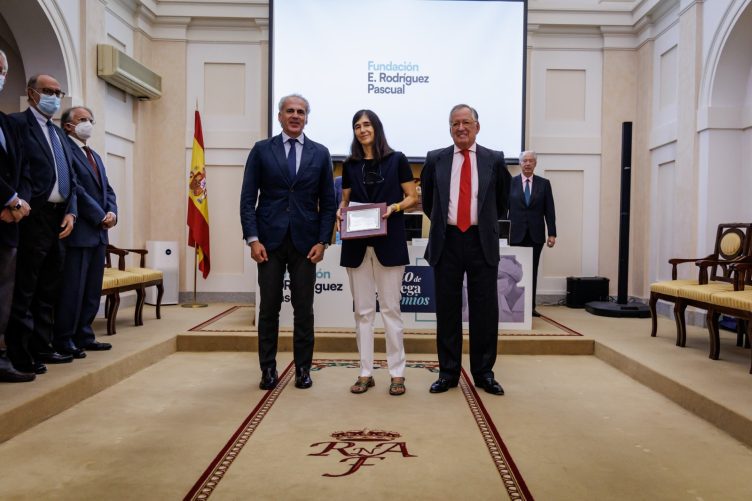 From left to right. Regional Minister of Health of the Community of Madrid, Enrique Ruiz Escudero; Maria A. Blasco and the president of the Eugenio Rodríguez Pascual Foundation, Antonio Basagoiti.

Maria Blasco has been awarded this accolade in recognition of her professional career, devoted to conducting crucial research on the importance of telomeres and telomerase in cancer, and on age-related diseases
The ceremony was brought to a close by Madrid’s Regional Minister for Health, Enrique Ruiz Escudero, who praised the work done by Blasco and said how fitting it was for her to receive this award

In recent years, Science has been taking major steps to fight cancer, with significant advances that have improved the treatment of the disease and patient quality of life. One of those responsible for these achievements is the scientific director of the National Cancer Research Centre (CNIO), María A. Blasco, a molecular biologist and scientist from Spain who specialises in studying telomeres and telomerase.

Fundación E. Rodríguez Pascual Foundation, which works to prevent the emigration of young Spanish doctors so that they develop their professional career within Spain, awarded its VIII Prize this Wednesday to Maria A. Blasco for her contribution to the scientific community. The award aims to recognise the value and merits of the work and professional activities of outstanding researchers in the field of Biomedical Sciences in Spanish-speaking countries.

Blasco, one of the world’s most influential Spanish scientists in cancer research and an important role model as a woman in research, has highlighted the role of organisations such as Fundación E. Rodríguez Pascual: “It is essential that the work of scientists is recognised and that civil society understands the value of research, because that is how we will improve the well-being of the population and overcome the global challenges we face,” she added. Blasco also expressed her gratitude at “receiving this award from an institution such as Fundación E. Rodríguez Pascual, with a long history of commitment to Science and Research, supporting scientists at all stages of the research process.” In addition, during her speech, she told the audience about her work on telomeres and telomerase. Blasco pointed out that “telomeres serve to protect DNA, and the speed at which they shorten determines our ageing, which ends up leading to disease. If we can extend the survival capacity of telomeres, we will lengthen life expectancy.”

Antonio Luis Doadrio Villarejo, president of the Royal National Academy of Pharmacy, welcomed attendees to the wonderful institution over which he presides, highlighting “the fundamental role that Maria A. Blasco plays in the field of scientific research. Blasco is following in the footsteps of her mentors, Margarita Salas and Carol Greider, who also achieved unprecedented milestones for Science.”

Madrid’s Regional Minister for Health, Enrique Ruiz Escudero, also participated in the event, presenting the award, and giving the closing speech. During his speech, Ruiz Escudero congratulated Maria Blasco “for her contribution to Science, which has allowed us to make tremendous progress in the field of Oncology”. He also thanked “all researchers in our country for all their hard work that goes into improving the lives of patients.”

Speaking behalf of Fundación E. Rodríguez Pascual, its President, Antonio Basagoiti García – Tuñón, noted that, for his foundation, “it is a tremendous source of pride to present Maria A. Blasco with the most important recognition awarded by this institution; I can think of no better person to receive this award. Her work is commendable, always striving for excellence in all of her endeavours” he stressed.

About Maria A. Blasco

Maria A. Blasco received her doctorate in 1993 at the “Severo Ochoa” Molecular Biology Centre, mentored by pioneering and eminent researcher Margarita Salas. That same year she joined the Cold Spring Harbor Laboratory in New York (USA) as a postdoctoral fellow under the direction of Nobel laureate Carol Greider. As a postdoctoral student, she isolated one of the essential telomerase genes and generated the first telomerase-deficient mouse model, which proved the importance of telomerase in telomere maintenance, chromosomal instability, and disease.

Since then, for more than 20 years, Blasco’s work has focused on demonstrating the importance of telomeres and telomerase in cancer and age-related diseases.

Created in 1970 by Don Eugenio Rodríguez Pascual, based on its founder’s vocation for research, in the field of basic sciences and clinical medicine. It aims to prevent the emigration of young Spanish doctors so that they develop their professional career in Spain.

Since its creation, the Foundation has been offering research grants in basic medical sciences and clinical science through annual calls for research teams in the field of biomedicine.