Home | News | “Immunotherapy is one of the most promising treatment options for cancer today,” says Maria A. Blasco on World Cancer Research Day

“Immunotherapy is one of the most promising treatment options for cancer today,” says Maria A. Blasco on World Cancer Research Day 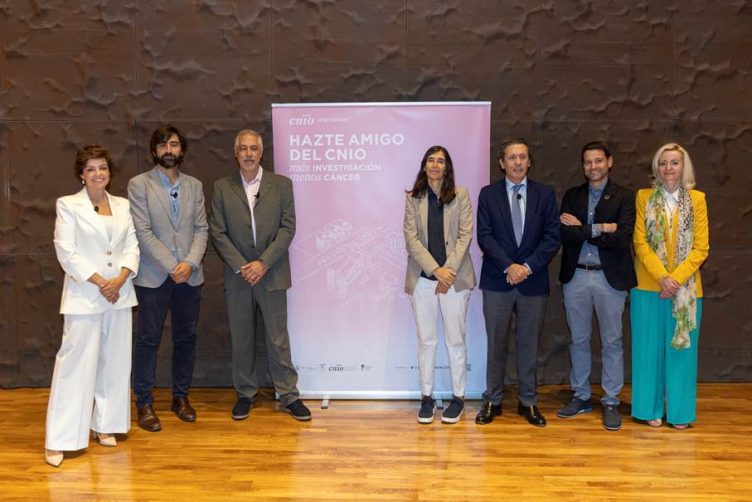 Today, the CNIO celebrated World Cancer Research Day, holding a seminar titled “Immunotherapy: Achievements and Challenges in the Latest Breakthrough in the Fight Against Cancer.” The event was attended by oncologists Luis Paz-Ares and Antonio Pérez-Martínez and by CNIO Director Maria A. Blasco, among others
Lung cancer survival rates could increase with early diagnosis programmes for heavy smokers in groups of patients at high risk, said Luis Paz-Ares, Head of the Lung Cancer Clinical Research Unit at the 12 de Octubre Hospital-CNIO: “If lung cancer is diagnosed when the tumour is 1 cm or less in size, more than 90 per cent of patients could be cured"
Childhood cancers have not been much studied, despite their being “the leading cause of death from disease among children in developed countries,” said Antonio Pérez-Martínez, Head of Childhood Blood Cancers at La Paz Hospital, who called for more energetic action in this area. Around 1100 new cases of childhood cancers are diagnosed in Spain every year

“Today’s research is tomorrow’s treatment,” said the Director of the Spanish National Cancer Research Centre (CNIO), Maria A. Blasco. “Current treatments, like immunotherapy, are the result of the research done 15 or 20 years ago.” “We need to support cancer research so that ‘cancer’ is no longer a frightening word. This will happen when all types of cancer can be cured,” she added.

Blasco took part in “Immunotherapy: Achievements and Challenges in the Latest Breakthrough in the Fight Against Cancer,” an event organised by the CNIO at CaixaForum (Madrid), with the support of La Caixa Foundation.

Held to celebrate World Cancer Research Day, the event included speeches by the Head of the Lung Cancer Clinical Research Unit at the 12 de Octubre Hospital-CNIO, Luis Paz-Ares, and the Head of Childhood Blood Cancers at La Paz Hospital in Madrid, Antonio Pérez-Martínez.

Then a panel was convened gathering Miguel Calero, Assistant Director General for Applied Services, Training and Research at the Carlos III Health Institute, and José Ruiz, Mayor of the Town of Torreperogil (Jaén), a CNIO Friends institution. The event was hosted pro bono by journalist Cristina Villanueva. Sonia Vidal, Coordinator of Medical Research at La Caixa Foundation in Madrid, referred to the strong support the CNIO gets from La Caixa Foundation.

The oncologist Luis Paz-Ares cited Nobel laureate Severo Ochoa: “If we develop relevant knowledge, someone will make good use of it.” “Immunotherapy is a case in point. Fifteen

years ago, I thought immunotherapy would never be used as a cancer treatment. Fortunately, the immune evasion mechanisms of tumours have been extensively studied and the therapies based on those studies have changed the lives of many patients.”

“Survival rates have increased by 100 per cent in 30 years,” said Paz-Ares. “The research being done today will bear fruit for patients in the future, but it will also help patients now, through clinical trials.”

Much can be done to reduce the suffering caused by cancer. According to Paz-Ares, “smoking cessation might reduce lung cancer mortality by at least 30 per cent in Spain; other factors that might help reduce cancer deaths by 50 per cent are healthy eating habits – for example, reducing red meat intake or avoiding excessive amounts of grilled meat – and physical activity.”

Paz-Ares highlighted the importance of early diagnosis: “If lung cancer is diagnosed when the tumour is 1 cm or less in size, as many as 90 per cent of patients can get cured.” He mentioned the possibility of implementing early diagnostic tests for high-risk groups that meet certain criteria, including heavy smokers. “We could diagnose more early-stage tumours and survival rates might rise by 25 per cent. We expected an early diagnostic test programme to be funded through the National Health System’s Cancer Strategy.”

Paz-Ares described the importance of getting the immune system involved in cancer treatment: “Now we know that tumours develop because mutations occur in certain genes and also because the cells that protect our body from disease are not doing their job properly. Immune cells normally prevent tumour growth in early-stage cancer, but sometimes cancer cells escape the immune system and survive. Understanding the mechanisms through which they manage to do this has helped develop novel therapies.”

“A child is continuously growing, and little is known of paediatric cancer because little has been invested in research in this area,” said Pérez-Martínez. “We should be aware of the fact that, although children tend to respond well to conventional treatments, cancer still continues to be the leading cause of child death by disease in developed countries.”

‟A strategic plan should be implemented for paediatric cancer, both at the national and the regional level. Today is World Cancer Research Day, and September is Childhood Cancer Awareness Month,” said Pérez-Martínez. Furthermore, childhood cancers are difficult to prevent, because they are not associated with habits like smoking or an unhealthy diet. Immunotherapy, however, has shown much promise in paediatric cancer.

According to Maria A. Blasco, “research should be carried out in absolutely every aspect of life. Ultimately, cancer cells are living cells that are in contact with our body, and understanding life at the molecular level is what will provide new ways not only of fighting cancer but also of preventing it and detecting it early.” The CNIO Director insisted on the importance of “basic research, because it is the seed out of which the ideas for novel therapies emerge. Immunotherapy is a fine example of this.”

Miguel Calero, Assistant Director General for Applied Services, Training and Research at the Carlos III Health Institute, remarked, “As much as 192 million euro have gone into biomedical research projects over the past years, and the Carlos III Health Institute spent 240 million euro in the past decade in this area.” However, “more support is necessary and people should know that biomedical research is not a cost, but an investment,” he added.

José Ruiz, Mayor of Torreperogil, explained the reason why his town is a member of CNIO Friends: “Cancer affects us all. We have all experienced its most unpleasant side, but there is also the brighter side of cancer cure, which depends crucially on research.”

The Town of Torreperogil is interested in establishing a network of CNIO Friends towns, José Ruiz announced today. He estimated that “if all 8000 Spanish municipalities gave 1000 euro a year for cancer research projects –a negligible amount of money in any town’s budget–, we could raise millions to fight cancer.”

Cancer death rates in Spain have shown an accelerated decline over the past decades. According to the latest report by the Spanish Society of Medical Oncology (SEOM), this trend is the result of prevention, early diagnosis, improved treatments and declining smoking rates among men.

However, cancer continues to be one of the leading causes of morbidity and mortality not only in Spain but also worldwide. In fact, cancer incidence is rising due to longer life expectancy; exposure to risk factors like tobacco, alcohol, pollution, obesity, sedentary or inactive lifestyles, etc.; and a rise in the early detection of colorectal, breast, cervical and prostate cancer, among others.

In 2022, there will be an estimated 280,101 new cancer cases in Spain: 160,066 men and 120,035 women, according to Las cifras del cáncer en España 2022 (Cancer Facts and Figures in Spain 2022). The most common types will be colon, rectal, breast, prostate and lung cancers. Only with prevention and research, which go hand in hand, will these figures drop dramatically in the coming years and decades.