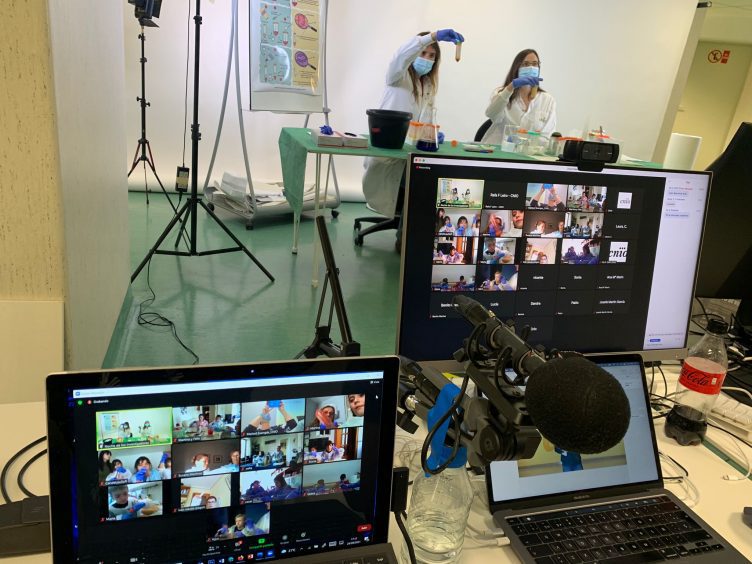 To celebrate European Researchers’ Night, more than 300 people, mostly children and youths, received a science kit at home to become researchers for a day under the guidance of CNIO scientists

During a virtual meeting entitled ‘Meet the scientists, be a scientist’,the Spanish National Cancer Research Centre (CNIO) celebrated last Friday European Researchers’ Night. This is a very important science outreach event for the centre, in which it participated for the ninth consecutive year.

Between 5 p.m. and 11 p.m., four groups of people participated in a live science experiment with young volunteer researchers from the centre, who guided them step by step through the process of carrying out a science experiment at home using everyday household products. The scientists also explained what a researcher’s work consists of and answered questions and doubts.  Altogether, more than 300 people signed up for the day, a new success in terms of participation.

To be able to carry out the experiment, in which they learned how to extract DNA from a tomato, the registered participants received a ‘scientist’s kit’ with all the necessary materials at home.

The activity aims to inspire a scientific vocation in very young people, to break down stereotypes associated with people involved in research, and to show what CNIO cancer research is all about.

The European Researchers’ Night is an initiative of the European Union, held simultaneously in 350 European cities to disseminate the importance of scientific knowledge. In Madrid, it is promoted by the Regional Ministry of Science, Universities and Innovation and coordinated by the Madri+d Knowledge Foundation. The Project is funded by the European Union’s Horizon 2020 Research and Innovation Programme under the Marie Sklodowska-Curie actions.

The event is part of the CNIO’s outreach strategy through the Dean’s Office, coordinated by researcher and head of the Centre’s Melanoma Group Marisol Soengas, in conjunction with the CNIO Training Programme. The event was coordinated by Rafael Fernández-Leiro, head of the Genome Integrity and Structural Biology Group.

Other CNIO initiatives to bring science closer to society include CNIO Arte, a project that brings together scientists and artists to create new works of art inspired by scientific research, and CNIO Friends, a philanthropic platform through which any person, company or association can collaborate with the Centre’s cancer research, and through which a competitive ‘CNIO Friends’ International Contract Programme has been launched to attract research talent.