Home | News | For the CNIO Art programme, sculptor Susana Solano has created a piece inspired by the fight against malaria with the support of epidemiologist Pedro Alonso

For the CNIO Art programme, sculptor Susana Solano has created a piece inspired by the fight against malaria with the support of epidemiologist Pedro Alonso 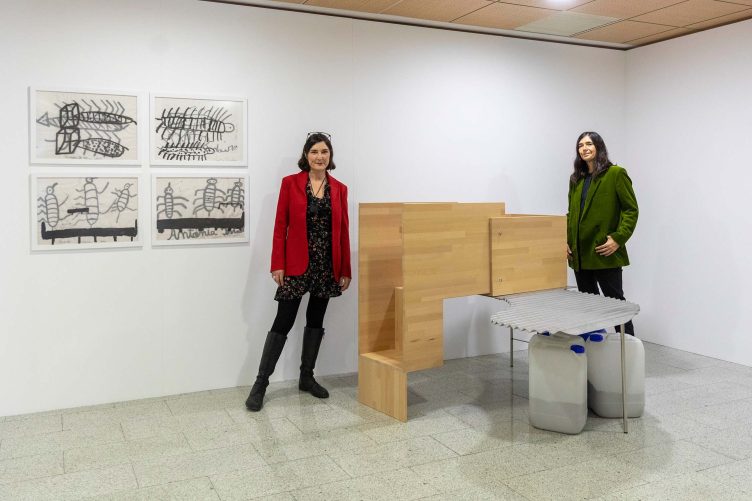 The world of things, featured in the fifth edition of this programme, was created through conversations between artist Susana Solano and scientist Pedro Alonso, director of the World Health Organization's (WHO) Global Malaria Programme
This sculpture will be exhibited at the ARCO Contemporary Art Fair along with the works from the different editions of CNIO Art. This is the second year that CNIO has had its own stand at Spain’s leading contemporary art fair
This is the fifth edition of this initiative promoted by CNIO and Fundación Banco Santander that looks for synergies between art and science
Proceeds from the sale of works from the CNIO Art collection will be used entirely to fund CNIO research, through the "Friends of the CNIO” philanthropic initiative
At the same time, the III “Art and Science” Symposium was held today at CNIO, at which artists and scientists reflected on the influence of major pandemics on artistic manifestations throughout history

In a world fatigued by the fight against a new pathogen, this year, CNIO Art looks at another disease that has been hampering the development of whole countries for centuries. In 2020 alone, there were 241 million cases of malaria. At this fifth edition of CNIO Art, the initiative launched by CNIO and Fundación Banco Santander to promote dialogue between art and science, sculptor Susana Solano travelled to Mozambique to visit the research centre founded by the epidemiologist Pedro Alonso. On her return, she created the piece entitled The world of things.

Today she presented her work in Madrid, in the Margarita Salas Auditorium of the Spanish National Centre for Cancer Research (CNIO), accompanied by Amparo Garrido, visual artist and curator of CNIO Art. “When I proposed this project to Susana Solano, she thought about it very carefully,” Garrido explained. “One of her conditions was to travel to Mozambique; making a sculpture and signing it would have been too simple. Susana is a great traveller, she wanted to share things with people there, the world of things,” said the curator, who accompanied the artist on her trip.

The CNIO Art project encourages art and science to inspire one another by putting artists and scientists in contact with each other. It has been run by CNIO for five annual editions now, in collaboration with Fundación Banco Santander. Solano‘s scientific partner Alonso is now the director of the World Health Organization’s (WHO) Global Malaria Programme. The centre he founded 25 years ago in Manhiça, Mozambique, conducts research into malaria and other tropical diseases, trains Mozambican scientists, and provides health care.

This fifth edition was presented at an event that took place at the headquarters of CNIO in Madrid, with CNIO’s director, Maria A. Blasco, the curator of CNIO Art, Amparo Garrido, and the director of Fundación Banco Santander, Borja Baselga.  Artist Susana Solano also spoke via videoconference. The event was moderated by critic and writer Luis Francisco Pérez.

The coincidences of ‘The world of things’

The world of things is on display to members of the public at CNIO as of today. As the artist David Bestue explains in the CNIO Art 22 catalogue, this work is “a sculpture that contains several allusions to the African continent, not in a direct way, but through the filtering of its memory”.

The piece was already conceptually defined before the artist’s trip to Mozambique – a necessary experience, Solano said, to come directly into contact with the problem of malaria and extend “an umbilical cord” between the work and the African country. But, to the artist’s surprise, when she got there she found herself in a school playground with a structure very similar to The world of things. “Sometimes these coincidences strengthen intuitions and grant a place, a territory, to elements that have emerged from thought,” writes Bestué.

At CNIO, alongside the sculpture, several drawings are also being exhibited, drawn by girls from the Centro de Acolhimento Menino Jesus orphanage in Manhiça, Mozambique, whom Susana Solano encouraged to reflect their experiences with malaria: mosquito nets over beds, the buzzing of mosquitoes… Solano has not manipulated these works in any way. The girls who drew these pictures are featured in the travel video made by Amparo Garrido as a kind of visual essay, which is now posted on the CNIO website.

Maria A. Blasco, director of CNIO, highlighted the importance of bringing art and science closer together, two worlds that “multiply their power when they meet,” she said.

Globality in art and science

For Blasco, science and art share a spirit of globality: “Ideas and discoveries are transmitted regardless of borders, just as artistic movements traverse the history of humanity, promoting social and cultural changes, changes in the way reality is experienced. Scientists and artists bring in fresh air, breadth of vision, new horizons”.

In the words of Blasco, “Alonso reminds us, based on his experience at WHO, of the need to think and act globally, defending equality in vaccine distribution not as a charitable act but because it benefits us all. The art of Susana Solano also brings to our reality the images and textures of other cultures, in Africa and Asia. Contemplating her works is a way to accompany her on her many journeys”.

For her part, Amparo Garrido also emphasised that “the common attribute shared by both scientists and artists alike is that they are people with great passions. They struggle between the rational and the intuitive, because science also works with intuition a great deal.” The president of Fundación Banco Santander, Borja Baselga, highlighted the importance of collaborating with important entities such as CNIO to make  projects like CNIO Art possible. He also emphasised  the importance of supporting young researchers, both those working in Spain through the funds raised by the sale of these works of art, for example, as well as Spanish professionals working in other countries, such as the United Kingdom, whom Fundación Banco Santander also supports through awards. An example of the interest shown by Fundación Banco Santander is that this foundation already owns various works by Susana Solano.

The presentation of the fifth edition of CNIO Art took place as part of the III “Art and Science” Symposium, at which artists and scientists reflected on the influence of major pandemics on artistic manifestations throughout history. This event included the participation of art historian and critic Carlos Jiménez; coronavirus expert virologist Luis Enjuanes, from the National Centre for Biotechnology (CNB); writer and journalist Ruth Toledano; and artist Ana Matey.