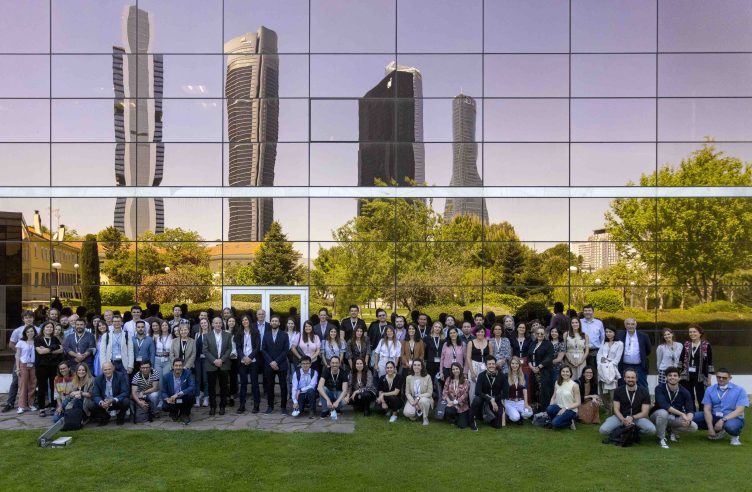 Two weeks ago at the National Cancer Research Centre (CNIO), the CNIO-CaixaResearch Frontiers Meeting presented the latest research on the molecular keys to ageing
This conference brought together a total of 88 experts, and 22 papers were presented on various specialist subjects related to ageing and its associated diseases

The possibility of living a longer and healthier life is one of the great challenges facing medicine today. But understanding these processes is complex, encompassing multiple areas of biology. For this reason, scientists from around the world gathered on 9 and 10 May at the National Cancer Research Centre (CNIO) to discuss the latest research findings and share their ideas at this conference organised by the scientists Maria A. Blasco, director of CNIO and head of its Telomeres and Telomerase Group; Alejo Efeyan, head of the CNIO Cell Metabolism and Signalling Group, and Thomas Rando, researcher at the University of California, in L.A. (USA).

“The purpose of these meetings is to bring together experts who, although they are all working in the field of ageing, are carrying out research at different biological levels, thus generating interaction between different disciplines, working models, and methodologies,” says Alejo Efeyan. Therefore, the congress included experts on ageing at molecular and cellular levels, as well as in terms of the whole organism. “This allows us to gain a global understanding of the ageing process and create synergies between research groups,” he adds.  “Ageing is the origin of most of the diseases that kill us. Only by understanding why we age will we be able to prevent and cure these diseases, against many of which there are still no effective treatments,” says Maria A. Blasco.

The CNIO-CaixaResearch Frontiers Meetings have been organised since 2010, and this is the first to be held since 2019, following the interval caused by the COVID-19 pandemic. This is the second meeting related to ageing. The three organisers are all leading researchers in the field of ageing and also presented their work at this international event, with sessions grouped into 3 major themes: Senescence and regeneration, nutrients and metabolism, and Epigenetics and genomic stability.

Maria A. Blasco presented the results of her group’s research on telomeres and the relationship between their shortening and the appearance of pulmonary fibrosis, as well as the use of telomerase as a possible therapy for this disease in humans, known as telomerase gene therapy. At the end of 2020, Blasco promoted the creation of a spin-off company, Telomere Therapeutics, founded by CNIO and UAB with an investment from Invivo Ventures and the CDTI (Spanish Investment Agency for Innovation). This enterprise will focus on turning discoveries into treatments for diseases such as pulmonary fibrosis and renal fibrosis.

Among the speakers was also Pura Muñoz, a researcher at the National Centre for Cardiovascular Research (CNIC) and the Universidad Pompeu Fabra in Barcelona, an expert in muscle tissue regeneration and recipient of the National Research Prize in Biology in 2021, who presented her work on senescent cells of muscle tissue. “Senescent cells produce a microenvironment of inflammation similar to that of ageing, which makes regeneration difficult. Understanding this process properly could allow us to identify drugs that favour muscle regeneration following injury,” she explained.

The mechanisms by which some mammals live for 200 years

Some of the researchers who presented their work at the congress are seeking to understand the mechanisms whereby some animal species live for just a few months whereas others can reach 200 years of age. “By understanding the mechanisms that lead some mammalian species to live longer and escape disease, we can develop drugs that allow humans to live longer healthier lives,” explains Vera Gorbunova, from the University of Rochester (New York, USA), an expert in the study of mechanisms that promote longevity in different rodent species or the Greenland whale, among others. “These animals live for many years and are resistant to disease. They do not develop cancer, for example,” she explained.

Multiple factors are involved in the ageing process, such as parabiosis, in which the scientist Thomas Rando is a renowned expert and about which he spoke in his paper, focusing mainly on how the blood of young individuals regenerates the tissues of old individuals. Jan H.J. Hoeijmakers, from the Erasmus Medical Center in Rotterdam, who is an expert in DNA repair and its effects on ageing and associated diseases, presented his work on these mechanisms in the development of neurodegenerative diseases. Hoeijmakerspioneered the application of fasting or calorie restriction to delay ageing and its associated diseases. Understanding the molecular keys to the relationship between nutrition, cell metabolism, and ageing is the line of work pursued by other speakers, including Alejo Efeyan (CNIO) himself, Brendan Manning and William B. Mair, both researchers at Harvard University (USA).

The National Cancer Research Centre (CNIO) is a Spanish institution dedicated to the research, diagnosis, and treatment of cancer, directed by the scientist Maria A Blasco. CNIO has obtained, for the third time in a row, accreditation as a Severo Ochoa Centre of Excellence. It is ranked seventh among the world’s best cancer research centres (according to the Scimago report; Nature Index) and has been named Europe’s leading cancer research centre.