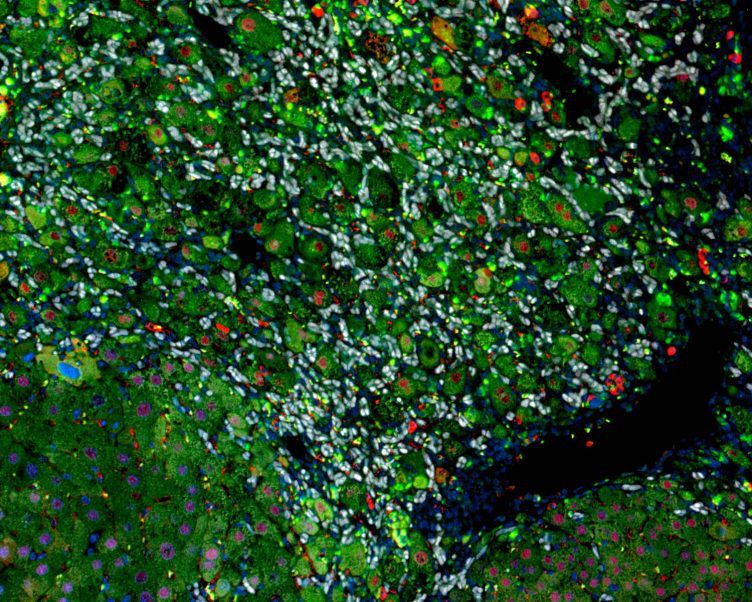 Image of a cirrhotic mouse liver in which fluorescent dyes have been used to stain different types of liver cells white, green or red. /Nabil Djouder. CNIO

The breakthrough was achieved thanks to the development of the first animal model - a genetically modified mouse - with liver cirrhosis similar to that observed in humans
Liver cirrhosis is a severe disease that can progress to liver cancer. Identifying the mechanisms leading to the disease will enable the search for new pharmacological strategies, the researchers say
The study by the CNIO’s Growth Factors, Nutrients and Cancer group has been published in the Journal of Hepatology

Liver cirrhosis is a deadly disease that is still poorly understood, in large part due to the lack of animal models that allow it to be studied. The CNIO group led by Nabil Djouder has created the first genetically modified mouse that develops liver cirrhosis comparable to human cirrhosis and has thus managed to identify the molecular mechanisms underlying this disease. “Determining the molecular mechanisms causing cirrhosis will help us to understand how it progresses to liver cancer,” Djouder says.

The paper is published in the Journal of Hepatology, a high-impact journal in the field.

In cirrhosis, the liver becomes stiff and fibrotic, like scar tissue. This is caused by the activation of a type of cell called fibroblast. The new study explains how these cells are involved: when the liver’s predominant cells, hepatocytes, fail to produce a protein called MCRS1, bile acids – products of the liver and components of bile – accumulate in the liver and activate fibroblasts, which eventually cause fibrosis.

The first animal model that recapitulates human liver cirrhosis was obtained serendipitously. The CNIO’s Growth Factors, Nutrients and Cancer Group has been studying the protein MCRS1 for almost a decade. Few years ago, they discovered that it was linked to metabolism and several types of cancer. Since the liver is the most important organ involved in metabolism, they also wanted to analyse the role of MCRS1 in the liver cells, the hepatocytes

Researchers Amanda Garrido and Eunjeong Kim, co-first authors of the paper now published, created a genetically modified mouse in such a way that its hepatocytes did not express MCRS1 and observed that it developed changes equivalent to human liver cirrhosis.

“It was a surprise,” says Djouder, “which opened an opportunity to study the molecular mechanisms of cirrhosis and its progression to liver cancer, and thus try to reverse the disease,” he adds.

A new avenue in the search for treatments

“Without any question, understanding why the lack of MCRS1 in hepatocytes causes cirrhosis has unveiled a previously unknown process at the origin of the disease, which opens the door to the development of new pharmacological strategies,” says Garrido.

Until now, it was known that liver fibrosis involves the transformation of a type of cell, the hepatic stellate cells, into fibroblasts, which synthesise the substances that form scar tissue or fibrosis. However, the mechanisms that trigger this transformation and the consequent activation of fibroblasts were unknown.

The absence of MCRS1 in hepatocytes alters the flow of bile acids, which activate a molecular receptor, namely FXR, in fibroblasts that acts as the switch that sets the process of cirrhosis in motion. “These events are central and universal in the development of liver cirrhosis”, says Djouder. “Targeting this pathway will have important ramifications for the treatment of cirrhosis.”

In addition, these data reveal a previously unknown role for MCRS1 in regulating gene expression in hepatocytes and maintaining normal liver function.

A drug in trial against several liver diseases

It is precisely the FXR receptor that is targeted by a drug that is currently being tested in the US for several liver diseases, the semi-synthetic bile acid Ocaliva. However, recent clinical data have alerted the US drug agency, the FDA, to the potential adverse effects of Ocaliva. Its use caused severe fibrosis and fulminant liver damage in some patients, data that are in agreement with Djouder’s research published in the Journal of Hepatology.

“More research is needed to ensure that patients can be safely and effectively treated with Ocaliva,” the authors conclude in the Journal of Hepatology. “Our data indicate that bile acids are important in the activation of fibrosis, and this is an important paradigm shift with a major impact on future therapeutic strategies.”

This work was funded by the Spanish Ministry of Science and Innovation, the Institute of Health Carlos III, the National Research Foundation of the Ministry of Education of Korea, the European Foundation for the Study of Diabetes, the European Regional Development Fund, the Autonomous Community of Madrid, the Spanish Association Against Cancer and the CNIO Friends philanthropy programme.