Cell Reports. CNIO researchers find a method to select for mammalian cells with half the number of chromosomes 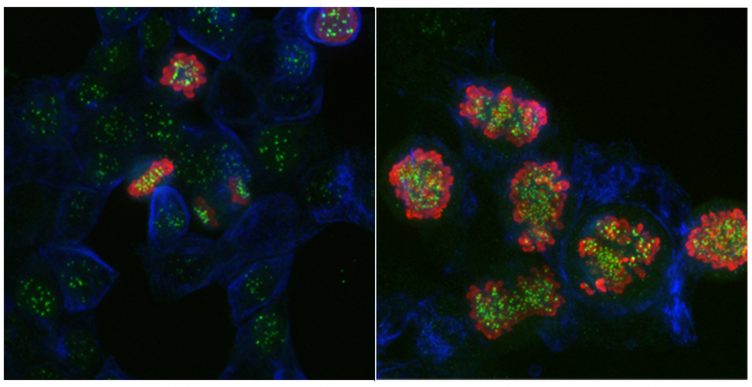 Through chemical screening of over 1,000 compounds, researchers at CNIO identified a number of molecules – including a precursor in the synthesis of Taxol – for efficiently isolating mammalian cells with a single set of chromosomes

This innovative method might facilitate genetic research in complex organisms like mammals, humans included, in a fast, efficient way

“Our results might help identify cancer patients who are most likely to benefit from an antincancer treatment with taxanes” says Óscar Fernández-Capetillo, leader of the study

Since the emergence of molecular genetics more than fifty years ago, scientists have tried to isolate haploid mammalian cells, that is, cells with half the number of chromosomes contained in somatic cells. Haploid cells are a powerful genetic tool to analyse gene function. In the past decade, a number of researchers finally succeeded in developing haploid cell line cultures. However, these cell lines are unstable and have a tendency for diploidisation. Now, researchers at the Spanish National Cancer Research Centre (CNIO) have identified chemical compounds that increase the stability of mammalian haploid cell lines. The study is published in the latest issue of Cell Reports.

With the exception of sperm and egg cells, human cells have two sets of chromosomes, one inherited from each parent. Organisms with only one set of chromosomes, however, can be extremely useful for scientific research. “Cells with a single set of chromosomes are a powerful tool to study gene functions, because you can modify just one copy of the gene to analyse its effects on the organism,” says Óscar Fernández-Capetillo, Head of the CNIO Genomic Instability Group and leader of the study.

Haploid cells in microorganisms such as yeasts have been extensively used for gaining powerful insights that have revolutionised the history of biomedicine. Yeasts were used, for instance, by the 2001 Nobel Laureates in Physiology to identify key molecules that regulate the cell cycle in eukaryotic organisms. However, yeasts and humans are separated by a billion years of evolution, and many biological mechanisms have not been retained, which means they cannot be studied in these microorganisms.

Since mammalian haploid cell cultures were not available until recently, researchers have used other tools to conduct genetic screens, such as interfering RNA. However, these alternative strategies have non-specific effects that are inconvenient for any genetic approach. Over the past years, scientists have managed to isolate mammalian haploid cell lines. First, a near-haploid cell line was obtained from a leukaemia patient; years later, methods were developed to establish embryonic haploid stem cell lines from a number of mammals, including humans. However, all these animal haploid cell cultures are highly unstable and become diploid quickly.

“Two years ago, we found that haploid cells activate mechanisms of cell death via the p53 protein; as a result, haploid cells are no longer viable in culture and progressively disappear,” says Fernández-Capetillo(1). “These results explained why it is so difficult to maintain animal haploid cells in the lab.”

Now, CNIO researchers have used chemical screening methods to search among nearly 1,000 compounds for those that select haploid cells against cells with a larger number of chromosomes. The study revealed that a precursor in the synthesis of the anticancer agent Taxol named DAB (10-Deacetylbacattin III) allows haploid cells to grow better and replace diploid cells in cultures.

Regardless of the usefulness of these results for researchers working with animal haploid cells, the study is also of relevance for cancer researchers, as the effects of DAB can also be obtained with small doses of the anti-cancer drug Taxol. In this context, the authors want to propose that low doses of taxanes might allow for the selective elimination of polyploid cells, which recent genomic studies indicate might be present in up to 37 per cent of human tumors. Thus, “the results of this study might help identify cancer patients that might preferentially benefit from a treatment using taxol or other taxane derivatives,” says Fernández-Capetillo.