Home | News | CNIO News | Soraya Sáenz de Santamaría: “The leaders of the major parties should reflect on why they have never accepted female candidates for the presidency of the Spanish Government”

Soraya Sáenz de Santamaría: “The leaders of the major parties should reflect on why they have never accepted female candidates for the presidency of the Spanish Government” 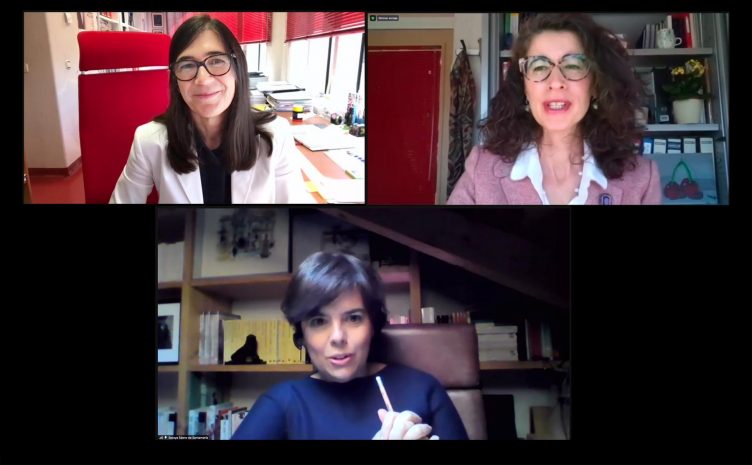 “Access of women to positions of responsibility has already begun to be linked to business issues,” emphasised this member of the Spanish Council of State

“None of the women who tried to preside over one of the major Spanish parties have succeeded. In some cases, the party rank and file elected a woman, but the party leadership did not,” explains Soraya Sáenz de Santamaría. “Whether there is a woman candidate for the presidency depends on whether the major parties that can govern have the will to do so. The leading members of these parties should reflect on this.”

The former vice-president of the Spanish Government made this statement in response to a question from a woman who attended the zoom conference she gave on Female Talent and Crisis Management, organised by the Women in Science Office (WISE) at the Spanish National Cancer Research Centre (CNIO).

“I don’t think that the problem of there not having been any female presidential candidates in Spain is a matter of lack of social maturity; it has always been a circumstantial issue, which has prevented this from happening,” Sáenz de Santamaría clarified.

This state attorney on leave of absence, who is currently a member of the Council of State and a partner in one of the country’s leading law firms, Cuatrecasas, gave a broad overview of the state of gender equality in the Spanish labour market, the problems faced by women in it, and the male chauvinism that is still widespread in organisations.

Soraya Sáenz de Santamaría also warned that the COVID-19 crisis “is particularly affecting the participation of women in social life, a space that women cannot afford to lose.” “The amount of time and the type of telework should be the same for women and men.” “In these times of crisis, the leadership of teams, in general, is put to the test, and while they should always be gender balanced, in these times this need is even more pronounced.”

And she outlined two major changes that the current pandemic will lead to: “This is a transformative crisis in terms of attitudes, work, and leisure, but also in terms of priorities and the way we think. And it has given us back a sense of vulnerability that we had lost,” the former vice-president reflected. “Secondly, the COVID-19 narrative has overshadowed everything; it has obscured other debates such as those on cybersecurity, the impact of artificial intelligence, the problem of the environment or that of female talent, which is essential for achieving gender parity and equality.”

“The impact that COVID-19 could have on the equality of women is a cause for concern,” she warned, “because it could mean a setback in women’s equality and their access to certain jobs.” And among the elements of this crisis that could worsen the situation of women, Sáenz de Santamaría mentioned the poor economic situation, more cramped living conditions, the problems of isolation for battered women, violence in deserted public spaces, and a greater burden of household chores and caregiving due to the confinement and the closure of schools.

Sáenz de Santamaría also reflected on whether women are better at managing crises than men. “It is still much more difficult for women to reach high-level positions of responsibility, we have to build longer and more difficult professional careers to reach them, and we have developed a greater capacity for suffering as a result.” And this means that when it comes to crisis management, “we have had to dedicate more time, receive more training and gain more experience, and perhaps this is why women have been more successful in crisis management,” she said.

Concerning women’s access to senior positions, Sáenz de Santamaría pointed out that “while 70% of professionals in many fields are women, not even half of them obtain management positions and, in the legal sphere, female partners amount to less than 20% in the majority of law firms worldwide.”

The problem, concludes the former vice-president, is that although more and more women are joining boards of directors to the point where they make up 30% of them, the women who are appointed did not make a career within these organisations – they are only temporarily part of them. That is why it is important for organisations to promote women into their own cadres, to create a pool of women.”

Among other issues analysed by the former vice-president were the unknowns posed by the new teleworking scenario after COVID-19 (“in which women should not stay at home, but return at the same time as men”); the male chauvinism that continues to flourish (“often, when a woman puts forward an idea, it is dismissed and when it is taken up by a male member of the team it seems like a stroke of genius”), the wide range of types of leadership (“there are as many ways of leading as there are leaders”) and the need for women to have more confidence in themselves to reach high positions (“we have to stop looking back and justifying ourselves”).

Regarding this last question, Maria Blasco, Scientific Director of the CNIO, quoted Hillary Clinton‘s book What Happened, in which she repeatedly justifies why she ran twice for the Democratic Party primaries and once for the US presidential elections, and asked the former vice-president how many times she has had to justify herself, unnecessarily, for getting to where she is. To which Sáenz de Santamaría replied: “It is true that women suffer from the impostor syndrome, we are more aware of what we have than what we don’t have, and we must be able to overcome this.”

Finally, Soraya Sáenz de Santamaría pointed out a significant aspect that is changing in favour of women’s promotion to leadership positions: “This is beginning to be linked to business issues. The absence of gender equality is less and less appreciated by investors, and clients demand teams that are formed based on equality criteria because they consider such teams to be more balanced and have a greater variety of viewpoints.”