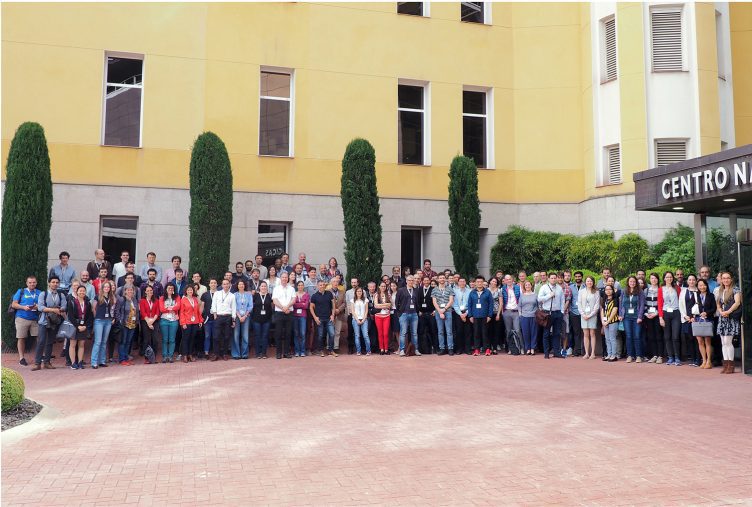 Around 20 experts from different countries will meet at CNIO–“la Caixa” Frontiers Meeting (20-22 May) on structural and molecular biology of DNA damage response, to discuss the options offered by the new methods for atomic-level visualisation of biomolecules

The conference will focus on DNA damage, failures in DNA-repair mechanisms and cancer

Cryogenic electron microscopy (cryo-EM), frequently referred to as ‘the resolution revolution’, was developed by the winners of the Nobel Prize in Chemistry 2017. With this technique, which is being used by a growing number of laboratories, scientists can visualise, for the first time ever and in high resolution, how cellular nanomachines work. The upcoming CNIO-“la Caixa” Frontiers Meeting(CFM), to be held from 20 to 22 May, will gather, at the Spanish National Cancer Research Centre (CNIO), around 20 experts in this and other structural biology techniques, which are becoming highly significant in the search for strategies and drugs to stop cancer.

Held since 2010, CNIO–“la Caixa” Frontiers Meetings are leading international conferences on the latest developments in cancer research. This year, the potential use of novel approaches will be analysed for studying DNA damage and naturally occurring DNA-repair failures – a cross-cutting theme in cancer research.

“Since DNA is continuously exposed to endogenous and exogenous risk factors, for example, sunlight or cigarette smoke, maintaining DNA integrity is crucial. There are a number of pathways to ensure the information contained in DNA is not lost or damaged. However, when these pathways fail, DNA damages accumulate, and this can lead to cancer or other diseases,” the event organisers explain.

Since the relationship between DNA-repair mechanisms and cancer was found 50 years back, scientists have focused on how these mechanisms can be used to beat the disease. PARP inhibitors, for instance, have been approved for some types of breast and ovarian cancer. PARP is an enzyme involved in recovery from DNA damage. Its pharmacological inhibitors prevent DNA from being repaired and, consequently, the cells die due to excessive damage.

At CNIO, numerous groups and researchers are working on cellular response mechanisms to DNA damage and how they can help find new options to stop cancer.

Against this background, the huge amount of knowledge acquired in recent years through high-resolution techniques for structural determination of biomolecules, such as cryo-EM, has raised expectations among researchers.

‘It is not that frequent that we scientists can witness a major revolution in our fields of research,’ says Eva Nogales, Spanish researcher at the Lawrence Berkeley National Laboratory in California, USA. Nogales, a pioneer in cryo-EM, will participate in CFM.

Cryo-EM has been used since the 1990s, but at that time, resolution (that is, the ability of a microscope to distinguish detail) was not as high as today. Although the technique helped understand the organisation of macromolecular complexes, in most cases it was not able to determine protein structure at atomic-level resolution. Subsequent improvements in cryo-EM enabled researchers to observe the structure and movement of protein complexes.

With this technique, researchers can now understand how protein complexes work, something that was considered impossible until recently. Molecules engage in interactions that resemble those in the good old Tetris game. If you know the 3D structure of a molecule, you can try and design a match for a functionally essential element or surface in it and block it. A growing number of laboratories are using this technique to try and find new drugs.

In recent years, CNIO has focused on these revolutionary atomic-level visualisation methods, proof of which is the strengthening of the Structural Biology Programme, led by Óscar Llorca, who joined CNIO two years ago.h

Llorca, one of the meeting’s organisers, describes the importance of structural biology by comparing it to a car repair shop: “When your car breaks down, you identify the part that does not work properly. Maybe you can guess what is causing the failure, but it is only when the mechanic looks at the car’s parts that you understand what is going on and a solution can be provided. This is what we do in structural biology: We look at biomolecules and we try to understand how they work and what leads to diseases when these parts fail.”

Nogales established the basis to understand the anti-cancer activity of Taxol, one of the most widely used chemotherapy drugs. The specific shape of the Taxol molecule allows it to bind to microtubules, large molecules forming cylinders that play a major role in cell division. Microtubules splay apart like a banana peeling. When they are bound to Taxol, they cannot do so and, consequently, cancer cells cannot divide and the tumour will shrink.

A further achievement by Nogales was the visualisation of the molecular structure of telomerase, the enzyme that repairs the ends of linear chromosomes. And yet another relevant study by the Spanish researcher was the visualisation of another key process in the life of cells: the translation from gene to protein. “Gene expression regulation has fascinated biochemists for decades, but the molecular complexity of gene transcription, the first step in the expression of genetic information, was overwhelming for conventional methods. Now cryo-EM has opened the door to understanding the process,” Nogales says.

Regarding gene expression, currently one of the most dynamic fields of research, Patrick Cramer, Director at the Max Planck Institute for Biophysical Chemistry in Gottingen, Germany, will show the results of his work at CFM. The team led by Cramer was the first in the world to visualise the nanomachines involved in gene transcription. Alessandro Vannini, from the Institute of Cancer Research (ICR) in London.

Another field that is witnessing lots of scientific publications is the structural basis for nucleosome remodelling. Nucleosomes are DNA-protein complexes that consist of DNA wrapped around a structure made of proteins. Changes in nucleosome structure allow the entry of DNA-repair machinery and facilitate epigenetic regulation of DNA repair. This subject will be discussed by Karl-Peter Hopfner, from the Ludwig Maximilian University of Munich, Germany, and Song Tan, from Penn State University, Pennsylvania, USA, among others.