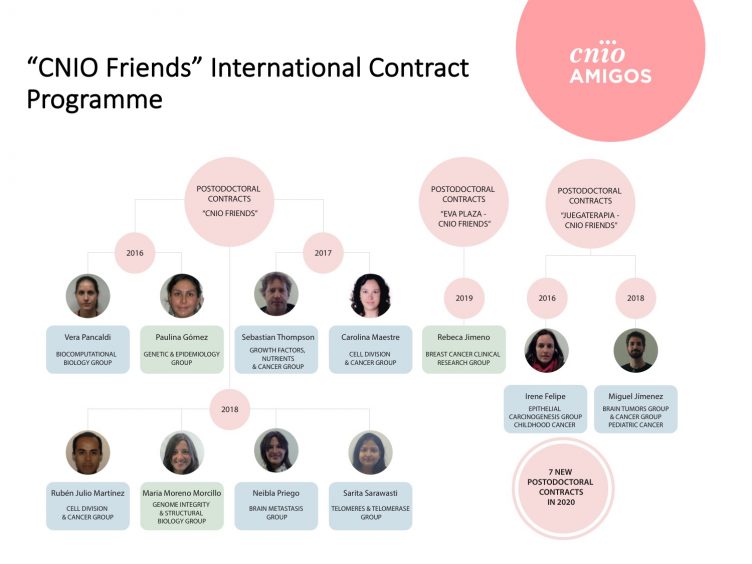 In a virtual meeting held on July 2, the CNIO Friends had the opportunity to learn about some of the cancer research projects that are being carried out at the Centre thanks to their solidarity, guided by researchers hired through the CNIO Friends International Contract Programme

Thanks to the CNIO Friends, which consists of private individuals, patient associations, companies and institutions, more than 2.7 million euros have already been raised for the promotion of highly competitive cancer research projects

Due to the exceptional situation caused by the SARS-CoV-2 coronavirus pandemic, this year the meeting took place virtually and more than 100 attendees, including Friends and CNIO researchers, joined.

Maria Blasco opened the meeting explaining the latest institutional and research milestones. Next, several researchers who joined the CNIO through this International Contract Programme, presented the projects they are working on: Paula Martínez represented Sarita Saraswati (Telomeres and Telomerase Group), who investigates how telomere dysfunction causes kidney and liver fibrosis, which are risk factors for the development of kidney and liver cancer respectively; Rebeca Jimeno (Breast Cancer Clinical Research Unit), who seeks effective therapeutic combinations against triple-negative breast cancer – one of the most aggressive types of breast cancer – and for which there is as yet no specific treatment; Rubén Martínez (Kinases, Protein Phosphorylation and Cancer Group), who studies how RET oncogene activity is altered in certain types of cancer -such as lung and breast cancer, and neuroblastoma- to try to improve their treatment; and María Moreno (Genome Integrity and Structural Biology Group), who focuses on the study of the three-dimensional structure of the protein CAD – overactivated in all types of cancer – to apply this knowledge to the development of therapies.

Luz Casal spoke with Maria Blasco about the solidarity initiative she conducted during the months of confinement due to the pandemic, in which she spoke to more than 2,000 people by telephone to help them cope with the isolation. Blasco herself also participated in this initiative.

It was not the first time that the artist showed her commitment to CNIO cancer research: she previously participated in the ‘Present and Future of Cancer Research’ event, a CNIO WISE talk and the #CNIOStopCancer campaign. As a surprise closing of the talk, Luz Casal performed a fragment of her song ‘Un nuevo día brillará’ (‘A new day will shine’).

The meeting was intimate and at times very emotional. During the Q&A section, attendees expressed their interest in learning about the details of CNIO’s research and where cancer study is headed in the future.

Active solidarity of society and companies

The highly competitive international call for proposals for the CNIO Friends International Contract Programme is aimed at engaging young talent to promote promising new lines of cancer research. So far, 13 researchers have joined CNIO to carry out research on metastasis, childhood cancer, kidney and liver cancer, among other lines of research.

In recent years, institutions and foundations collaborated directly and very actively with the programme and funded full fellowships such as Juegaterapia; this also applies to large and small businesses with other funding formulas, such as L’Oréal Spain, Exterior Plus or Asisa Vida. This year there are an additional two fellowships of 100,000 euros each; one of them is funded by the Humanismo y Ciencia Foundation to promote the development of preclinical models for the study of cancer, and the other is funded by a private foundation.

The CNIO Friends initiative was launched in December 2014 to meet a growing demand from society, which, year after year, is reflected in the reports of public perception of science: the interest in sponsorship and new forms of citizen participation in science and research and, more specifically, in the field of medicine and health. At its inception, the founder of this initiative and director of the CNIO, Maria Blasco reminded us that “the generosity of those who support us is crucial and the new CNIO Friends platform is a way of connecting with society to thank people for their effort and better explain what it is that we do.”

Over the last 5 years, CNIO Friends also received support from patient associations and prominent figures such as Alejandro Sanz and David Bisbal through the agreement with Juegaterapia; José Mota and Mago More, who participated in the video ‘With many bits, we do a lot!’; Enrique Arce, Luz Casal, Christina Rosenvinge and María Hervás, who participated in the campaign #CNIOStopCancer earlier this year; and Pablo Alborán, who had planned to organise the ‘Prometo Solidario’ concert in support of the CNIO in April, currently postponed due to the situation caused by the Covid-19 pandemic.

In addition, projects such as CNIO Arte with the support of the Banco Santander Foundation; and activities such as the event ‘Modern science rescues Victor Frankenstein’, held during 2019 Books’ Night in collaboration with CaixaForum Madrid, are intended to raise funds for CNIO Friends, by bringing science closer to society through culture.