Home | News | CNIO News | U.S. Department of Defense will finance a new therapeutic approach against the most aggressive type of prostate cancer

U.S. Department of Defense will finance a new therapeutic approach against the most aggressive type of prostate cancer.
Coinciding with ‘Movember’, a month that raises awareness of men’s health issues 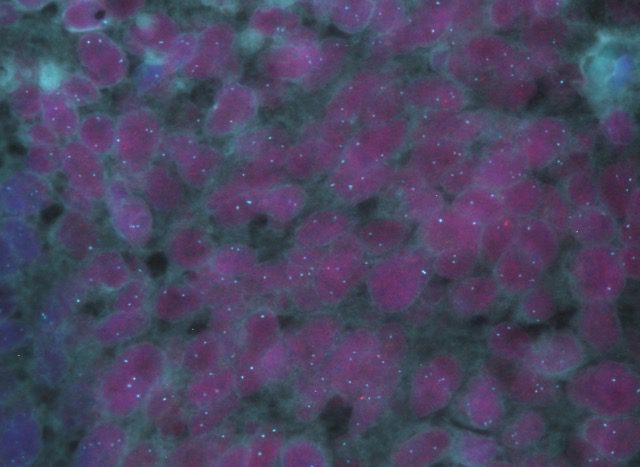 Cancer sample with loss of two copies of BRCA2 gene. The BRCA2 gene is connected to breast and ovarian cancer and is the gene associated with DNA repair most commonly altered in prostate cancer. /CNIO

The U.S. Department of Defense awards one of the most important grants in biomedical research and in this occasion they will allocate 2 million dollars for this project co-led by the University of Washington, CNIO and VHIO

The U.S. Department of Defense has granted the “Impact Award” to explore new therapeutic options against advanced prostate cancer – scientifically known as castration-resistant or hormone therapy resistant prostate cancer- to a multidisciplinary team of researchers made up of the Prostate Cancer Clinical Research Unit of the Spanish National Cancer Research Centre (CNIO), led by David Olmos, the Prostate Cancer Translational Research Group of the Vall d’Hebron Institute of Oncology (VHIO), led by Joaquín Mateo, and the Genetics and Solid Tumors Laboratory of the University of Washington, led by Colin Pritchard. The team will receive a 2 million dollar grant for this 3-year project and will examine the identification of new markers as predictors of response to treatment, with the aim of identifying which patients will respond worse to therapy and thus offer them other therapeutic options.

Prostate cancer is one of the most common cancers in males in Spain and in the West and the second world-wide. It is the third most common cause of male death in Europe, even though over the last several years the survival rate is continually rising, most likely due to early detection. The most common treatment in the advanced stage is the hormone-blocking therapy, but some patients develop aggressive tumours that are resistant to this type of treatment: up to 90% of the patients that develop resistance also develop metastasis, most commonly in the bones and lymph nodes, but also occasionally in the liver and lungs. The average survival rate of the patients in the advanced stage is about 2 years after the diagnosis. Moreover, one in three patients respond worse to the approved therapies for prostate cancer, but until this day we do not have a better way of identifying and predicting their response to treatment.

The project will try to identify this group of patients through the development of new markers as predictors of response to treatment and will conduct a clinical trial to test if the therapy that works for other tumour types like breast and ovarian cancer could prove to be effective for the patients with advanced prostate cancer that show these markers.

The researchers will investigate the genetic and molecular changes associated with defects in the DNA repair mechanisms; that is, if the tumour cells repair the errors produced in their genetic material correctly or not. “Our line of work has always looked into those mechanisms” explains Elena Castro, from the CNIO Prostate Cancer Clinical Research Unit. “It is an approximation that has given very good results in prostate cancer research”. The researchers expect these tumours to respond to carboplatin therapy, a drug that is very effective in the tumour types that show these kinds of defects, such as breast and ovarian cancer. “These therapies work by impeding that the cells repair their DNA defects. Due to the fact that cancer cells have far many more genetic defects than normal cells, these drugs are very effective in producing their breakdown and death.

In the first part of this project, we will study the tumour samples that were collected from the patients participating in the PROREPAIR-B study; the first worldwide prospective study conducted, to date, in patients with advanced prostate cancer that carry heritable mutations. PROREPAIR-B is a study coordinated by CNIO that has monitored more than 400 patients since 2013, to analyse if their DNA damage repair genes have inherited genetic alterations and how these affect their response to treatment. Now these samples will be sequenced to check the behaviour of the alterations in these genes that are not inherited and that only occur in the tumour.

After that, the VHIO team led by Joaquín Mateo will search for biomarkers for DNA repair defects in those patients, since these defects not always originate from an inherited genetic mutation. “Over the last few years we have shown that an important number of patients with advanced prostate cancer develop DNA repair defects in their tumours, even though there is no inherited mutation”, explains Joaquín Mateo, VHIO researcher and Vall d’Hebron University Hospital oncologist. “We also know that some of the tumours behave in a similar manner to the ones having these mutations, even if we don’t identify them. This is why we wish to study the biological patterns associated with the clinical patterns and to do that we will study these tumours using different tools in the laboratory”, adds Mateo. The goal is to find new signs of these errors (more than just genetic mutations) that would permit a faster decision-making on which treatments to choose.

Lastly, the CNIO team, with the help of VHIO and other Spanish centres, will conduct a clinical trial to confirm if the carboplatin therapy could be effective in advanced prostate cancer. “We know that carboplatin works really well in tumours with DNA repair defects from patients with breast and ovarian cancer, and we suppose that it will also work for patients with prostate cancer, but we are not certain at this stage”, says Olmos. “But instead of selecting patients based on them having genetic mutations that could provoke defects in DNA repair, as is commonly done, they will be selected using biomarkers that were previously detected, as we believe that it will be more reliable when determining the efficacy of the treatment. In other words, we will select patients based on whether the tumour repairs its DNA or not, independently of their genetic profile”.

Another advantage is that this therapy is affordable and easily accessible. A type of drugs that are known to be effective on tumours with DNA repair defects are the PARP inhibitors, but their price is high. “If carboplatin proves to be a good therapeutic option, the results of our trial will have a positive impact on the patients”, concludes Olmos. Mateo adds: “Since it is a drug that has already been approved and has been routinely used for other types of cancer, like breast and ovarian cancer, carboplatin’s way to the clinic to benefit patients with prostate cancer will be much shorter than usual. There is little experience with this drug for the treatment of the prostate cancer, but for now it looks promising. What we aim with this study is to be able to confirm it”.

The U.S. Department of Defense created the Congressionally Directed Medical Research Programs (CDMRP) in 1992; one of the nation’s most important sources of funding for biomedical research, together with the National Institutes of Health (NIH). In 1997, they launched the Prostate Cancer Research Program to fund high-impact research with near-term clinical relevance for this type of tumour.