In a ceremony hosted yesterday in Barcelona, the Obra Social “La Caixa” awarded 40 grants to talented young doctoral researchers from around the world so that they may carry out their doctoral research in leading research centres around Spain, including the Spanish National Cancer Research Centre (CNIO), the Spanish National Centre for Biotechnology (CNB–CSIC), the Institute for Research in Biomedicine (IRB Barcelona) and the Centre for Genomic Regulation (CRG).

With this new fifth round of awards, the Spanish National Cancer Research Centre (CNIO) has received a total of 50 grants (10 each year) that have made it possible for young researchers from 23 countries around the world to carry out their four-year doctoral research programmes.

During the ceremony, the vice-director of Basic Research at CNIO, Alfonso Valencia, thanked the Obra Social “La Caixa” for its effort in promoting research excellence, and highlighted the need to encourage patronage in order to promote the diversification of research funding.

Almudena Chaves, who joined CNIO’s Growth Factors, Nutrients and Cancer Group—led by researcher Nabil Djouder—last October, was chosen to say a few words in representation of the 10 students who received the grants this year. Thanks to these grants, over the next four years Chaves will be able to study how nutrients affect the regulation of stem cells in the intestine and their role in colon cancer.

The ceremony was chaired by the secretary of State for Research, Development and Innovation, Carmen Vela; the general director of “La

“La Caixa” ’s grant programme for doctoral studies in biomedicine has awarded 200 grants over the past five years, investing a total of around 23 million euros.

From 2013, this doctoral programme will be directed towards centres that have received the Severo Ochoa award in 2011, amongst them CNIO. 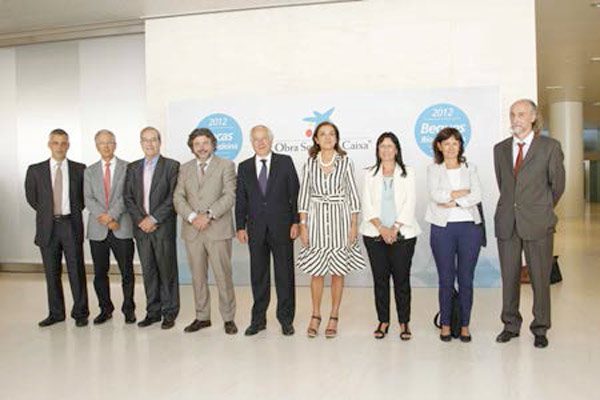 The representatives of the research institutes that were awarded grants standing next to representatives from “La Caixa” and the Secretary of State for Research, Development and Innovation, Carmen Vela /CNIO 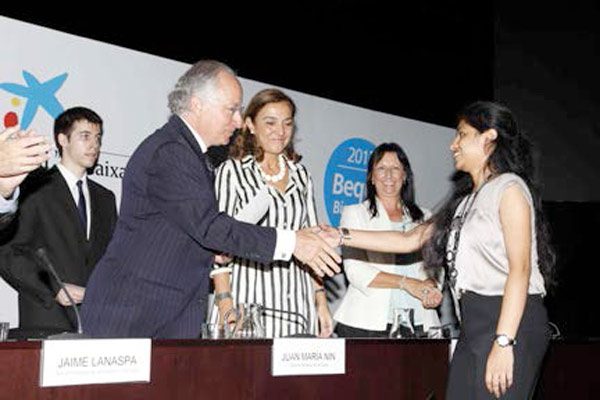