The joining of different scientific disciplines, the main theme of the CNIO conference ‘New horizons in cancer research’ 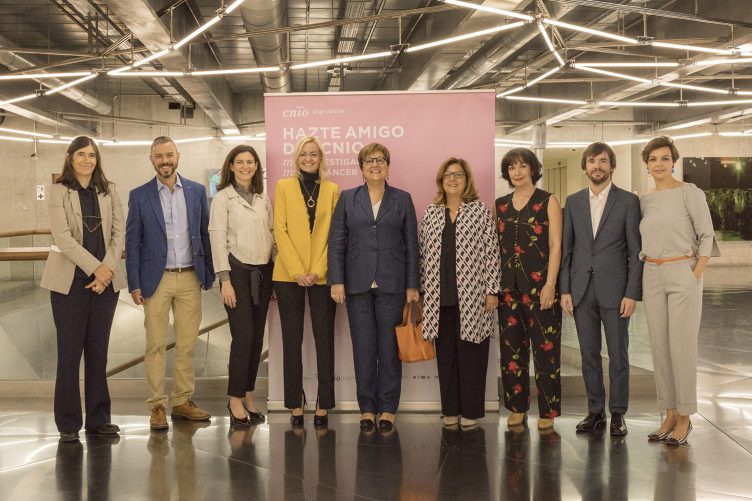 The researcher and theoretical physicist at Columbia University Raúl Rabadán gave the keynote lecture ‘The Genomic Revolution in Cancer’, in which he focused on how the era of Big Data and the interaction between different disciplines such as oncology, physics and engineering is revolutionising cancer research

Afterwards, a round table was held with the participation of the CNIO Director Maria Blasco, CNIO researcher Manuel Valiente, oncologist Yolanda Fernández of the Central University Hospital of Asturias, and former patient and ‘CNIO Friend’ Mila García Calvo

On Tuesday, September 24, the Spanish National Cancer Research Centre (CNIO) celebrated World Cancer Research Day with a conference in which, under the title ‘New horizons in cancer research: from bench to bedside’, the milestones and the future of cancer research were addressed, as well as the latest advances in the study of metastasis -causing 90% of cancer-related deaths-, myths about the disease to overcome, and the process leading from making a discovery to its application in patients. The event was aimed at the general public and was held at CaixaForum Madrid with the support of “la Caixa”.

The conference was opened by Ángeles Heras, Secretary of State for Universities, Research and Innovation; Raquel Yotti, Director of the National Institute of Health Carlos III (ISCIII) to which the CNIO is affiliated; Sonia Vidal, of the Research and Innovation Department of the “la Caixa” Foundation; and Maria Blasco, CNIO Director. They emphasised the key role of researchers and the need to join the efforts of all scientific disciplines, and the importance of social support to achieve new, more effective cancer therapies. The event was presented by journalist Cristina Villanueva.

The conference started with the keynote lecture ‘The Genomic Revolution in Cancer’, by Raúl Rabadán, Professor of the Department of Systems Biology and Director of the Program for Mathematical Genomics at Columbia University, United States.

Cancer as a disease of the genome

During his talk, Rabadán explained that cancers are diseases of the genome and that each tumour is the result of a different evolutionary history. “There may be 10,000 mutations in a single patient. Sunbathing, smoking, age, etc., all make these mutations appear, although most of the factors that cause them are still not fully understood.”

“Centres and hospitals around the world are collecting thousands of patient data,” which is a great opportunity to obtain tens of thousands of biological data that have great predictive value. To organise this data, Big Data analysts are needed. Rabadán gave the example of glioblastoma multiforme, the most common and aggressive primary malignant tumour in adults, which has a low survival rate and of which there are 1,500 new cases per year in Spain. “Machine learning is being used to try to predict the response of patients to treatments, such as immunotherapy, to which only around 10% of glioblastoma patients respond very well. The question is: What is special about these patients that makes them sensitive to immunotherapy?”

Other questions that Big Data can help solve are: how do tumours evolve?; what is the role of the immune system in this evolution?; or what distinguishes the different parts of a tumour?

Big Data and how to approach cancer as a complex system

Rabadán, PhD in Theoretical Physics, began his research career at the European Laboratory for Particle Physics (CERN) in Switzerland and at the Institute for Advanced Study (IAS) at Princeton. In 2006 he joined the Systems Biology program at IAS. The so-called systems biology approach tries to tackle biological problems using different disciplines (such as molecular biology, computer science, physics, and mathematics), bearing in mind that biological processes do not occur in isolation but rather constitute interrelated systems.

From his current position at Columbia University, which he joined in 2008, Rabadán leads an interdisciplinary laboratory with mathematicians, physicists, computer scientists, engineers and medical doctors to solve biomedical problems through computational models. At this very moment, he is co-organising with the CNIO the international Congress CNIO-“la Caixa” Frontiers Meeting. Heterogeneity and Evolution in Cancer, that brings together in Madrid more than 130 oncologists, biologists, bioinformaticians, physicists and mathematicians to uncover the heterogeneity of cancer with Big Data and personalise its treatment.

The joining of physicians and researchers, and patient empowerment

After the lecture, there was a panel discussion moderated by Cristina Villanueva and with the participation of Maria Blasco; Manuel Valiente, Head of the CNIO Brain Metastasis Group; Yolanda Fernández, Head of the Breast Cancer Section of the Central University Hospital of Asturias (HUCA); and Mila García Calvo, former cancer patient and CNIO Friend.

“At CNIO we want to understand cancer and find the universal mechanisms that are behind many tumour types,” Blasco explained, “that is why we try to look not so much at the type of cancer but at what makes it appear, evolve and become resistant to treatments.” She also emphasized the importance of collaboration with the private industry for the development of new drugs and reminded the public that CNIO is actively involved in open innovation programmes of international pharmaceutical companies, which has resulted in an influx of more than 25 million euros into the Centre in the last 6 years. “We hope that these interactions will keep on giving rise to new treatments originating at CNIO,” she said. “We must show that cutting-edge research of excellence brings benefits to the Health System.”

In the words of Manuel Valiente, “having an Experimental Therapeutics Programme at the CNIO that has many thousands of potential new drugs has allowed us to develop projects in which we can test all these molecules, with the hope that some of them will help reduce brain metastases.” Valiente referred to one of his latest studies on the reduction of these metastases and stressed the importance of partnerships with physicians to conduct clinical trials with more patients and translate the results to the clinic.

Yolanda Fernández stressed that only 5-10% of tumours are inherited and that we inherit the genetic alterations that predispose to them, and not the tumours themselves. More specifically, she emphasised that for breast and ovarian tumours it is important to inquire about family history to decide, in consultation with an expert in genetic counselling, if genetic testing is indicated. “A more informed patient is better able to make a decision,” she said. “We have arrived at the empowerment of the patient, and this empowerment should be used for the improvement of cancer research.”

In this sense, Mila García Calvo explained that she collaborates with CNIO Friends as “a way to give back what I was given, and to thank the researchers who are working so that people like me can be cured.” The ‘CNIO Friends’ initiative, launched by CNIO at the end of 2014, has raised nearly two million euros through personal donations, from companies and legacies, and has allowed the International Postdoctoral Contract Program CNIO Friends to be launched, aimed at hiring young talent to promote new lines of cancer research. To date, 11 scientists have been contracted to carry out projects on among others metastasis, childhood cancer, and kidney and liver cancer.