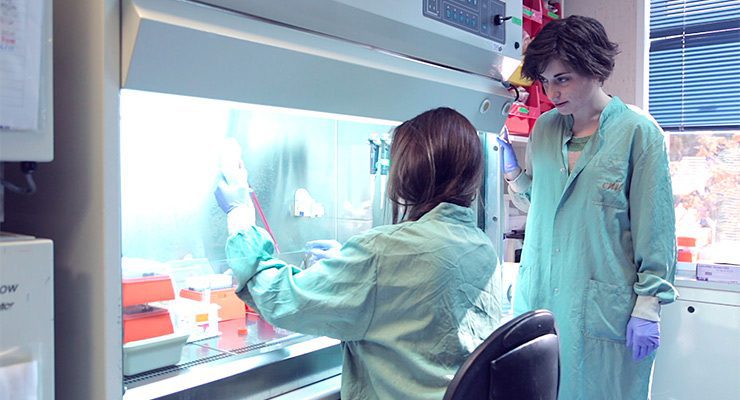 Participants of 'Immersion in the lab', during the first edition of CNIO & The City.

This initiative has once again been selected to receive funding as part of the FECYT- Ministry of Science, Innovation and Universities Grants Programme to Foster Science and Technology Culture and Innovation

This edition, which proves to be just as popular as the previous one, will focus on the ‘co-creation’ of knowledge and will include new STEAM activities

For the second year running, the Spanish Foundation for Science and Technology (FECYT) – Ministry of Science, Innovation and Universities, has selected ‘CNIO & The City’ ?the education and dissemination project run by the Spanish National Cancer Research Centre (CNIO)? from among more than 600 applications, to receive funding as part of the Grants Programme to Foster cience and Technology Culture and Innovation, so that it can continue to build on the success achieved last year.

‘CNIO & The City’ is one of 83 projects selected within the category of ‘Creativity and Scientific Vocations’; its main goal is to stimulate scientific vocations and to foster creativity and the scientific culture in the education community. In this second edition, the activities will still largely be grouped into the following blocks: EDUCACNIO, aimed at pre-university students (on this occasion all-year-round groups and ages), and FORMACNIO, for their teachers. This year, the focus will be placed on ‘co-creation’, through the exchange of knowledge about the needs of different social groups. Furthermore, and even though it was already a transversal pillar of the project´s development, particular attention will continue to be placed on gender issues; highlighting, on the one hand, the figure of women in the sciences, and on the other, the presence of female students and teachers.

As a new feature of this second edition, ‘CNIO & The City’ will include gaming in the A of STEAM (Science, Technology, Engineering, Arts and Mathematics). We will also participate once again in the initiative that aims to disseminate science through ‘Binomio, a dialogue between art and science’. With ‘co-creation’ as this year’s mission, there will also be talks given by CNIO scientists at schools and teaching centres that, based on last year’s experience, have sparked great interest among teachers.

The project will continue to run activities such as ‘Immersion in the Laboratory’ and ‘My First Science Project’, which proved very popular at the previous edition of ‘CNIO & The City’, as well as to expand other activities, such as the science and vocational videos, which will include videos of CNIO scientists explaining what they do on a day-to-day basis. Furthermore, there will now be two ‘Stop Cancer’ training courses for teachers. The first one of them will take place from 16 to 20 July, in collaboration with the ‘West Madrid’ Regional Innovation and Training Centre. Registration is now open.

‘CNIO & The City’, which is returning with its batteries fully charged, first came about as a means of extending, in a fully inclusive way, CNIO’s commitment to its academic endeavours and Science Outreach, engaging young people and promoting Science as an attractive and necessary professional career for the development of society as a whole. At its second edition, the project hopes once again to achieve this (and to demonstrate it). All information about the project can be found on the website cnioandthecity.cnio.es and its social media sites, Twitter and Instagram (@CNIOandTheCity).