Forty volunteers will attend visitors during the tour 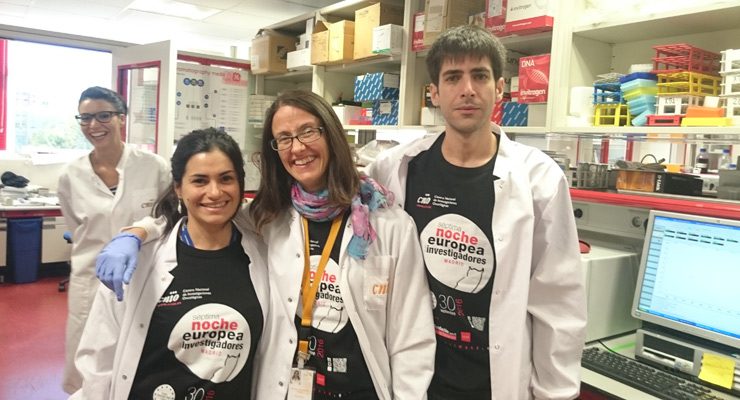 The European Researchers’ Night will take place on Friday 30 September and, once again, the CNIO will be involved. During this event, which will be attended by 200 people, the Centre will open its research projects to the public as part of its commitment to scientific dissemination and education.

We need science. This statement may seem obvious. However, if we look at the data it may not seem so self-evident. In 2015, four out of ten Spanish people (still) thought that science does more harm than good.

The survey, prepared by the Spanish Foundation for Science and Technology (FECYT), revealed that the two main reasons for the public’s indifference for science are a lack of stimuli and of understanding, in that order.

Correcting this lack of interest and understanding through dissemination and education is one of the CNIO’s lines of activity that has been gaining in importance in recent times. Researchers’ Night is one of the actions designed to achieve this goal.

“A scientist’s job is not limited to doing science, but to spreading science and educating future scientists,” explains Guillermo de Cárcer, researcher from the Molecular Oncology Programme at the CNIO and organiser of the European Researchers’ Night at the Centre together with the Dean’s Office. “In the past, I was taught and trained to be a scientist, and I feel indebted and obliged to do the same. Science should be available to everyone and scientists should work towards that goal,” he stresses.

With this in mind and under this year’s slogan, Be a scientist, meet scientists, a group of 40 CNIO volunteers will welcome our visitors and explain what we do. This task, for a Centre dedicated mainly to basic research, is not always easy but it is crucial if we want society to understand that what we do is important and relevant to their lives. Perhaps not today, but in the future.

As teaching is not about preaching, visitors will be able to take part in a simple (but revealing) exercise that involves extracting the DNA from tomato cells, mirroring one of the tests most frequently performed at the CNIO.

Finally, several researchers of various nationalities will take part in a speed dating session. Each one will respond to visitor’s queries for 15 minutes and interact with them. An excellent opportunity to extend knowledge, encourage vocations and to awaken an interest in science in the most sceptical-minded.

Besides from showing the visitors what the CNIO is and what we do here, “we would like them to see that scientists are not strange, boring people but quite the contrary,” says Cárcer. “We want to do away with this false impression. Our work is exciting and fun, and anyone can become a scientist”.

In the Community of Madrid, the event is being promoted by the Regional Ministry of Education, Youth and Sport and coordinated by the Fundación para el Conocimiento madri+d.