The scientist will open new lines of research in Spain, directed towards understanding the tumour micro-environment and its role in the development of metastasis

With the new hire, the CNIO reinforces its lines of cancer research and means to create a critical mass that accelerates the study of metastasis, currently a poorly understood process

The Spanish National Cancer Research Centre (CNIO)’s Molecular Oncology Programme has broadened its lines of research and brought metastasis specialist Héctor Peinado on board. After seven years of work at Cornell University in New York (USA), Peinado returns to Spain and moves his research to the CNIO, where he will study the micro-environment surrounding tumours and its role in the development of metastasis, which causes 90% of cancer deaths.

“Until a few years ago, the tumour micro-environment went generally unnoticed. Now we know that the communication between the tumour and its local environment as well as the rest of the organism is fundamental for understanding cancer and its complications”, says Peinado.

With this new hire, CNIO is seeking to strategically reinforce its cancer research lines, as well as to create a critical mass that allows it to accelerate knowledge and study metastasis, including the development of novel therapeutics.

Cancer is a set of highly complex pathologies of a genetic character, characterised by the abnormal proliferation of cells. In some cases, the tumour cells manage to disseminate themselves throughout the body via

the process of metastasis, which is the cause of death for most cancer patients.

In the majority of cases, the problems associated with cancer arise, not due to the primary tumour itself, but to the tumour cells that escape from it and jump into the blood flow to find a new place where a new tumour may form and develop. In many cases, the destinations are the organs whose alterations compromise the correct functioning of the body, and therefore the patient’s life.

The scientific community agrees that the early detection of this colonisation process could slow the disease down and improve patient survival. “The problem is that researchers have traditionally focused on studying the origin of cancer and not the metastatic process, about which we know rather little”.

NANOVESICLES THAT ‘TEACH’ THE TUMOUR NICHE

There are many questions about how this colonisation happens: how do breast cancer cells travel, accommodate themselves and grow in very different tissues such as the brain? What type of communication exists between the original tumour tissue and the host tissue? Will we be able to manipulate this language in the future and thus slow metastasis down?

In 2012 at David Lyden’s laboratory in the US, Peinado discovered how tumour cells release a set of very specific nanovesicles, technically called exosomes, which transfer biological information to the micro-environment that surrounds them to educate it and facilitate metastasis. “These nanoparticles prepare, along with other secreted factors, the fertile ground, the niche, so that metastasis can occur even before tumour cells are liberated into the blood stream”.

At the CNIO, Peinado will investigate the exosomes that circulate in the blood of cancer patients to define groups that are at risk of developing metastasis. To carry out this work, he will work closely with other CNIO research units and groups, such as the Melanoma Group and the Molecular Imaging Unit, with whom he will prepare new imaging techniques to predict and/or diagnose early metastasis.

Peinado’s team will also study markers that when blocked reduce the progression of metastasis, first in animal models and then in cell lines and cancer patients.

Back in Spain with his wife, who is also a researcher, he brings with him five of the ten research projects that he was working on in the US, some from prestigious institutions such as the National Institutes of Health (NIH), the Department of Defense (DoD) or the Melanoma Research Alliance.

All of them are important, but Peinado points out that “in the US, I wouldn’t have been able to continue working without the unconditional support of private foundations, such as the Paduano Family or the Sohn Conference Foundation, from whom I have received almost a million dollars over the last seven years. Thanks to them I have been able to develop my scientific career and I am where I am today”.

Héctor Peinado obtained his PhD in Science in 2003 for his research at the “Alberto Sols” Biomedical Research Institute in Madrid under the supervision of Amparo Cano. His PhD Thesis was awarded the Juan Abelló II Extraordinary Thesis Prize by the Royal Academy of Doctors. In 2008, he moved to the US, where he joined David Lyden’s laboratory (Weill Cornell Medical College, New York), a pioneer in the analysis of the metastatic niche. He has published more than 34 scientific articles. He became an independent investigator in 2013 and established his own research group at the HematologyKOncology Division of the Weill Cornell Medical College in New York. 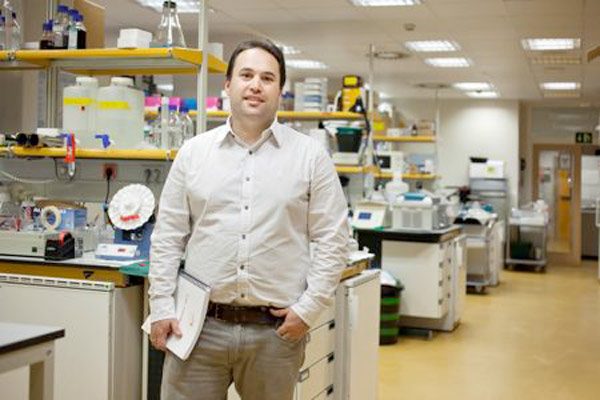