Home | News | CNIO News | The CNIO and the Weizmann Institute, together at the forefront of cancer research

The CNIO and the Weizmann Institute, together at the forefront of cancer research

“Curiosity moves us to change the future of this terrible disease. Cancer is very complex, and we need to work together to combat it”. These were the words of Moshe Oren, director of The Moross Integrated Cancer Center (MICC) of the Weizmann Institute of Israel, during the presentation of the symposium at the Ramón Areces Foundation last Tuesday. Some of the most prestigious researchers from this institution and the Spanish National Cancer Research Centre (CNIO) gathered before an audience of about 200 people. The director, Maria Blasco, highlighted the opportunities that could arise from this gathering to search for synergies and pursue new ways of collaboration.

The symposium, dedicated to ‘New Perspectives in Cancer Research’, was held on 26 and 27 September. For two days, researchers from the CNIO – the most important Spanish cancer research centre and one of the most relevant in the world – and from the Weizmann Institute – sixth in the ranking of the most innovative institutions, according to the Springer Nature publishing group – presented the most important improvements in this field.

The speakers, in addition to Blasco and Oren, also included Yosef Yarden, who spoke about resistance to targeted therapies and how to counter this resistance; Marisol Soengas, head of the Melanoma Group at the CNIO, who explained the MetAlert technology; and Ravid Straussman, who gave an interesting talk on the tumour microbiome. Oskar Fernández-Capetillo, Varda Rotter, Manuel Valiente, Sima Lev, Francisco X. Real, Liran Shlush, Rafael Fernández-Leiro, Itay Tirosh, Alejo Efeyan, Yifat Merbl and Marcos Malumbres completed the list of speakers at the symposium.

During the opening speech, Moshe Oren emphasised the changes this field of research has seen in the past 20 years and how “the collaboration between disciplines within the Institute’s campus and at institutional levels with other external partners is crucial to winning the battle against cancer”.

Along the same lines as Oren, Blasco stressed the common interest of both institutions for top-level research, “research that can change things”, and innovation. “We want to develop applications that can help us to diagnose, prevent and treat cancer,” said the CNIO director, who repeated her desire that this meeting would serve to “identify synergies that will help to establish strong ties between the CNIO and the Weizmann Institute in the near future”. 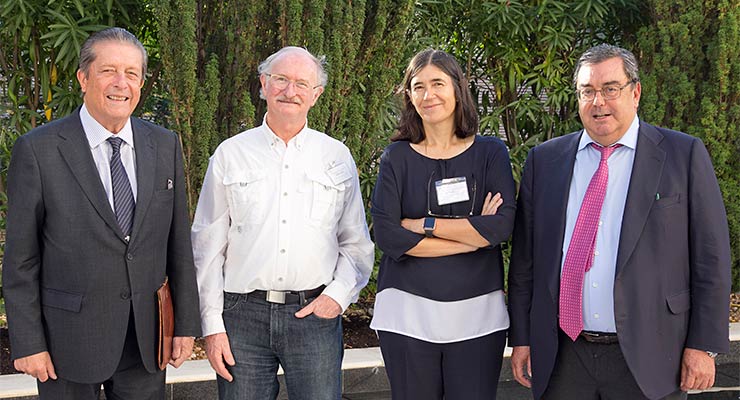