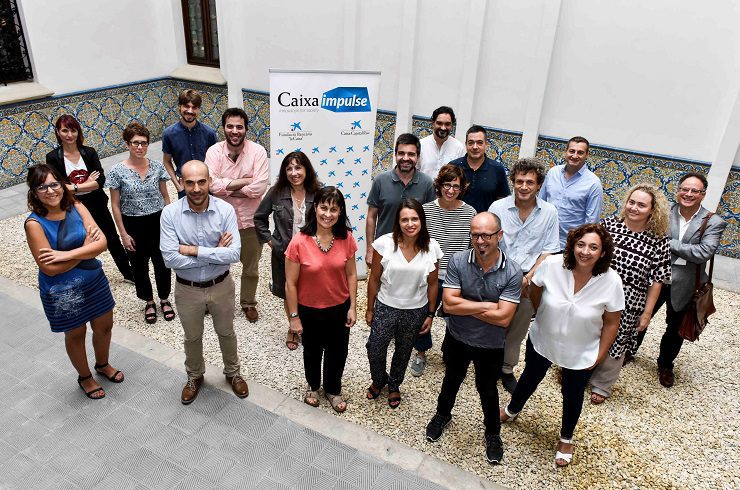 Representatives of the projects selected in the fourth edition of the CaixaImpulse programme, presented on Friday, September 7, in Barcelona.

La Fundación Bancaria ”la Caixa” and Caixa Capital Risc have selected two projects developed by the Spanish National Cancer Research Centre (CNIO) from a total of 20 projects awarded funding as part of the CaixaImpulse programme; a programme that aims to facilitate the transfer to society of scientific knowledge generated by research centres, universities and hospitals. The CNIO projects will focus on: developing new drugs against glioblastoma and lung cancer, a project presented by CNIO’s Telomeres and Telomerase Group, led by Maria A. Blasco, and the Experimental Therapeutics Programme, led by Joaquín Pastor; and genome editing as an anti-tumour therapy using CRISPR technology, presented by CNIO’s Molecular Cytogenetics and Genome Editing Unit, headed by Sandra Rodríguez.

In order to ensure the success of the initiatives selected, in addition to up to 100,000 euros in funding for each of the projects, CaixaImpulse offers a support programme whereby the participants have access to an eight-month programme involving: mentoring; training; expert advice and opportunities to build valuable contacts for their projects; constant feedback from the industry about each of the projects; the market and leading experts, with an assessment and commercialisation plan validated by mentors and experts; as well as in-market immersion to confirm the asset’s value-added proposal, adapt it and thus maximise the chances of success for its transfer to the market.

New targets for the treatment of glioblastoma and lung cancer

The main goal of the project TRF1 inhibitors as a first-in-class therapy for glioblastoma and lung cancer, by CNIO’s Telomeres and Telomerase group, is to develop a new drug against glioblastoma – the most aggressive form of brain cancer – and lung cancer, based on attacking telomeres, the structures that protect the ends of chromosomes.

The authors of this project have demonstrated in mice that TRF1protein, an essential component of the protein structure of telomeres, could be an important target against glioblastoma and lung cancer. The group has identified two compounds capable of blocking TRF1 and has been able to reproduce this effect in mice, eliminating TRF1 in vivo. The present project will investigate the mechanism of action of one of these compounds, and will study whether its properties are suitable to turn it into a drug.

The project Gene therapy for human cancers driven by fusion genes, by CNIO’s Molecular Cytogenetics and Genome Editing Unit, involves developing a novel gene editing technology that could help optimise cancer treatment. High precision editing techniques, such as CRISPR, have opened up avenues to the development of new therapies against cancer. The Unit led by Sandra Rodríguez has developed a gene editing technique based on CRISPR that attacks all types of cancers generated by fusion genes. These genes are constructed by joining together two previously separate genes, and have a great potential in oncology.

Researchers have shown in cell culture and in animal models that deletion of these fusion genes using the new gene editing technique is an effective strategy, but further studies are needed in order to improve its efficiency, specificity and safety. The aim of this project is to complete the development of this new genome editing technology until proof of concept is achieved in at least two types of cancer, and also to bring on board industrial partners capable of taking this technology to the market.

La Fundación Bancaria ”la Caixa” and Caixa Capital Risc launched this programme in 2015, with the aim of facilitating the transfer to society of scientific knowledge generated by research centres, universities and hospitals, through patents, business start-ups, and transfer agreements. The programme has so far awarded 7.5 million euros in funding and has promoted 58 initiatives, 10 of which have already become spin-offs, and a further 7 are in the process of being created.