Ten consecutive marathons to support cancer research at the CNIO 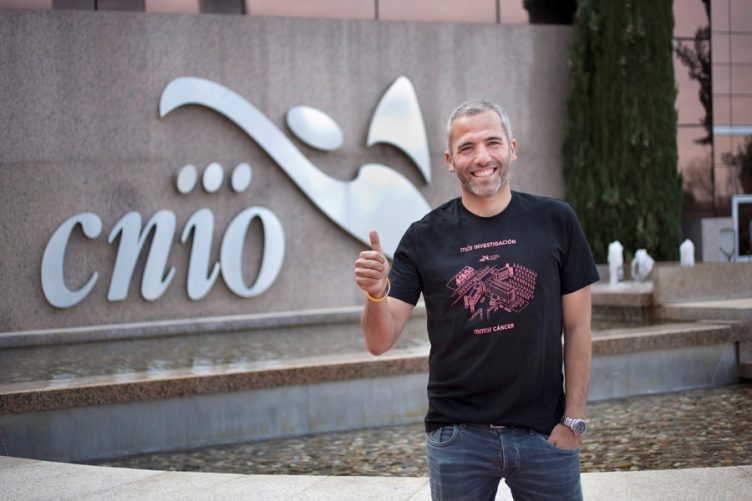 Marcos Argumosa will be running 420 km in ten days in support of the ‘CNIO Friends’ initiative, with the aim of raising funds for cancer research

The starting point of the challenge is Reinosa, in Cantabria, and it will cover the provinces of Palencia, Valladolid and Segovia before ending up at the CNIO on the 25th of April. On the last day he will participate in the Madrid Marathon

All of those who wish to support this initiative can purchase kilometres at the ‘CNIO Friends’ web page; each kilometre represents running distance (the runner’s physical activity)

The funds will be destined to cancer research carried out in the CNIO, including, among others, studies on metastasis and the development of safer and more effective drugs for cancer treatment

Marcos Argumosa (1979) from Cantabria, faces the challenge of running ten consecutive marathons, 420 km in ten consecutive days, to support CNIO Friends, an initiative recently launched by the Spanish National Cancer Research Centre (CNIO) aimed at raising funds for cancer research. Between the 17th and 25th of April, this sportsman will cover the distance between Reinosa in Cantabria and the CNIO headquarters, a route that runs through the Castilian provinces of Palencia, Valladolid and Segovia. He will complete his feat on April 26th by running in the Madrid Marathon.

All the companies and people who are interested in supporting Marcos’s endeavour can do so by purchasing kilometres at http://www.cnio.es/ing/colaborar/super-amigo.asp. With this gesture, they will be contributing to excellence in cancer research and will have the opportunity to become a part of the growing community of ‘CNIO Friends’.

THE PATH FROM SORROW TO HOPE

As Marcos Argumosa explains, the reasons for taking up this challenge are personal “so I asked myself how I could help in this fight. Finally, I decided to do it through what is my greatest passion, sports, and that’s when the idea of running ten marathons in a row to raise funds came to me.”

“I decided to do it for a research centre because I believe that things have to start at the beginning and because without research there is no possible cure. That’s why I chose the CNIO. Kilometre by kilometre, I want to turn sorrow into hope to overcome cancer.”

Just a few months ago, CNIO Friends has promoted itself under the slogan “More Research, Less Cancer”, as an expression of the Centre’s ultimate goal: excellence in cancer research and the development of innovative products in oncology.

The challenges faced by the CNIO in 2015 include giving patients greater access to experimental drugs and initiating studies in the area of metastasis, which is responsible for 90% of cancer deaths worldwide. In this regard, the CNIO has recruited two mestastasis experts this year, Héctor Peinado and Manuel Valiente — who have returned to Madrid from prestigious laboratories in the US — to study the environment surrounding tumours and its involvement in metastasis and cerebral metastasis, respectively.

Furthermore, thanks to the Clinical Research Programme, the CNIO has managed to create a consortium of Associated Clinical Units in public and private hospitals with the aim of conducting clinical trials in oncology. Via this Clinical Programme, hundreds of patients can already have access to experimental therapies in Spain without having to travel to the United States or other reference countries.

The CNIO is one of the world’s leading cancer research centres. In the field of oncology, as reported by a recent publication by the SCimago Institutions Ranking (SIR World 2014, SCimago), the CNIO ranked as the 4th best cancer research institute, according to the high impact of the articles published by its researchers.

Almost 400 researchers at the forefront of global science, strive to better understand the underlying mechanisms of cancer and to find ways to combat it. The ultimate goal of the CNIO is to advance knowledge and foster translation of scientific breakthroughs into novel and more effective ways to prevent, diagnose and treat cancer.

As a comprehensive Cancer Centre, the CNIO integrates both basic and translational research. We also have an active innovation programme that guarantees the transfer of knowledge from our scientific discoveries to the market and bedside and to society as soon as possible.

You can support this endeavour through the following web page: http://www.cnio.es/ing/colaborar/super-amigo.asp