Researcher Sonia Laín, from Karolinska Institutet, to have sabbatical stay at the CNIO supported by the Jesús Serra Foundation’s Visiting Researchers Programme 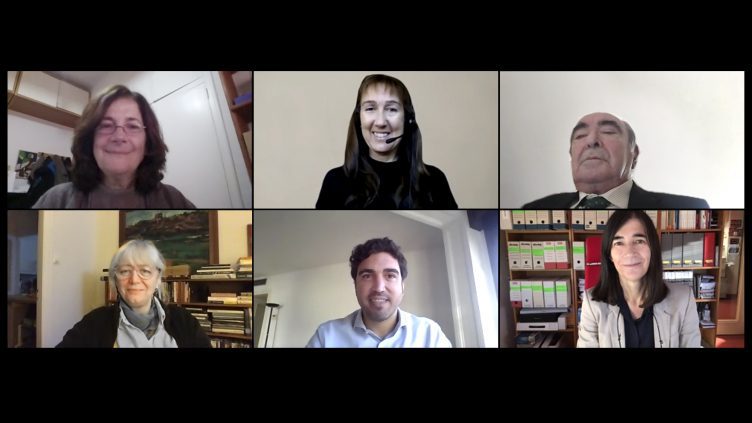 Laín’s interactions with a number of CNIO research teams have made it possible for her to assess cancer drug development projects and pursue two new lines of research: KRAS mutations in cancer and the effects of some inhibitors on metabolism

“Discussing ideas with outstanding international researchers such as Sonia Laín fuels and improves research at the CNIO,” says CNIO Director María A. Blasco

Cooperation between the Jesús Serra Foundation and CNIO began in 2009. Once a year, the CNIO welcomes an outstanding visiting professor for a few months’ sabbatical stay. This strengthens the ties between the host centre and the research team of which the visiting scholar is a member and leads to new lines of research as a result of the exchange of knowledge and ideas.

Sonia Laín completed postgraduate studies at Centro de Biología Molecular, Madrid; got an EMBO grant to work at the University of Gothenburg, Sweden; and was group leader at the University of Dundee, Scotland, where she was appointed Senior Lecturer. Between 2015 and 2018, she conducted research at the Science for Life Laboratory, in Sweden, where she carried out studies on new drugs in collaboration with the Chemical Biology Consortium Sweden and the Drug Discovery and Development Platform. Currently, Dr Laín is a Professor of Molecular Cancer Pharmacology at the Microbiology, Tumour and Cell Biology Department in Karolinska Institutet, Stockholm.

Dr Laín’s main achievements are the description of the first helicase codified by an ARN virus, the identification of the cAMP signalling pathway as Epstein Barr virus oncogene modulator, and the demonstration that the p53 tumour suppressor protein can be activated by a molecule that inhibits the nucleus-to-cytoplasm transport. This finding, and the creation of a company in the US that develops this type of inhibitor, led her to undertake projects in her lab focusing on cancer drug discovery. In the past few years, her team have been working on the discovery and elucidation of the mechanisms of action of compounds that might be used as anticancer agents.

Dr Laín’s main research focus now is the discovery and study of ribonucleotide synthesis inhibitors, especially dihydroorotate dehydrogenase (DHODH) inhibitors. One of the inhibitors identified in her lab could be used in the treatment of some types of leukaemia and childhood cancer. At present, these molecules are being developed and assessed by an international company.

Dr Laín has already taken part in the Experimental Therapeutics Programme at CNIO, led by Joaquín Pastor. “It’s been a fruitful experience, since it allowed me to compare and contrast our anticancer drug studies,” said the researcher. In addition, her work with other groups has led to the development of two lines of research, with the Experimental Oncology Group, headed by Mariano Barbacid, and the Growth Factors, Nutrients and Cancer Group, led by Nabil Djouder.

Laín and Barbacid got funding to study the potential of compounds that might be used in combination in the treatment of cancers with KRAS mutation – the KRAS oncogene is involved in at least one fifth of all human cancers. “In addition, Nabil Djouder is getting ready to begin work on the effects of DHODH inhibitors on metabolism,” says Dr Laín.

“It is a great honour for me to be a visiting researcher at the CNIO.” “I would like to thank the Director and the Jesús Serra Foundation for giving me this excellent opportunity. The CNIO is an internationally-renowned research centre and its scientists publish outstanding scientific papers. Needless to say, it is an extraordinary place to carry out cancer research. In my opinion, the CNIO makes very efficient, sensible and fast use of resources.”

“The Jesús Serra Foundation’s Visiting Researchers Programme is very important to cement ties between researchers and research institutes around the world,” says CNIO Director Maria A. Blasco. “Discussing ideas with outstanding international researchers such as Sonia Laín fuels and improves research at the CNIO,” she adds.

According to the President of the Jesús Serra Foundation, Federico Halpern, this type of cooperation is the result of the foundation’s commitment to scientific research: “Cooperation between top Spanish research institutes like the CNIO and other international scientific research centres has contributed to building synergies and promoting research in such relevant fields as the fight against cancer.”

The Jesús Serra Foundation is a private non-for-profit organisation established as a tribute to Jesús Serra Santamans, founder of Grupo Catalana Occidente and a supporter of humanitarian values for the benefit of society. Committed to social responsibility, the Foundation promotes a large number of research, education and business projects, social work, sport and cultural activities, and other initiatives.

The CNIO is a Spanish public institution dedicated to the research, diagnosis and treatment of cancer, and affiliated to the Carlos III Institute of Health (Ministry of Science, Innovation and Universities). It is one of the 10 leading cancer research centres in the world (Scimago Institutions Rankings World Report; Nature Index) and covers the entire R&D and Innovation spectrum, from basic research to the clinic, with a view to transferring the results quickly and efficiently to the National Health System and to the pharmaceutical and biotechnology market.

The CNIO has an Experimental Therapeutics Program that covers the initial stages of the development of drugs directed against the therapeutic targets its scientists are working on. Some of the CNIO’s compounds have been licensed to international pharmaceutical companies. In addition, the CNIO is actively involved in ‘open innovation’ programs of international pharmaceutical companies, which has resulted in an influx of more than 25 million euros into the CNIO in the past 6 years. Finally, three spin-off companies have emerged from the CNIO, which have also allowed patients to benefit from the centre’s developments. These data reflect the Institution’s commitment to innovation and technology transfer and illustrate the importance of public-private collaboration for the advancement in the diagnosis and treatment of disease.

Moreover, the CNIO strives to bring science closer to society through initiatives like CNIO Arte, which gathers scientists and artists in the creation of a work of art based on scientific research, or CNIO Friends, a philanthropic platform where individuals, companies and organisations can make contributions to help cancer research at the Centre. The funds raised have facilitated the establishment of a competitive International ‘CNIO Friends’ Post-Doctoral Contract Programme to engage research talent.