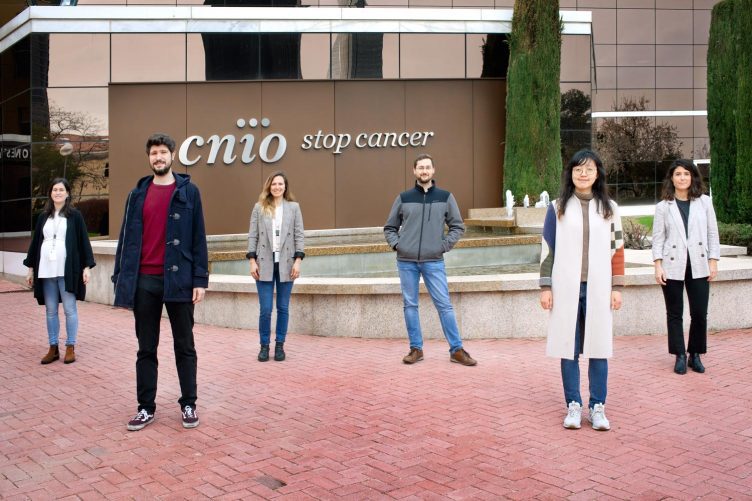 María José Andreu, Giuseppe Bosso, Sofía Cabezudo, Eunjeong Kim, Magdalena Leal and Sergio Muñoz will do research into Ewing sarcoma, the protection of telomeres (which is key in cancer and ageing), a molecular pathway that is over-activated in a number of tumours, liver cancer, melanoma, and DNA replication, respectively

CNIO Friends has a large number of donors, including individuals, foundations and companies who have given away over 2.2 million Euro to cancer research projects so far, 800,000 of which were donated only in the past year

This year’s call is offering the highest number of positions since the initiative was launched. The winners were selected from applicants mostly from Europe and the Americas.

The winners of the two-year contracts are:

Magdalena Leal, Doctor in Molecular Biology, Biomedicine and Clinical Research from the University of Seville. She is joining the Melanoma Group, led by Marisol Soengas, where she will study how melanoma works “from a distance” before metastasis sets in and how it eludes detection by the immune system. Specifically, she will analyse the role of the midkine protein in the bone marrow. Her contract is fully funded by the Humanismo y Ciencia Foundation.

María José Andreu, Doctor from Universitat de Barcelona. She will join the Chromosome Dynamics Group, headed by Ana Losada, to study how mutations in STAG2 result in Ewing sarcoma metastasis. Ewing sarcoma is a type of bone cancer – the second most common primary sarcoma in children. The goal of her study is to improve the clinical care and the evolution of metastatic patients. Dr Andreu’s contract is fully financed by an international private foundation.

Giuseppe Bosso, Doctor from Sapienza-Università di Roma (Italy). As a member of the Telomeres and Telomerase Group, led by Maria A. Blasco, he will try to identify the pathways and proteins required to protect telomeres, that is, the DNA-protein structures that protect the ends of each chromosome. Telomeres shorten with age and play a key role in ageing-associated disorders, like cancer, pulmonary fibrosis and cardiovascular disease, among others.

Sofía Cabezudo, Doctor in Molecular Biosciences from the Autonomous University of Madrid. As part of the Macromolecular Complexes in DNA Damage Response Group, headed by Óscar Llorca, she will search for novel strategies to stop tumour progression, targeting the mTOR signalling pathway, which regulates cell metabolism and growth. Aberrant mTOR signalling is commonly observed in various types of cancer.

Kim Eunjeong, Doctor from the Pohang University of Science and Technology (South Korea). In the Growth Factors, Nutrients and Cancer Group, led by Nabil Djouder, she will study the relationship between cirrhosis and hepatocellular carcinoma. Her goal is to try and find novel treatments for patients with liver cancer.

Sergio Muñoz, Doctor in Molecular Biosciences from the Autonomous University of Madrid. He will work in the DNA Replication Group, led by Juan Méndez, studying how cells regulate the initiation of DNA replication to ensure the genome is segregated equally to the daughter cells. Dr Muñoz’s goal is to understand how inexact replication leads to genetic instability, a phenomenon that is often associated with various types of cancer.

Donations that turn into research

The CNIO Friends initiative was launched by CNIO in late 2014, with the aim of raising funds for research, as well as attracting talented researchers to the CNIO, an internationally renowned cancer research centre. With over 2.2 million Euro donated so far by over 1,900 donors, including individuals, foundations and companies, the initiative has celebrated its sixth anniversary. Only in the past year, a total 800,000 Euro were donated. Moreover, in the past months, there was an increase in large donations, whereby foundations and companies enter into cooperation agreements with the CNIO to fully fund individual researchers’ contracts.

Thanks to CNIO Friends, the CNIO has been able to hire 19 researchers – including the six scientists in the latest call – through the CNIO Friends International Postdoctoral Contract Programme, a highly competitive grant program open to scientists from any country. They have explored a wide range of fields, from childhood brain cancer to the use of big data and nanotechnology in cancer research. They were all given the chance of a postdoctoral stay in a centre of scientific excellence like the CNIO; conversely, the CNIO has benefitted from their great scientific talent.

Any individual, business or association can support cancer research and make their contribution to the CNIO efforts to make progress in the understanding of cancer, thus contributing to the advancement of knowledge of this group of diseases and to the search for new treatments. Becoming a CNIO Friend is really easy at the CNIO website. Moreover, all donations qualify for significant tax deductions.

Donations can also be made through bequests and estates. In six years, CNIO Friends has received more than 1.1 million Euro from people who decided to include the CNIO in their wills, so that their estates would go to research that help find early diagnostic techniques and novel treatments for cancer.

To mark World Cancer Day, on February 4, the CNIO has launched #CNIOStopCancer, a campaign encouraging people to donate to support cancer research, featuring mountaineer Edurne Pasaban, actor Carlos Hipólito, and Trial and Enduro champion Laia Sanz on the importance of cancer research and the purpose of the CNIO Friends initiative.