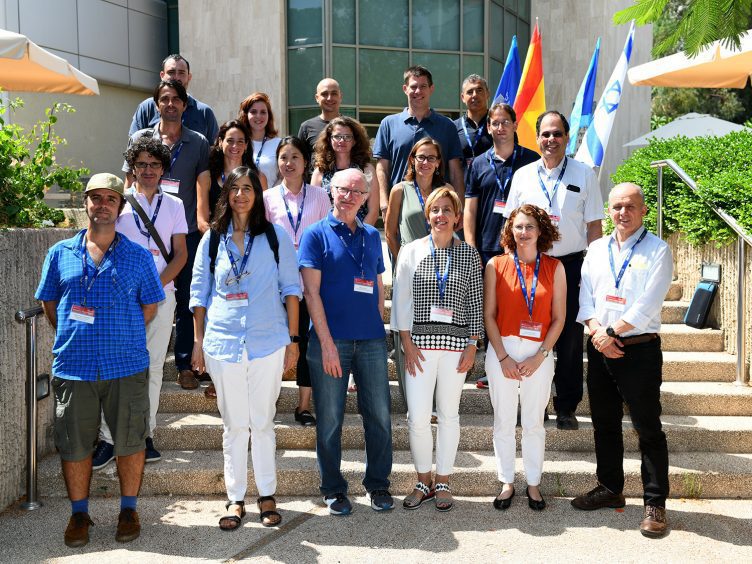 Held at the Weizmann Institute of Science in Rehovot, Israel, the event was attended by some of the top scientists from this institution and CNIO

It is the second event organised by CNIO, the Weizmann Institute of Science and Ramón Areces Foundation since they agreed two years ago to collaborate together to advance cancer prevention and treatment

At the scientific event, novel combination therapies and targets for breast or ovarian cancer were presented, as well as the progress of a joint research study on the most aggressive type of skin cancer and the metastases that result from it

On 4 and 5 September, the Spanish National Cancer Research Centre (CNIO) and the Moross Integrated Cancer Center (MICC) of the Weizmann Institute of Science held in Rehovot, Israel, an international symposium on the newest approaches in cancer research and the development of new joint projects. This was the second of the biannual events that take place alternately in Spain and Israel following a cooperation strategy agreed in 2017 by CNIO and the Weizmann Institute of Science – two of the world’s top cancer research centres –, and Ramón Areces Foundation.

Some of the most renowned scientists from the two institutions participated in the symposium. In the words of CNIO Director Maria Blasco, “this event is of the utmost importance to build synergies between two leading research institutions, and it fosters international cooperation in the fight against cancer.” MICC Director Moshe Oren said that “cancer is a global problem. The key to success in the fight against cancer is global cooperation and collaboration. The alliance between our two centers of excellence in cancer research has potential to contribute significantly to these global efforts.”

Raimundo Pérez-Hernández y Torra, Director of Ramón Areces Foundation, highlighted “the importance of establishing strong ties between eminent scientists from Spain and Israel who are committed to finding new ways to prevent and cure cancer.”

At the two-day meeting, novel combination therapies and targets that help improve cancer diagnosis and treatment were presented by Maria Blasco – who delivered a keynote speech on the role of telomeres in cancer cells – and Eva González from the CNIO, and Rony Seger and Ziv Shulman from the Weizmann Institute of Science. Other speakers discussed a number of innovative technologies, for instance, the methods developed by CNIO researcher Óscar Llorca in the field of cryogenic electron microscopy – a technology that won the Nobel Prize in Chemistry 2017. Efrat Shema and Amos Tanay of the Weizmann Institute of Science presented their work on real-time single-molecule and single-cell analysis in epigenomics and tumour progression, respectively.

During the two-day event, the latest results of the joint project ‘Heterogeneity underlying melanoma metastasis and resistance to immune checkpoint inhibitors’, co-developed by Marisol Soengas from CNIO and Yardena Samuels from the Weizmann I of Science, were announced. The goal of this three-year project, funded by Ramón Areces Foundation, is to explain why melanoma develops malignant metastases throughout the body from a primary tumour only a little over 1 millimetre in thickness. Furthermore, the population of cells that make up these types of cancer are considerably heterogeneous, a characteristic that affects the response to treatments, including immunotherapy. Soengas and Samuels are investigating new biomarkers that will help doctors predict the patients who will respond to immunomodulators used in clinical practice.

Other researchers who participated in the meeting include Óscar Fernández-Capetillo, Marcos Malumbres, Solip Park and Iván Plaza, from CNIO, and Itay Tirosh, Sima Lev, Idit Shachar and Zvi Livneh, from the Weizmann Institute of Science.

CNIO is a Spanish public institution – ascribed to the National Institute of Health Carlos III (Ministry of Science, Innovation and Universities) – dedicated to the research, diagnosis, and treatment of cancer. It is among the 10 leading cancer research centres in the world (Scimago Report; Nature Index) and caters for the entire R&D roadmap, from basic research to clinical tests, with a view to transferring the results obtained quickly and efficiently to the Health Care System and to the pharmaceutical and biotechnology markets.

About the Weizmann Institute of Science

The Weizmann Institute of Science in Rehovot, Israel, is one of the world’s top-ranking multidisciplinary research institutions. Noted for its wide-ranging exploration of the natural and exact sciences, the Institute is home to scientists, students, technicians and supporting staff. Institute research efforts include the search for new ways of fighting disease and hunger, examining leading questions in mathematics and computer science, probing the physics of matter and the universe, creating novel materials and developing new strategies for protecting the environment.

Since 1976, Ramón Areces Foundation has had among its primary goals to support the work of young scientists in Spain, make known the scientific and technological advancements achieved in other countries, and disseminate the work of Spanish scientists abroad.