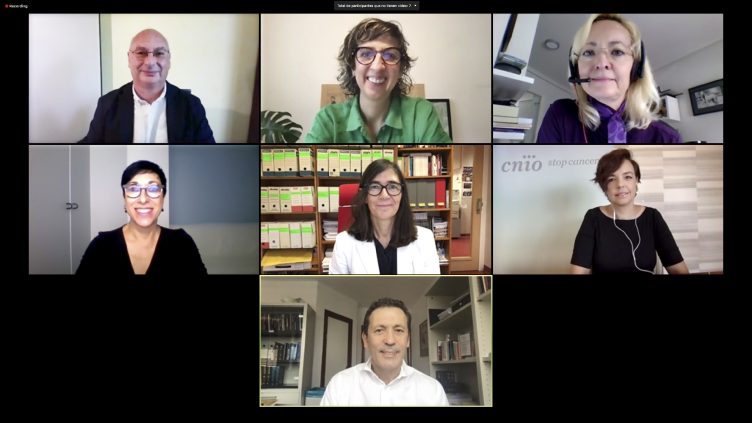 In his keynote address, Francis Mojica, the scientist who discovered the CRISPR mechanism, explained how gene editing can be used in treatments for several types of cancer

“While spending on scientific research rose slightly in the past years, it has not reached the levels before the economic crisis, back in 2010. Cuts in science spending caused a lot of harm and reduced our talent recruiting capabilities,” said CNIO Director and Head of the Telomeres and Telomerase Group, Maria Blasco.

“Citizens should voice their dissatisfaction about this situation. We must make political leaders fulfil their promises,” said Luis Paz-Ares, Head of the H12O-CNIO Lung Cancer Clinical Research Unit and Head of the Medical Oncology Service at University Hospital 12 de Octubre. “Spain spends very little in support of cancer research as compared to neighbouring countries. It spends half of France’s budget for science and one third of Germany’s. Cancer is a public health issue that affects a large number of families.”

At the meeting, the need to “speed up some processes” was also brought forward. “A long time passes from scientific discoveries to drug development. Scientific research is always way ahead of clinical applications, and this is one of our urgent challenges,” said Maria Blasco.

In addition, with the Covid-19 pandemic, things have worsened. “Clinical trials were delayed and cancer diagnosis dropped by half in several countries,” claimed Paz-Ares.

Along the same lines, Maria Blasco talked about the “fragility of human civilization”. “Some types of cancer,” she added, “are among the diseases people are most afraid of. Cancer poses a global challenge. Cancer incidence will rise over the next decades due to the ageing of the world’s population.”

Maria Blasco highlighted the importance of research in tumour metastasis and the need to speed up basic research translation to clinical practice, that is, to patients.

“We, scientists, need support from society,” said Sandra Rodríguez-Perales, who added, “the main obstacles we are facing are lack of funding and support for young researchers.”

In his keynote address, Francis Mojica explained how gene editing can be a powerful tool for cancer treatment. “For instance, it can be used to identify therapeutic targets. With CRISPR technology, you can screen the entire genome. There are 20,000 genes encoding for proteins. And there are studies aimed at modifying genes to see what happens, which genes are involved in, say, the development of leukaemia or 30 different types of cancer. And we can see what happens when we inhibit gene functions.”

A disease of genetic origin, cancer can greatly benefit from this technology. “Ongoing improvements will ensure an increasingly sophisticated research on cancer and will open up paths toward precision medicine to target specific tumour cells,” explained Mojica.

CRISPR can also be useful to develop animal models for research. “CRISPR-modified cells are transferred into worms or mice to study cancer progression and find its weak spots,” said Mojica.

Regarding therapies, Mojica said that using the CRISPR tool “we supressed a tumour. We used a variant named CRISPRa, which activates tumour suppression genes”, he added.

Mojica also explained how “these mechanisms facilitate the study of living creatures in ways that were unforeseen in the pre-CRISPR era.” “In addition,” he explained, “they enable us to solve problems and answer questions we could not halve solved or answered before.”

As to CRISPR applications, Professor Mojica said it can be used in plants to “improve the development of plant-derived anticancer agents or to prevent the use of carcinogens from plants.” Technologies such as CRISPR are of great interest in disease prevention. It can be used to produce tobacco with lower nicotine content.

According to Professor Mojica, the CRISPR gene editing tool can be improved yet. “There is still room for improvement in the efficacy and robustness of this tool, and in its safety as well.”

María Luisa Villafranca, President of Rosae Association, an association of breast cancer patients, used a brief phrase to highlight the importance of research – “Research is life.” “Since I was diagnosed with breast cancer 20 years ago, there has been major advances in cancer treatment. Today, treatments are personalised, adapted to every tumour. We must support research. We should not need a pandemic to realise the immense importance of scientific research.”

Regarding advances in cancer research and treatments, Luis Paz-Ares mentioned that scientists have helped increase the survival rates of patients with cancer. “The five-year survival rate was 30% a few years ago. Today, it is over 55% in Spain. This is the result of scientific findings and advances, of our ability to translate them into diagnostic methods.”

Ranked among the top-10 cancer research centres worldwide (Scimago Report; Nature Index), the CNIO covers the entire R&D+i range, from basic research to drug finding, and it cooperates with hospitals in clinical trials.

More than 450 scientists work at CNIO on the efficient and rapid application of their findings in the National Health System and the pharmaceutical and biotech industries. Recent advances have been made in research on metastasis thanks to the integration of several groups focusing on this area of cancer research. This is an important step forward, as it is estimated that metastasis is responsible for about 90% of cancer deaths. CNIO has fostered multidisciplinary approaches, recruiting computational experts that provide a comprehensive overview of cancer’s complexity and suggest novel therapeutic hypotheses.

The CNIO has set the goal to bring science closer to society through initiatives like CNIO Arte, where scientists and artists come together to make a work of art inspired by science, or CNIO Friends, a philanthropic platform that supports work being done at the CNIO. CNIO Friends contributed to the launch of an International Contract Programme that attracts talented scientists to carry out their research projects at CNIO.