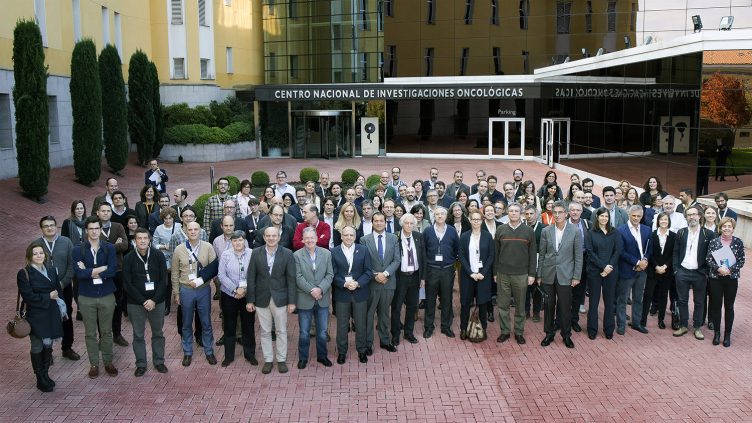 Representatives of the PSOE, PP, Podemos, Ciudadanos and PdCat political parties agree on the short-term implementation of certain measures to cut through red tape and to improve the science and innovation system.

The meeting took place at the “100xciencia.3: Bridging science and society” congress, organised jointly by the SOMM alliance and the CNIO.

The event also featured a keynote conference by the Nobel Prize for Chemistry Robert Huber, as well as debates on the relationship between science and society.

Representatives from member institutions of the Severo Ochoa and María de Maeztu alliance (SOMMa), which encompasses the 41 Severo Ochoa and María de Maeztu Centres and Units of Excellence, – gathered on November 15th at the Spanish National Cancer Research Centre (CNIO) for the 100xCiencia.3: Bridging science and society Congress. In its third edition – the first since the foundation of this Alliance in October 2017 – 100xCiencia focused on the importance of the participation of society in science.

The Congress was officially opened by Maria A. Blasco, the Director of the CNIO, Rafael Rodrigo, the Secretary General for Scientific Policy of the Ministry of Science, Innovation and Universities, and Luis Serrano, Chairman of SOMMa and Director of the Centre for Genomic Regulation (CRG).

“One of the government’s objectives is to stabilise the science system, improve its management and set realistic terms and deadlines”, declared the Secretary-General, Rafael Rodrigo, who also added that “the time has come to deploy the Law of Science. It is time to act”.

“There are several initiatives that do not require of more budget commitments, and that could be implemented in a short time frame if they are backed by political will. SOMMa is proposing to work to make this come true, and thus be able to sustain science in Spain”, said Luis Serrano in his address. Serrano also asserted: “While it is true that SOMMa’s members have managed to increase their capacity to obtain external funding, strike up international collaborations and attract talent, the alliance also works to the benefit of the entire R&D&I system, because our initiatives, proposals and efforts impact all the stakeholders in the system, regardless of whether they are members of the alliance or not”.

Maria A. Blasco echoed this assertion: “With more than 40 Severo Ochoa Centres and María de Maeztu Units, our country has created a network of scientific excellence that has the power to transform Spanish research, and is building bridges with society, politics and the business ecosystem”.

Representatives from the science commission of the Spanish House of Commons debated on the strong and weak points of scientific policy in our country. The ‘Scientists and science policy together for society’ round table featured the participation of Ferran Bel (PDeCat), Juan Bravo (PP), María González Veracruz (PSOE), María Rosa Martínez Rodríguez (Podemos) and Susana Solís (Ciudadanos), who agreed that short-term measures are called for in order to cut through red tape and to improve the science and innovation system. The debate was moderated by Nuño Domínguez, a journalist from the El País daily’s Materia section.

Indeed, in March this year, the alliance presented the ‘SOMMa Report: actions required to safeguard the competitiveness of science’ document, which called upon politicians in Spain to overcome the bureaucratic shackles that hamper the country’s R&D&I organisations. For example, the lack of harmonised criteria in matters of inspections by the Tax Authorities regarding the application of VAT to research institutions has led to major legal uncertainty. Other outstanding issues are the calling for urgent measures for the stabilisation of employees at research institutions and the effective deployment of the Law of Science, as well as to take into account the industry’s specific particularities.

To this regard, in the course of the round table, all the political parties were unanimous in their commitment to overcome these administrative barriers, and they even suggested that, for example, the issue of the VAT applied to science institutions could be solved within a matter of two or three weeks.

The event also featured the presence of Robert Huber, the Nobel Prize for Chemistry, with his keynote speech “The century of vision: Protein structures for drug research”. Huber was awarded the Nobel Prize in 1988 for the study and characterisation of a protein that is highly relevant to photosynthesis. Since 2005, his career as a researcher has unfolded at the Center of Medical Biotechnology of the University of Duisbuerg-Essen (Germany).

The congress also included the debating and sharing of experiences related to the participation of citizens in the scientific process and the relationship between science and society.

The round table about ‘The media as channeling agents of science’ also featured prominent journalists from our country, such as Patricia Fernández de Lis (Director of Materia, El País), Pampa García Molina (Coordinator and Editor in Chief of the SINC Agency), Noemí Gómez (scientific journalist for EFE), Antonio Martínez Ron (journalist and scientific reporter at Naukas) and Mónica Salomone (scientific journalist). Most of the participants underlined the fact that while scientific journalism helps to inform society, it must always do so from a critical standpoint, and even question the scientific process.  The journalists also asserted that what makes a scientific news item relevant is not merely its scientific interest, but also its social impact, or other related considerations beyond the scientific results themselves. The round table was moderated by Luis Martínez Otero, a researcher from the Institute of Neurosciences of Alicante.

The session on the ‘Scientific Empowerment of Society’, led by Rosina Malagrida, Head of the Living Lab for Health IrsiCaixa, addressed the importance of empowering different social stakeholders in matters of science. The participants in this debate were Maria A. Blasco, María Gálvez Sierra, Director of the Patients Organisation Platform, Paloma Domingo, Director of the Spanish Foundation for Science and Technology (FECYT) and Ignasi López Verdeguer, Director of the Science Department of “la Caixa” Social Work.

The SOMM alliance’s research centres and units had the opportunity to present some of their most outstanding initiatives in scientific education and in citizen participation in science, which proved to be inspirational examples, further promoting the exchange of good practices, one of the missions of the alliance.

About the SOMM alliance

The Severo Ochoa and María de Maeztu excellence accreditations are the ultimate institutional acknowledgement of scientific research in Spain, and the sites are selected by an international assessment committee. These sites straddle virtually all areas of knowledge, ranging from physics and mathematics through to environmental sciences and biomedicine, also taking in disciplines from the humanities.

The SOMMa network was created in 2017 with the objectives of increasing the visibility of science in Spain at home and abroad; promoting the exchange of knowledge, technology and good practice among its members, the international scientific community and all the main stakeholders; collaborating with the other research sites in Spain in order to bolster the R&D&I system and to have a say in Spanish and European scientific policies.