Pepa Bueno: “Newsrooms are swarming with women, but editorial boards are still male-dominated” 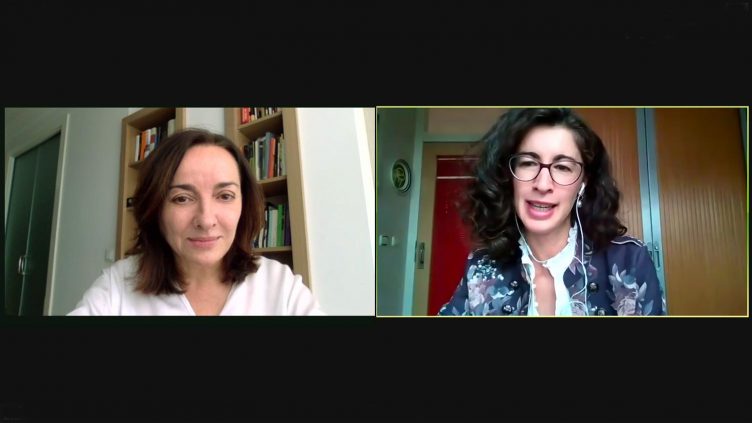 “We are witnessing a reversion in physical appearance standards by TV channels recruiting female applicants,” the journalist said

The Director of Cadena SER’s 'Hora 25' delivered a speech today, as part of the series of seminars organised by the Women in Science Office at the CNIO

“The current context can be briefly defined by saying the names of the only two female general managers in national media.” These were the opening words of the speech delivered on Zoom by Pepa Bueno, journalist and Director of Cadena SER’s Hora 25. Her speech, titled ‘Journalism and Feminism,’ was part of the series of seminars organised by the Women in Science Office (WISE) at the Spanish National Cancer Research Centre (CNIO). “Newsrooms are swarming with women, but editorial boards are still male-dominated,” claimed Bueno. She discussed the women’s fight for equal rights from two different perspectives, from within (how it has affected journalism) and from without (its impact on society).

Talking about her professional experience, Pepa Bueno said she joined “TV news shows where no women had been before.” One such newscast was TVE’s Telediario, of whose evening show she was the first-ever female host. Also, she was the first woman to host Cadena SER’s Hoy por hoy. “TVE is a state-owned public-service broadcaster and Cadena SER is a privately owned TV network. Both were prime-time shows where no women had been recruited as hosts before,” Bueno remarked.

“They would say, based on no scientific evidence, that women were no good for such jobs. They were very popular newscasts, with political leverage and high salaries,” she added. “Ultimately, the only reason for not hiring women was that there had been no female hosts before.”

The director of Hora 25 referred to the “physical attractiveness tyranny” imposed on women in audio-visual media. “We are witnessing a reversion in physical appearance requirements by TV channels hiring women, who must be tall, slim, with long hair…” According to Bueno, there was more diversity a few decades ago. Another “restriction affecting women is age discrimination,” she said. “While for men in public office, age is an asset, synonymous with reliability and authority, women like Esperanza Aguirre or Manuela Carmena are considered too old for their jobs.”

According to Bueno, gender inequality in the media is more evident when it comes to opinion journalism: “Women can hardly make their voices heard, while men express their opinions openly. Women must talk quickly and be brief, because if they don’t, somebody else will steal the floor”.

As to the impact on society, Bueno mentioned the fact that stories on gender violence would appear in the crime section of daily newspapers until the late 1990s, when Ana Orantes was killed by her ex-husband. He tied her to a chair and burned her alive two weeks after she appeared on a Canal Sur TV show to talk about the violence she had suffered in her marriage. “Ana was murdered on the 17th of December 1997. Her story radically changed the way the Spanish society judged gender violence. RTVE set out rules to cover gender issues, and soon all the media adopted similar rules.”

A major shift, however, took place when, in the mid-2000, young women turned to feminism and took up the fight for gender equality where the feminists of the Spanish transition to democracy had left it. “In the newsrooms, this was reflected in the change from publishing gender issues occasionally to introducing a gender perspective across all sections. This change was coincidental with the presence of women in executive and middle management positions.”

“Feminism and journalism have something in common: both look at the world with critical eyes,” Bueno remarked.

In today’s world, social media are one of the battlefields where the gender fight is fought. “In social media, public women are scrutinised all the time, and people post negative comments they would not dare make in face-to-face situations. It happens every day, and it is vile,” she complained.

Finally, when CNIO Director Maria A. Blasco asked how long the road was to gender equality in media boards, Bueno cited a World Economic Forum survey, according to which, without gender equality policies, it would take the next 100 years to attain 50/50 gender parity.