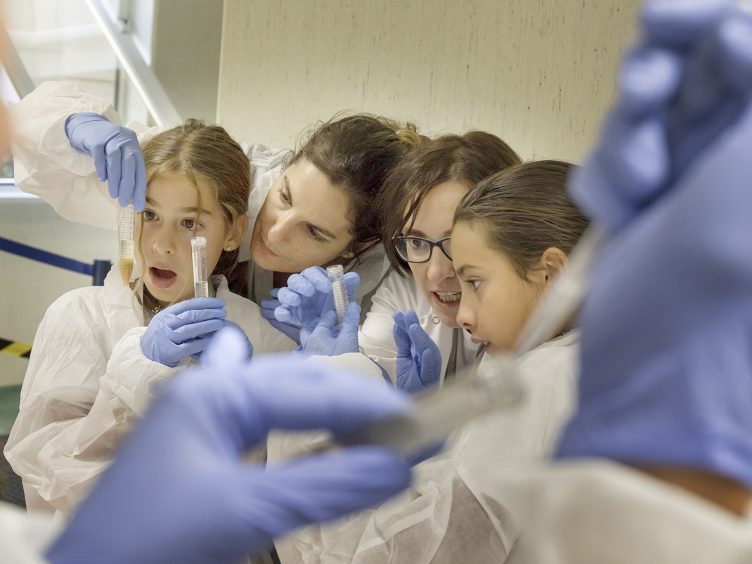 This is the ninth edition of this initiative, which every year brings European citizens together with the best researchers in the country to talk about the reality of a key group in contributing towards society´s development

CNIO will be welcoming 200 citizens of all ages who will take part in an experiment, discover why research is the only way to beat cancer, and chat with researchers in a 'speed dating' activity

“Discover”, “lab coat”, “bacteria”, “cells”, “pipet”, “chemistry”, “laboratory”… these are just a few of the words that spring into the minds of the youngest participants at the European Researchers’ Night, when asked to think about someone who works in science. But also “fun”, “cool”, “awesome”, “interesting”, “helps people”… These were the words recorded in the questionnaires filled in after the ‘Meet the scientists, be a scientist!’ activity held every year on this evening at the Spanish Cancer Research Centre (CNIO). At this ninth edition of the event, the Centre will once again open its doors to show how to do an experiment with products that are available to everyone: tomato, salt, pineapple juice, dishwasher, ethanol… ingredients that, on Friday 28 September, between 5pm and 11pm, 200 people will use to learn how to extract the DNA from a living being.

At this event, CNIO, working together with 23 other institutions based in Madrid, will show the reality of a key collective in the development of society. Because, as well as carrying out an experiment, visitors can also discover why research is the only path to beat cancer, and will chat with researchers in a ‘speed dating’ activity, to find out more about their scientific careers, but also to ask them personal questions.

As Jorge Martínez Torrecuadrada, from the Crystallography and Protein Engineering Unit, and coordinator of this activity at the CNIO, explains: “it’s important for people to get to know researchers and find out about their day-to-day work. Usually they are seen as being very distant and unavailable, and at these events we can show that this is not true, and that someone with a vocation, through hard work, commitment and determination, can become a good scientist”.

The interest expressed by citizens and scientists themselves in this event is clear from two record figures. Firstly, the event was fully booked in less than an hour. And secondly, by the number of researchers who have signed up to meet with the participants: 64 scientists, from pre-doctoral students to heads of units, confirming that the commitment to disseminate science and promote the scientific culture is part of CNIO’s core values.

The profile of visitors is already very diverse, with a very wide age range, from 6 to 90 years of age. Torrecuadrada states: “Although our activity is aimed at the general public, it will be particularly enjoyable for senior school students with scientific concerns, as well as for the little ones, whose capacity for amazement and curiosity to discover are infinite”.

Madrid’s European Researchers’ Night is a scientific outreach project that has been taking place simultaneously in 340 European cities since 2005. In the region of Madrid, it is promoted by the Department of Education and Research and coordinated by Fundación madri+d. This project is financed by the European Union as part of the EU Horizon 2020 research and innovation programme, in accordance with subsidy number 818.528.

At CNIO, this activity is part of the centre’s scientific dissemination strategy, channelled fundamentally through the Dean’s Office and the project CNIO & The City.