Home | News | CNIO News | María Casanova-Acebes: “My group at the CNIO will try to prevent the chronicity of cancer”

María Casanova-Acebes: “My group at the CNIO will try to prevent the chronicity of cancer” 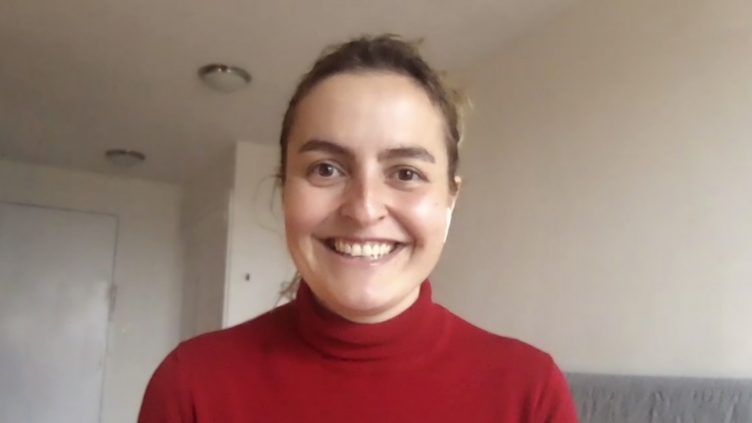 María Casanova-Acebes returns to Spain after her stay in the United States to lead her first research group, the Cancer Immunity Group, at the CNIO

The young scientist, who is specialised in the innate immune system, will try to synchronise the internal clocks of immune cells and tumour cells, which are currently out of sync, in order to overcome an advantage whereby cancer manages to grow by evading our body's defence system

In addition, she will aim to develop a novel immunotherapy strategy focusing on the innate immune system, which can detect metastases before they occur and prevent the chronicity of cancer

In July 2007, biology student María Casanova-Acebes walked for the first time through the doors of the Spanish National Cancer Research Centre (CNIO) to do an internship in the Confocal Microscopy and Flow Cytometry Core Units. Little did she know that more than 10 years later she would be walking through these doors again, but this time to set up her own research group, the Cancer Immunity Group, and to enter a pioneering field: understanding how circadian rhythms have an effect on the immune system and the development of cancer and proposing a novel immunotherapy strategy focused on manipulating the cells of the innate immune system that might be more effective than current approaches (focused on the acquired immune system) and could prevent the chronicity of cancer.

Synchronising the clocks of the immune system and cancer cells

In recent years, we have begun to study how circadian rhythms –the various changes that occur in our body regulated by daily cycles of light and darkness– affect the functioning of the immune system, our internal guard that protects us from disease-causing agents such as viruses and bacteria. “Studies in animal models show that organisms in which these rhythms are disturbed are more susceptible to developing diseases related to a dormant immune system,” explains María Casanova-Acebes.

The young scientist is a specialist in this research area: during her PhD research, she analysed the signalling mechanisms of the cells of the innate immune system, the defences that we are born with, i.e. neutrophils, monocytes and macrophages; these cells are called myeloid cells and are largely generated in the bone marrow. The response of the innate immune system is more immediate but also less sophisticated than that of the acquired immune system, which we develop throughout life and that learns and remembers how to react to specific pathogens – vaccines are a method to induce this latter more specialised response.

“At this stage, I gathered evidence that the innate immune system is strongly influenced by different types of signalling that control circadian rhythms,” says Casanova-Acebes. “There is an internal clock that regulates the myeloid cells at the molecular level and is evolutionarily conserved in all of them, which indicates that it is a very important factor in the carrying out of their functions.”

After obtaining her PhD, she completed two postdoctoral stays in the United States at the Salk Institute (La Jolla, San Diego), and at the Tisch Cancer Institute at Mount Sinai School of Medicine (New York), where she began to link these studies to their potential application in immunotherapy and cancer. “The unique localisation of myeloid cells in tissues places them in the first line of defence to identify tumour cells. “However,” she explains, “tumour cells also have an internal clock that is subject to the circadian rhythms of the tissue they invade, and we believe that they use this to escape recognition by the immune system and thus avoid being eliminated.”

Therefore, one of her aims at the helm of the new CNIO Cancer Immunity Group will be to synchronise both clocks, of cancer cells and immune cells, so that the latter can detect and eliminate the former. “We need to understand how both signals are integrated into their shared environment, i.e. in the organs they inhabit, and thus neutralise the tumour cells’ advantage to grow and evade our defence system.”

Nipping cancer in the bud

Another objective of her team will be to predict where the metastases will form with the help of the innate immune system. The strategy is to confront cancer in its early stages, “as if it were an acute disease,” before the complexity it causes in the body turns it into the chronic disease we know. “I want to act in the early stages when the tissue is less damaged and the inactivation of the acquired system has not yet occurred,” she continues. “It’s a challenging scenario because at first the problem is not all that evident, it’s a matter of looking for the cancer before it develops, but we have the advantage of knowing the decoys that the innate immune system acquires in a pre-pathological scenario in the tissues. This way we could design preventive rather than therapeutic targets because we have a time window for action.”

The more any pathological process advances, the more complex the biological interactions become that take place in the organism. In the case of cancer, “the real problem is not so much the primary tumour itself, which can be eliminated by radiotherapy or chemotherapy in most cases, but rather how it generates cells that are going to invade other organs and produce metastases, which are responsible for 90% of deaths from cancer.”

Current immunotherapy strategies focus on manipulating the acquired immune system, for example by generating T cells that learn to identify and destroy tumours. “I will aim to avoid reaching that stage and act earlier,” the researcher says. “To do so, I will work on the cells of the innate immune system, so that they are the ones that flag the first signs of metastases and neutralise them before they progress.”

Casanova-Acebes has already seen how acting on myeloid cells can help turn a cold tumour –unresponsive to immunotherapy– into a hot one. However, she stresses the temporariness and emphasises the fact that these strategies essentially work in the early stages of the tumour: “When the tumour is already established, they are no longer effective.”

To carry out these projects, her laboratory will work on lung cancer and breast cancer with metastases to the lung and brain. And although her group is a basic research group, she finds it crucial to work close to patients. “This is one of my objectives in this new phase in which I am establishing myself as a group leader,” she asserts. “I want to be closer to the consequences of basic research for the patient, which is why I have collaboration agreements with centres such as Hospital Quirón and Hospital Gregorio Marañón”.

The strategies that María Casanova-Acebes wants to carry out fall within the paradigm of systems biology, an approach to biomedical research that is based on the evidence that biological processes do not occur in isolation but rather constitute interrelated systems, and on which the CNIO has been focusing in recent times.

“Understanding how our immune system works as it relates to cancer is a central theme of cancer research,” says the Centre’s Director, Maria Blasco. “María has made very important contributions in this regard.”

“The CNIO is the cancer research centre par excellence, one of the best in Europe,” concludes María Casanova-Acebes. “The choice was very natural, because of the cutting-edge research it carries out, its facilities and equipment, and because of the amenities when it comes to hiring young researchers. I could not think of a better place to carry out my research.”