The ceremony took place this morning at the Palau de la Generalitat (Government Building) on the occasion of the celebration of the Day of the Valencian Community. All the members of the Valencian Government were present, including the President, Ximo Puig, who emphasised the values of the winning individuals and their entities. Maria Blasco, Director of the Spanish National Cancer Research Centre (CNIO) received the Award for Scientific Merit.

Maria A. Blasco is a molecular biologist dedicated to studying telomeres and telomerase, a field in which she has been a pioneer in demonstrating their role in cancer and ageing. She has been the director of the CNIO (Madrid) since 2011. Blasco has published more than 240 articles in some of the most prestigious journals, and has an h-index of 76. She has received numerous awards for her work in the field of research, including the Josef Steiner Cancer Research Award, the Körber European Science Award, the Rey Jaime I Prize for Research, the EMBO Gold Medal Award, and the Santiago Ramón y Cajal National Biology Award. In 2014, she was granted an honorary doctorate from the Carlos III University of Madrid, and at the beginning of 2017, by the University of Alicante.

The Award for Cultural Merit went, on this occasion, to:  the artist Monjales, the author Didin Puig Grau; the artist Enrique Arenós, Quique; the Confucius Institute of the Universitat de València; and the artist, printmaker, and draughtsman, Pepe Azorín. The Award for Business and Social Merit has been awarded to: the first president and co-founder of the Valencian Association of Entrepreneurs (AVE), Silvino Navarro; the entrepreneur José Vicente González; and the telecommunications engineer, Nuria Oliver, who visited the CNIO a few months ago as a guest lecturer at our Distinguished Seminars series.

In addition, the Consell has decided to grant the Award of Actions in Favour of Equality and a more Inclusive Society to the civil rights activist and advocate, Amparo Moreno Vaño and to the Valencian Coordinator of NGOs for Development. With regard to the Award for Sport, the winners this year are: the professional “pilota valenciana” player, Antoni Reig Ventura, ‘Rovellet’; the football player, Ruth García García; the athlete and weightlifting coach, Emilio Estarlik; and the international athlete, Marta Esteban. Finally, Amado Granell, who established the Valencian Regional House in Paris 70 years ago, has received the Award for Ambassador of the Comunitat Valenciana.

On behalf of all the prize winners, the professor of Ethics and Political Philosophy, Adela Cortina, has expressed their gratitude for these recognitions, and has asserted the need to cultivate “an ethics of cordial reasoning” and to create synergies between the civil, political, and economic spheres in order to deal with the “urgent” problems affecting the 21st century. 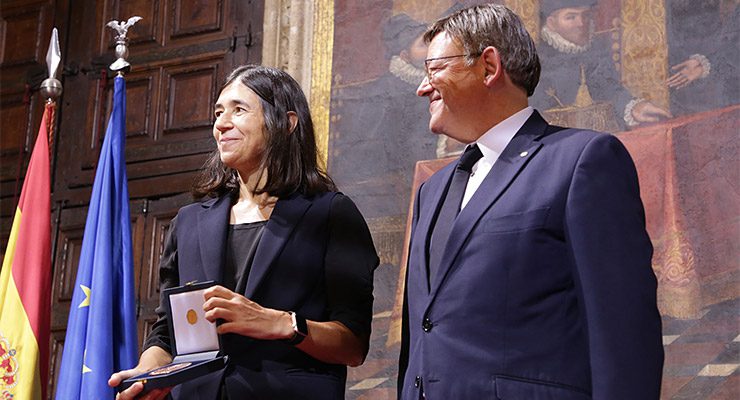 Ximo Puig, president of the Valencian Goverment, presented the award to Maria Blasco.