Manuel Serrano, Director of the Molecular Oncology Programme at the Spanish National Cancer Research Centre (CNIO), has been awarded with the Royal Academy of Medicine (RAMN) 2014 Award, becoming a Corresponding Member of the institution.

His designation was announced during the opening ceremony of the academic year at the RAMN. Professor Joaquín Poch, the President of the Academy, recognised Manuel Serrano as one of the most important scientists in Spain.

Serrano has attained international recognition as a leading figure in the field of tumour suppression. As well as having identified and characterised p16, a key gene in the fight against cancer, Serrano also described cellular senescence as one of the main anticancer response mechanisms in cells.

The group led by Serrano pioneered the development of genetically modified mice, designed to have an increased resistance to cancer. In recent years, new research lines have been launched to study metabolism and its relationship to ageing, as well as cell reprogramming. His group has been the first to show that it is possible to reprogramme cells within the organism to reach a pluripotent?like state, a discovery that was chosen as one of Notable Advances of 2013 by the journal Nature Medicine. 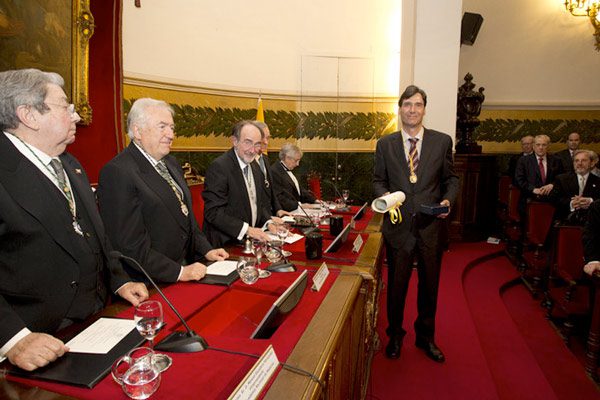 The researcher Manuel Serrano during the ceremony. /CNIO