The award ceremony will be held tomorrow during the XLV Jiménez Díaz Memorial Lecture, which is organised by the Conchita Rábago Foundation to award leading figures in the fields of medicine and research

The Director of the Molecular Oncology Programme at the Spanish National Cancer Research Centre (CNIO), Manuel Serrano, will receive the prestigious Jiménez Díaz Award tomorrow in the Jiménez Díaz Foundation’s Aula Magna, in recognition of “his extensive research career and for his contributions to the field of tumour suppression and the generation of animal models for the greater understanding of cancer”, according to the jury.

Since the Conchita Rábago Foundation was created in 1969, the Jímenez Díaz Distinction Award has been given to 13 Nobel Laureates in Medicine and 6 winners of the Príncipe de Asturias Prize. Amongst the winners are Severo Ochoa, Mariano Barbacid, Joan Massagué, Margarita Salas, Craig Venter and Francis Collins.

Manuel Serrano (Madrid, 1964) obtained his Doctorate degree in Molecular Biology from the Universidad Autónoma de Madrid, Centro de Biología Molecular, under the supervision of Margarita Salas. Thereafter, Serrano joined the Cold Spring Harbor Laboratory (New York, USA) as a postdoctoral fellow where he discovered the p16 gene, one of the most important genes in the protection against cancer. Upon his return to Spain, he identified cellular senescence as one of cells’ main anti-cancer responses.

Serrano’s group has also been a pioneer in the generation of cancer? resistant genetically modified mice and in revealing the connection between those genes that protect against cancer and their role in protecting against ageing. He is recognised worldwide as a leading scientist in the field of tumour suppression.

Serrano’s research has allowed him to position himself internationally at the forefront of Spanish research. His studies have been cited more than 17,000 times and he has published 22 articles in prestigious journals such as Nature, Science and Cell. Serrano has received numerous international awards, including the FEBS Anniversary Prize (1999) and the Carcinogenesis Young Investigator Award (2000). Amongst the national awards he has received are the Echvarne Foundation’s National Oncology Prize (2003), the Banc Sabadell Foundation’s National Biomedical Research Prize (2006), and the Carmen & Severo Ochoa Foundation’s Prize (2007). In 2009, Serrano received the ERC Advanced Grant from the European Research Council, and he is an elected Member of the European Molecular Biology Organisation and a researcher at the Fundación Botín. 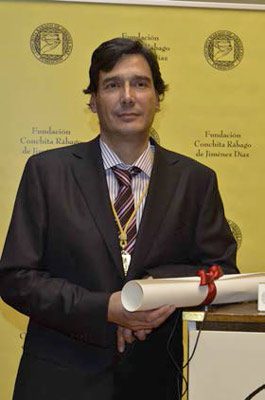