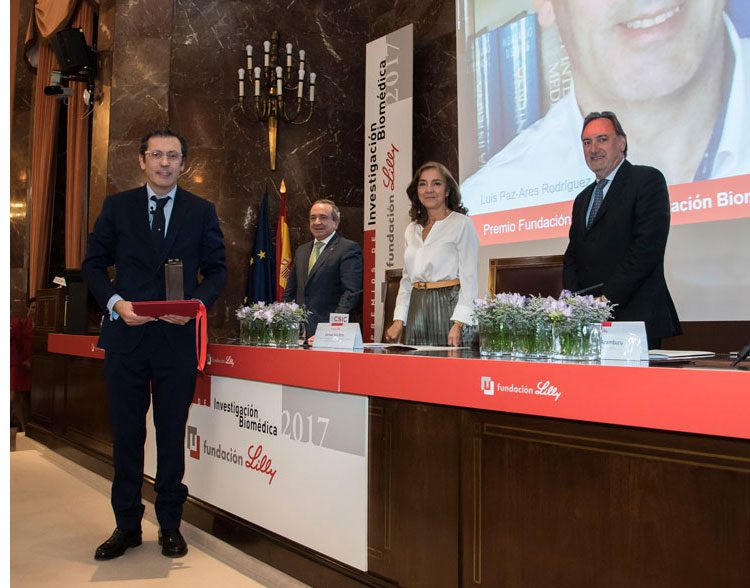 The Lilly Foundation Biomedical Research Awards 2017 ceremony was held yesterday. On this occasion, its 16th edition, the winners were Professors Luis Paz-Ares and Francisco Martínez Mojica, in the categories of Clinical and Preclinical Research, respectively. These awards recognize the scientific careers of researchers who contribute to the advancement of Biomedicine and the Health Sciences in Spain. The Secretary of State for Research, Development and Innovation, Carmen Vela, presided the ceremony that took place at the Consejo Superior de Investigaciones Científicas (CSIC – The Spanish National Research Council).

The oncologist, Luis Paz-Ares, head of the H12O-CNIO Lung Cancer Clinical Research Unit, head of the Medical Oncology Department at the University Hospital “12 de Octubre” in Madrid, and professor at the Complutense University of Madrid, has been recognized for his work in lung cancer. Regarding his scientific contribution, the director of the Lilly Foundation highlighted how “his contribution to the knowledge of the molecular biology of lung cancer and its treatment has resulted in a change of paradigm in the therapeutic approach to this disease; close to 25,000 new cases are diagnosed each year”.

In the Preclinical Research category, the Lilly Foundation awarded the prize to the researcher Francisco Martínez Mojica, professor of the Department of Physiology, Genetics and Microbiology at the University of Alicante, for his pioneering work on CRISPR technologies and the CRISPR-Cas system; genome editing tools that act as molecular scissors capable of cutting DNA sequences in the genome to insert changes, and that have revolutionized the field of Biomedicine and the Health Sciences.

As explained by Dr José Antonio Sacristán, director of the Lilly Foundation, “these awards were created with the purpose of acknowledging and encouraging researchers, but today, given the prestige of the award-winning scientists, they have also become proof that Spain is a centre of competitive and creative science with an international impact”.