For three weeks, they will be visiting several cities where they will meet American colleagues

The purpose is to study and promote the participation of women in science, technology, engineering, and mathematics

The US State Department has launched the International Visitor Leadership Program (IVLP) ‘Hidden No More: Empowering Women Leaders in STEM’ aimed at highlighting women who are leaders in scientific-technological fields. Forty-eight women from various countries were selected by this agency and have been visiting America for some days, participating in a wide range of activities aimed at sharing experiences and promoting the presence of women in these fields of study. Lola Martínez, head of the Flow Cytometry Unit at the Spanish National Cancer Research Centre (CNIO), is the Spanish representative.

“Women account for more than half of the population, but we are under-represented in or simply absent from many sectors of society, including STEM careers [Science, Technology, Engineering, and Mathematics],” writes Martínez from Pensacola (Florida), one of the stops on this three-week tour. “It’s about time we stop being the first woman in… and let talent, not gender, mark the difference when it comes to people in any area of society,” she adds.

However, that scenario, expressed by the Editorial Director of National Geographic, Susan Goldberg, during one of the meetings that Martínez and her colleagues attended, is still a pipe dream. One does not have to dig very deep to find proof. Here are two examples: once again, no women were awarded Nobel prizes this year, and women are more likely to be poor than men all over the world (in Spain too), according to the United Nations.
“The simple fact of sharing our life experiences has been overwhelming and has strengthened my idea that there is still a long way to go to achieve gender equality,” says Martínez. “In some countries more than others, but we are a globalised society, so we have to deal with this issue together in order to move forward.”
In addition to Washington DC and Pensacola, the group will visit Chicago and Los Angeles. During the tour, meetings were held –mostly- with women rom major universities, such as UCLA or Georgetown, companies like YouTube or Microsoft, national agencies, such as NASA, in addition to organisations that focus on supporting and promoting the presence of women and girls in STEM. All this, in addition to cultural activities and volunteering, discussion panels, and meetings with students and citizens.
“The Bureau of Educational and Cultural Affairs promotes mutual understanding between the US and other countries through educational, professional and cultural exchanges,” stressed sources from the State Department. This programme “explores ways of enhancing the participation of women and girls in STEM, it analyses the contribution of women to economic growth, and involves US scientists and engineers who support and guide women in STEM.”
“We live in an era of major challenges, such as climate change or cancer,” reflects Martínez. “Women deal with problems differently, and the combination of criteria, the assessment of the problem, and the strategies to solve it, will take us to the next level as a society. It is, therefore, crucial to raise awareness of the importance of women and promote science and technology among girls, because they are good at STEM and could be even better if we stopped educating them to be princesses.”
The ‘Hidden No More: Empowering Women in STEM’ programme has been inspired by the movie, Hidden Figures, which tells the story of three African American women whose contributions at NASA in the 1960s significantly contributed to the space race: Katherine Goble, mathematics, Mary Jackson, engineer, and Dorothy Vaughan, supervisor. 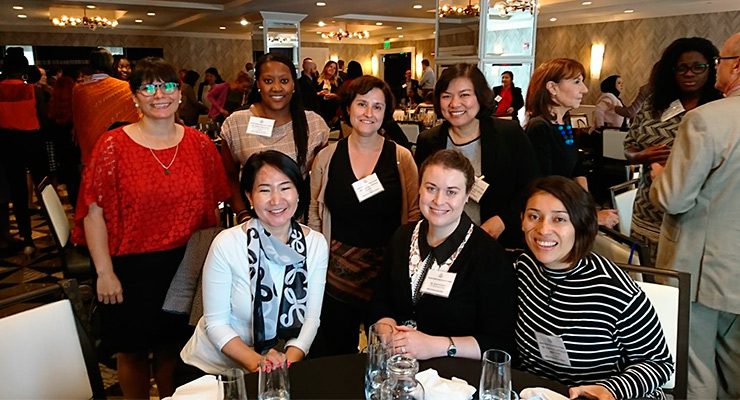 Some of the participants of the Hidden No More programme, including Lola Martínez (second from right in the back row) pose during one of the sessions. / CNIO