Lab Day, a day to celebrate our science

The CNIO celebrates its traditional Lab Day by recognizing the work of its researchers, especially the youngest ones

Almost 30 volunteers have been part of the evaluation committee, which reviewed more than 70 jobs

The day was supported by the Jesús Serra Foundation, Promega, eppendorf, Miltenyi Biotech and Cultek

As every year, the Spanish National Cancer Research Centre (CNIO) held its Lab Day on Monday 18, a day in which younger researchers have the opportunity to share their work, show their progress and receive recognition of colleagues for the achievements of the year. From the first coffee in the morning to the pizzas at the end of the day, Lab Day is a day of science and team spirit but also of emotive moments. The warmest moment came this year with Jorge Martinez Torrecuadrada when he received the supervolunteer award. The prize was presented by Valle Sallés, Chief Executive of Juegaterapia. 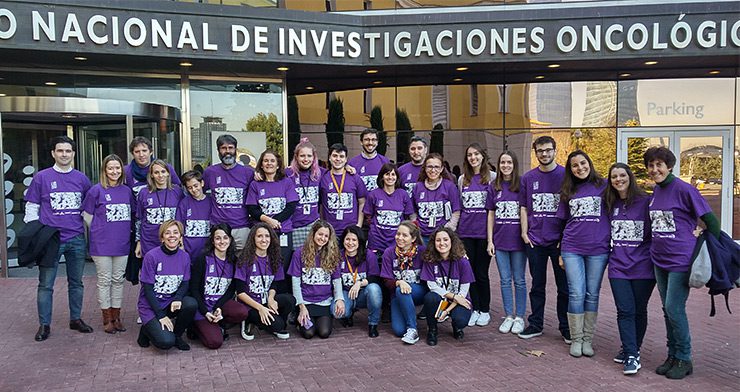 “The Lab Day is always a special event for the CNIO, but this year even more so, for the number and quality of the presentations we had”, explains Marisol Soengas, head of the Melanoma Group and head of the Dean’s Office for Academic Affairs at the CNIO. The figures have been record: more than 70 studies presented and an evaluation committee formed by 29 researchers coordinated by Francisco X. Real, head of the Epithelial Carcinogenesis Group. With this volume and level of participation, Soengas emphasizes, “it was really hard to chose awardees for the Best Talks and Poster Presentations”, which were shown during the morning.
The afternoon session began with a talk by the director, Maria Blasco, who presented the Center’s most relevant data of the year, such as the remodeling of the Structural Biology Programme with the incorporation of its new director, Óscar Llorca, and the group leaders Iván Plaza and Rafael Fernández Leiro; the growth of the CNIO Friends initiative, which will finance two new contracts for postdoctoral researchers starting in January; or the implementation of the educational project CNIO & The City.
“I want to thank all the staff of the CNIO who has participated in one way or another in this day and my congratulations to all the winners,” says Blasco. “I would also like to make special mention of the Agüera Nieto family and Juegaterapia for their involvement in this event, with CNIO Friends and with the Center in general.”
List of awards:
* Excellence in Research by PhD Students:
* Excellence in Research by Postdoctoral Fellows/Staff Investigators:

David Olmeda, from the Melanoma Group, for his research on the visualization of metastasis in melanoma; a work published in Nature that appeared in dozens of media and has had a great impact on society.

* Outstanding Contributions to Outreach and Awareness at CNIO:

The supervolunteer of the year was Jorge L. Martínez Torrecuadrada, coordinator of the European Night of the Researchers 2017 at the CNIO and active participant in other science outreach activities. The award was presented by Valle Sallés, Chief Executive of the Juegaterapia Foundation.

After the awards ceremony, a round table was held on the research career that was chaired by Héctor Peinado, head of the Metastasis and Microenvironment Group, and Anabel Sanz, head of Transfer, and which included the intervention of Eduardo Oliver, of the Society of Spanish Researchers in the United Kingdom (SRUK / CERU), and Patricia Salama, European Patent Attorney in Elzaburu.
“Personally, it was a pleasure to enjoy the spirit of team building, and importantly, of being proud of belonging to the CNIO community. We do not have to leave the centre to learn about sophisticated computational analyses of drug targets, state-of-the-art animal models, mechanistic insight on novel biomarkers of tumor progression and metastasis, or clinical studies in large patient cohorts”, highlights Soengas.
In addition to the efforts of the volunteers, the evaluators and the participants in all the categories, the Lab Day had the support of the Jesús Serra Foundation, Promega, eppendorf, Miltenyi Biotech and Cultek.