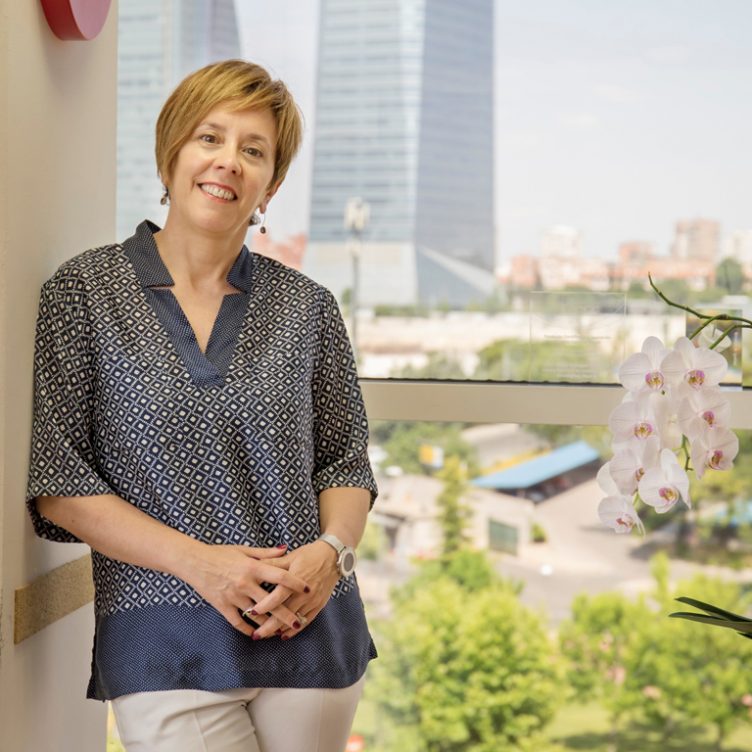 The Melanoma Group headed up by Marisol Soengas at the CNIO has received 500,000 euros in funding from the Health Research Programme of “La Caixa” Foundation, to describe the immune mechanisms that favour tumour progression and propose therapeutic strategies to block them

“We have identified new pro-metastatic factors that modulate the immune system, and now we are interested in their translational impact,” Soengas explains. “To do this, we will describe the mechanisms that regulate these signals, and try to validate compounds that might block them”

In this round of funding, the Foundation also selected an IRB project involving Óscar Llorca, Head of the CNIO Macromolecular Complexes in DNA Damage Response Group, to use cryo-electron microscopy to further our understanding of brain physiology

The Health Research Funding Programme launched by “La Caixa” Foundation has received 600 proposals this year in the area of biomedical research, selecting 25 in a rigorous selection process based on the scientific excellence of the projects and their strong potential and social impact

A project led by Marisol Soengas, Head of the Melanoma Group at Spanish National Cancer Research Centre (CNIO), has just received funding of 500,000 euros through the Health Research Funding Programme launched by “la Caixa” Foundation, to identify new genes responsible for the progression of melanoma and better understand its capacity for metastasis, focusing particularly on the mechanisms that modulate the immune system and that, instead of attacking the tumour, contribute to its growth. The project will be developed over the next 3 years.

Recovering the activity of the immune system to fight melanoma

Melanoma is the most aggressive and metastatic type of skin tumour: lesions just over a millimetre thick are able to spread throughout the body, and metastasis is usually the leading cause of death. Although biomedical research has improved patient survival, there are still no molecular markers to predict disease development or the early stages of its spread.

Soengas heads up the world’s leading research group in the study of this type of tumour, describing the genes that define the metastatic identity of melanoma and focusing on intervention in the earlier stages of the disease to eliminate metastasis after it has begun. The team has also managed to flag a hotspot that allows them to see where and how metastasis occurs thanks to their bioluminescent mouse model Metalert, a significative research endeavour combining basic and clinical research with international collaboration that was reported in Nature, one of the world’s leading scientific journals. Now, they can take their research a step further.

“We have identified new pro-metastatic factors that modulate the immune system, and now we are interested in their translational impact,” Soengas explains. “To do this, we will analyse the immune system signals that allow melanoma to progress, describe the mechanisms that regulate these signals, and try to validate compounds that might block them”.

A project proposed by IRB Barcelona, with the participation of Óscar Llorca, Head of the  Macromolecular Complexes in DNA Damage Response Group, has also been selected to receive funding through this programme. The team, coordinated by Manuel Palacín from IRB, will describe the atomic structure of a protein that is key in neural activation and that, under abnormal conditions, affects the degradation of neurons. This protein is, therefore, in the spotlight when it comes to developing drugs against neurological diseases such as Alzheimer’s or Schizophrenia and may also play an important role in neural recovery from stroke injuries. “We will use cryo-electron microscopy to define for the first time the atomic structure of this protein at a high resolution and to confirm its role in brain physiology,” explains Llorca. “This will also allow us to improve the design of drugs aimed at blocking its abnormal functioning in conditions such as stroke, Alzheimer’s disease, or Schizophrenia.” The project will have a length of 3 years.

In total, “la Caixa” Foundation has allocated 18 million euros to 25 projects through its Health Research Funding Programme. Since the programme was first launched back in 2017, the Foundation has awarded close to 50 million euros to 75 innovative and socially-impacting research projects, in the only health research funding programme currently operating within the Iberian Peninsula. The high level of funding made available for these initiatives means that they are great opportunities for cutting-edge transformative research. The selection process prioritises projects that can deliver scientific excellence and offer the greatest potential and social impact in the field of research, whether basic, clinical or translational, through a system that meets the highest standards of quality, impartiality, rigour, and transparency.

The institution has highlighted the strong take-up for their call for proposals, with a total of 600 projects submitted, which demonstrates the importance of supporting outstanding initiatives and promoting projects focused on fighting diseases that have the greatest global impact and on the development of biomedical technologies.