Helping to understand cancer from scientific and philosophical perspectives 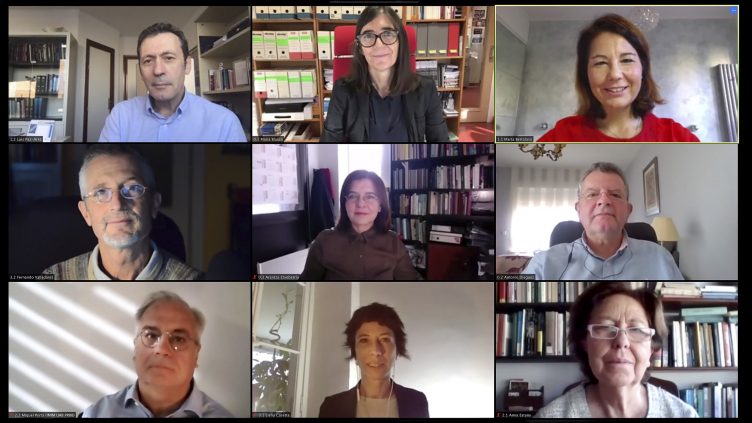 With the support of the Banco Sabadell Foundation, four researchers and five philosophers engage in a debate on the challenge posed by cancer at the Spanish National Cancer Research Centre (CNIO)

During the meeting, cancer was approached from a philosophical and scientific perspective, as were the socio-environmental factors of health and disease

Do we really understand cancer in terms of the molecular processes underlying it? Do we know how a patient’s socio-environmental factors affect this understanding? Four scientists and five philosophers participated in a debate on this question in the online Workshop on Philosophy, Science and Medicine: socio-environmental factors of health and disease organised by the Spanish National Cancer Research Centre (CNIO), with the support of the Banco Sabadell Foundation. It aimed to bring philosophy closer to scientific practice and to encourage philosophical research in areas such as cancer, biodiversity and public health, to achieve a better and deeper understanding of this disease.

In a first session, moderated by CNIO director Maria A. Blasco, cancer was approached from a philosophical and scientific perspective. Marta Bertolaso, professor of Philosophy of Science at the University Campus Bio-Medico in Rome (Italy), addressed the trends that are converging towards a new conceptual framework to define cancer, and Luis Paz-Ares, Head of the H12O-CNIO Lung Cancer Clinical Research Unit spoke about difficult tumours and how life expectancy and quality of life of patients have been improved.

“Cancer is not a collection of molecular components or a mere process,” argued Marta Bertolaso, “but an interruption of the ongoing relational interactions that make up an organism, of the natural history of the organism.” According to this philosopher, “the biology of cancer can really contribute to an understanding of pathophysiological phenomena.”

For his part, Luis Paz-Ares noted that although the incidence of cancer is increasing, the situation for patients is improving, since survival has increased. In Spain, for example, the 5-year survival rate is 61.7% for women and 55.3% for men, he pointed out. “The important thing for the patient is not to survive some more months, but to have the hope of surviving over the long term or even of being cured,” the scientist said. “There is a change of paradigm in the perception of cancer: we are not looking at the tumour itself but at the landscape, the microenvironment,” he added.

The second session, on socio-environmental factors of health and illness, was moderated by Antonio Diéguez, Professor of Logic and Philosophy of Science at the University of Malaga. Anna Estany, Emeritus Professor of Philosophy at the Autonomous University of Barcelona, spoke of a new epistemology for design sciences (sciences that seek to transform reality) as a good tool for the methodological understanding of public health research. Miquel Porta, Head of the Clinical and Molecular Epidemiology of Cancer Unit at the Municipal Institute of Medical Research (IMIM) in Barcelona, gave examples of studies that integrate the clinical, social and environmental causes of cancer. Miquel Porta defended the viewpoint that “primary prevention is the only way to reduce the incidence of the disease,” while criticising the effort to develop diagnoses and treatments for cancer that are limited to genetics, without taking into account that the aetiology of most diseases is rooted in contaminants, especially plastics and other human-made products. In this vein, he stressed that less emphasis should be placed on individual “lifestyles” and more on the “environmental conditions” that generate stark inequalities in health and disease of the population that are linked to poverty and social class. “We must take environmental and social factors into account when analysing the risk for disease,” he added.

To conclude the meeting, Arantza Etxeberria, Associate Professor of Philosophy of Science at the University of the Basque Country (UPV-EHU), moderated a session on evolution, environment and biodiversity. In this session, Elena Casetta, a specialist in the philosophy of biology and Professor at the University of Turin (Italy), reviewed the origin of the term biodiversity, a neologism coined to help preserve the variety of life at all levels, which is considered an intrinsic value of life. Conservation biology and other disciplines are now studying how to measure and conceptualise these forms of diversity, but the speaker deemed that there is evidence to show the importance of the quality of the environment for human health and spoke of the “cure” of biodiversity.

Fernando Valladares, Head of the Ecology and Global Change Group of the National Museum of Natural Sciences (MNCN-CSIC), addressed the ecological bases of planetary health. He emphasised that the health of ecosystems depends more on the functional connections between their constituent parts than on the quantitative diversity of different species. While Elena Casetta stressed how “biodiversity protects us from viruses and infections, and is very beneficial to human well-being,” Fernando Valladares called attention to the increased risk of infections as a result of climate change: “It is cheaper to conserve nature than to deal with pandemics,” he concluded.