Home | News | CNIO Friends | ‘Excelentes’: A book of portraits on ideas that drive the world

‘Excelentes’: A book of portraits on ideas that drive the world 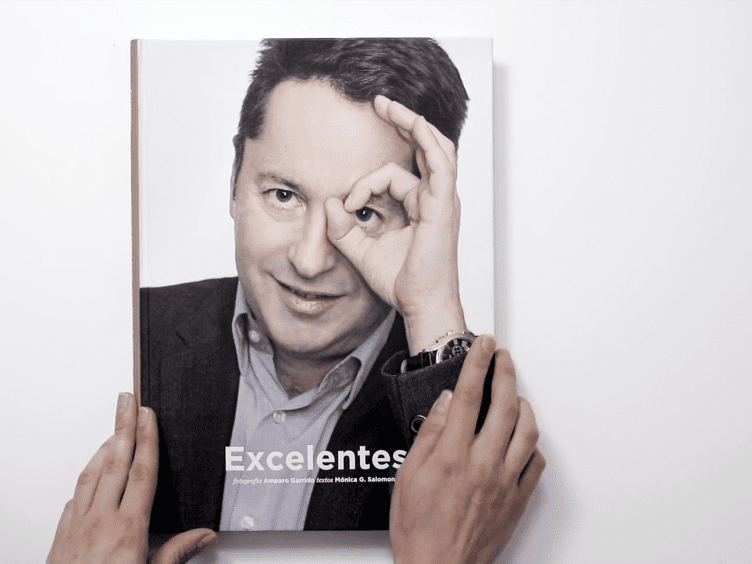 It is a work of great artistic quality and visual impact that shows the faces and includes the thoughts of scientists who investigate cancer, our origins as a species, or how matter behaves at the quantum level, among other issues. There are molecular biologists - Elizabeth Blackburn and Paul Nurse, both Nobel Prize winners -; physicists; a palaeontologist - Juan Luis Arsuaga -; mathematicians, doctors... And there are also experts in other fields: the mountaineer, Edurne Pasaban, and the jurist, María Teresa Fernández de la Vega.

The portraits are the work of the visual artist, Amparo Garrido. The texts, mostly based on personal interviews, were written by the journalist, Monica G. Salomone.

Excelentes is already on sale at such stores as El Corte Inglés, VIPS, and at http://store.cnio.es. All the funds will go to the 'Friends of CNIO' initiative for cancer research.

The presentation of Excelentes will take place on Thursday, 9 February, at 19:00, at El Corte Inglés de Preciados - Callao (Madrid), moderated by Mago More, and with the presence of some of the people involved in the work.

Where do the ideas that expand our vision of the world come from? What lies behind discoveries, technological progress, great social change? The answer is: people. People with ideas, with emotions, and with a way of processing reality. However, when a discovery is announced, the intangible spark with which that advance originated is hardly ever mentioned, nor the mental process involved in the minds of those who made it possible. Were there any doubts? What role did perseverance, inspiration, effort… freedom play? The book Excelentes explains all this through the portraits and biographies of some of the most influential people who have visited the Spanish National Cancer Research Centre (CNIO) in recent years.

There are physicists, such as Ignacio Cirac, who, from the cover, invites you to turn to pages full of unexpected ideas. There are three Nobel laureates: Elizabeth Blackburn, Robert Huber and Paul Nurse. There is a palaeoanthropologist, Juan Luis Arsuaga, who explores our origins as a species. There are molecular biologists, mathematicians, and computer experts who are laying the bases of the medicine of the future. There is also a Spanish mountaineer – Edurne Pasaban – and a jurist committed to equal opportunities – María Teresa Fernández de la Vega.

All of them have contributed to improving our conditions of life and to the advancement of knowledge. In the opinion of María A. Blasco, Director of the CNIO, telling their personal stories in a work of great artistic quality and visual impact, such as Excelentes, is a way of opening the world of scientists to the general public, and to convey that what is important in that world has much in common with what is important in other fields.

The title of the book refers to one of these common points: excellence. “At the CNIO we strive for excellence”, says Blasco; “being excellent involves going that little bit further, seeking the missing piece of the puzzle. Our visitors have shown us that the ingredients of excellence are not unique to science: they are a way of thinking and feeling applicable to any field. In this book, we share the secret of how to achieve excellence, exactly as the people who told us their stories clearly have. They have inspired us and we hope they will be inspirational to you, too.”

“Do not be afraid to ask for help, nor to ignore it,” Elizabeth Blackburn tells young researchers, convinced that confidence in one’s own ideas is essential. “Many people don’t like anything daring and innovative,” says Paul Nurse. “You are not born with a vocation, you make it happen,” says Margarita Salas.

The portraits in Excelentes are the work of the visual artist, Amparo Garrido. They are images with “the power to evoke the inner self,” in the words of Blasco. The texts, based on personal interviews, were written by the journalist, Monica G. Salomone.

The CNIO, one of the most productive cancer research centres in the world, is a meeting place for people with innovative ideas and initiatives that are often rule-breaking. The protagonists of Excelentes visited the CNIO either to participate in the prestigious CNIO Distinguished Seminars or they were invited by the CNIO Women and Science Office (WISE), which combats gender stereotypes and encourages more women to embark on scientific careers at the highest levels.

Excelentes is also a way to celebrate the success of the ‘Friends of CNIO’ philanthropic platform, launched at the end of 2014 and that has become, according to Blasco: “one of the most exciting adventures at our centre”. The funds raised from this book will be entirely dedicated to cancer research at the CNIO, and more specifically to this platform which has made several postdoctoral contracts possible, which shows that when “the efforts of the research community and society’s will to cooperate are combined, the results can be very powerful.”

At the presentation of the book, next Thursday, 9 February, at 19:00, at El Corte Inglés de Preciados-Callao (entre through Calle del Carmen, 7th floor), we will be able to enjoy the wit and humour of Mago More, who will be the master of ceremonies. In addition to María A. Blasco and the authors, Amparo Garrido and Monica G. Salomone, some of the Excelentes will be present.